Research conducted by Justine Curcio '22 and Francis Ripley '23 under the guidance of Lt. Col. Pennie Ticen and Maj. Jeff Kozak.

While the depression is considered a part of American history, the research displayed in the Change’s to VMI’s Physical Footprint reveals that large portions of the VMI’s campus were changed, improved, or constructed. In our final section of Cadet Life, our research overviews the overall day of a Cadet, detailing when they woke up, their class schedule, and events. Our research touches upon the student revolt or “step off” detailed by George C. Scott.

At the beginning of the depression in 1929 the number of Cadets enrolled at VMI totaled 705 with an additional 78 students who did not make it through the year due to Honor violations, academic drop-outs, and freshman (also known as 4th classmen or rats) who dropped out. These 78 students are labeled as “casualties” in the VMI Annual Reports. These numbers were compared to the mid-depression statistics of 1936 where 599 cadets were enrolled with only 35 casualties.

There continued to be only four available majors at VMI throughout the depression period - Mechanical, Chemical, and Civil Engineering with a broad major degree offered as Liberal Arts. The number of employed professors in 1929 was 47 compared to a significant jump in employment of professors in 1936 of 62 professors. All of these statistics were taken from the Annual Reports from 1929-1930 and 1935-1936. 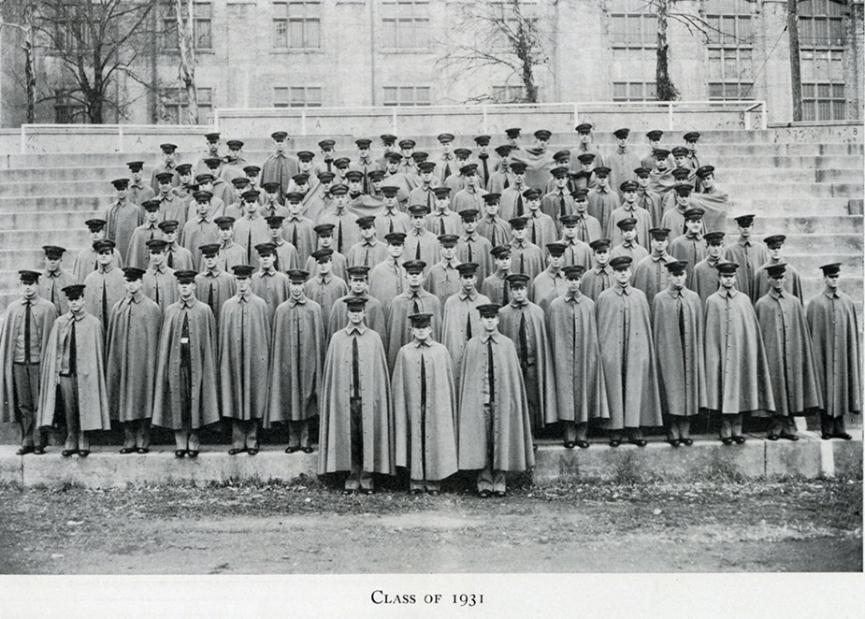 While the Wall Street Crash of 1929 sparked the Depression in many major cities across the U.S., VMI’s finances remained largely unaffected in the early years of the Depression. When the current Governor of Virginia, Governor John Pollard, called for cuts to the faculty’s pay, and the federal government mandated that classes would need to be cut from the curriculum, VMI was able to find ways around these issues in order to support their staff and the cadets. There were some auxiliary services that saw cuts, but VMI largely stayed away from cutting services that would have a derogatory impact on the Corps. Following these issues, VMI expanded its good fortune to the surrounding town of Lexington. There were so many federal outreach efforts that many of Lexington’s citizens couldn’t even name them. VMI had a lot of work to be done, both construction and clerical. They hired women for clerical work during a two-year span and provided them with a steady income, as outlined in the Superintendent’s Annual Report. 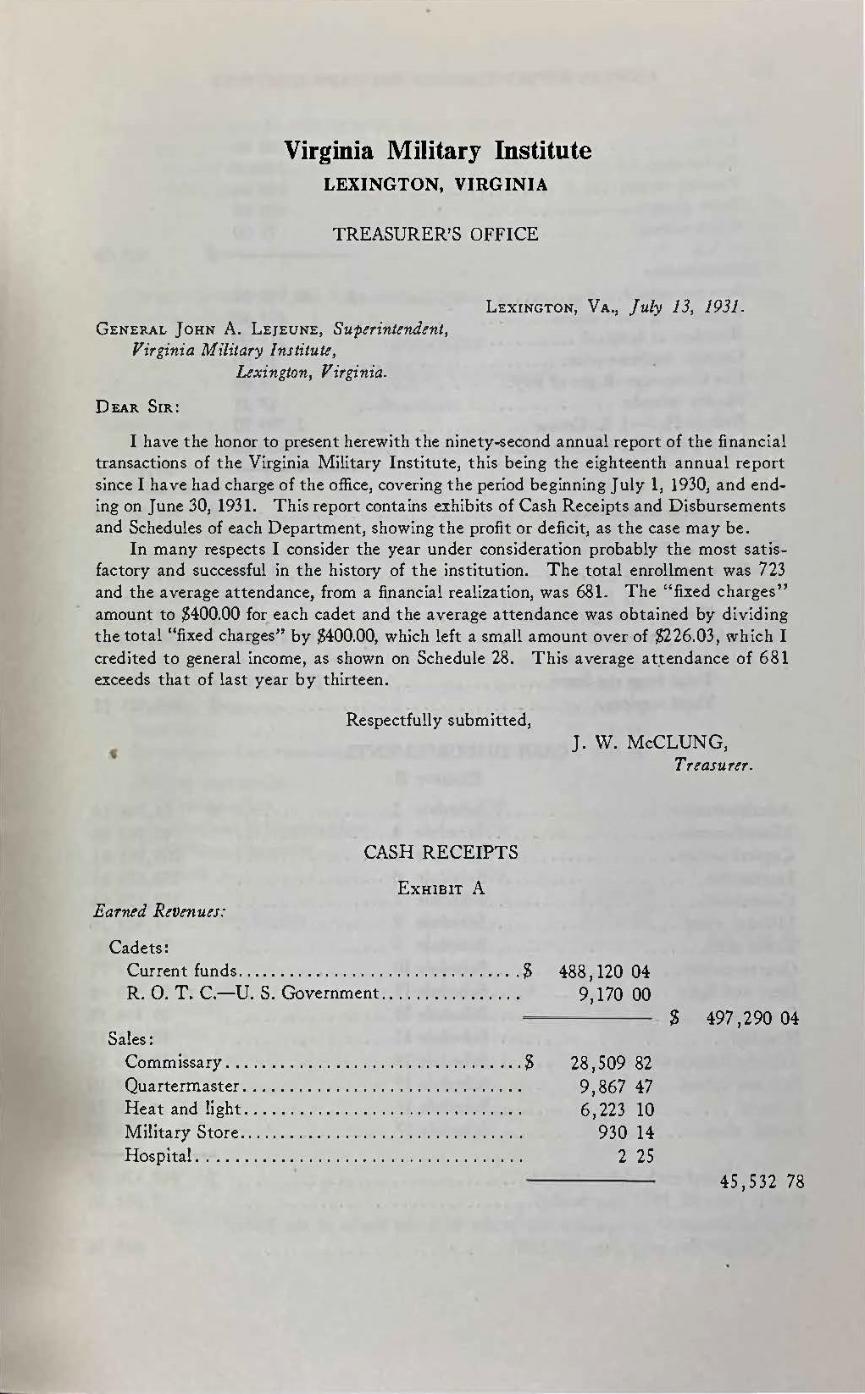 VMI underwent many changes in the late 1920s and early 1930s, both seen and unseen. This largely took place under the supervision of the Superintendent, Lieutenant General John Lejune in response to a 1933-34 federal subsidization policy that provided grants to select government-owned facilities, so long as the institution itself covered some of the cost. VMI fulfilled this requirement by borrowing $406738, represented by bonds in the Institute’s financial reports. A report was made by the superintendent in 1937 that outlines all physical developments at VMI since 1927. The costliest improvement was the redesign and fireproofing of the Cadet barracks, followed closely in cost by the construction of the new Engineering Building, Nichols Hall. The Mess Hall (Crozet Hall) and Laundry buildings (Richardson Hall) were also built during this time, with many other facilities rebuilt, beautified, or enlarged. VMI also expanded their land, buying a lot on Letcher Avenue, the Pratt property, and the Wm. A. Anderson house for $25,500. 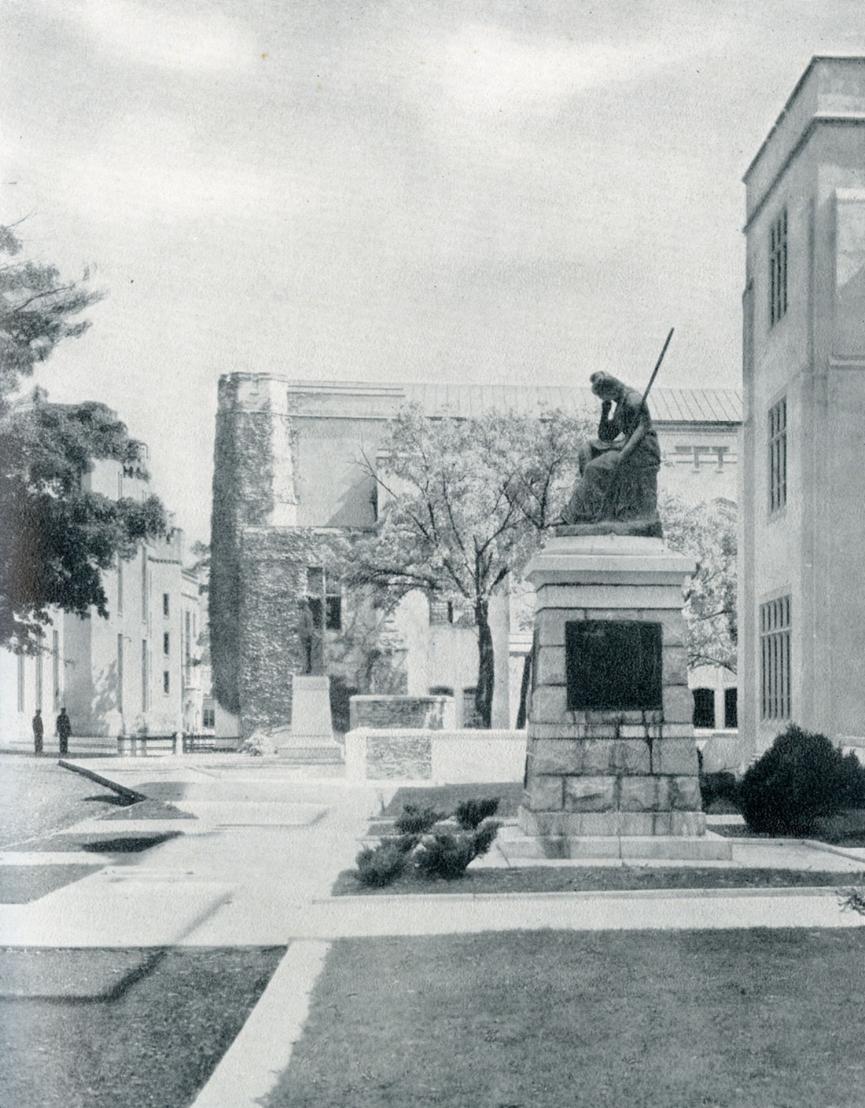 Cadet life during The Great Depression was relatively unhindered by outside circumstances. The following information was taken from the Simeon O. Coxe Jr. letters home to his parents in Alabama, which they kept and filed away and then donated back to the Institute's archives. Cadets woke up at 6 A.M. every day and marched down to breakfast in Crozet dining Hall. Cadets were enrolled in classes six days a week, with the only off day being Sunday.

The student body was divided into six military companies labeled from A to F with the Freshman or Rats in each company rotating through athletic events weekly. George C. Scott Jr. details the cadet revolt or “step off” just before the depression in 1927. Generally, the step off brought no change and was quelled by Alumni from Richmond, calming the Cadets and explaining the tarnished reputation they had brought to The Institute.