Research conducted by Michael Tempesta '22 and Lancelot Wiemann '22 under the guidance of Lt. Col. Pennie Ticen and Maj. Jeff Kozak.

• Many VMI graduates and former cadets served honorably in World War I, earning numerous decorations, holding high commands, and otherwise distinguishing themselves and the Institute. Over 50 VMI alumni were killed in action during the years that the United States was involved in the war. One of those men was Thomas Amory, a member of VMI’s class of 1916. Killed in action near Verdun, France in October of 1918, Amory would go on to receive the Distinguished Service Cross, the nation’s second highest military honor.

Thomas Dwyer Amory matriculated at VMI with the class of 1914 in the fall semester of 1910. As a rat, Amory was a member of B Company, and studied chemistry. His third-class year, Amory held rank in the corps of cadets as a corporal in D company. Amory lost his rank in December of 1911 when he was caught absent from barracks during study hours. He struggled with academics during this time, ranking 70 out of 74 in his class. At the end of his third-class year, Amory left VMI and transferred to Cornell University.

At Cornell, Amory studied mechanical engineering and was a member of the Gamma Theta fraternity. Again, he struggled with academics, and left Cornell at the end of the 1913 school year. He matriculated at VMI for a second time with the class of 1916 in the fall of 1914, entering as a second classman. More active in Institute activities this time around, Amory was a member of the basketball and baseball teams on post. Amory was a member of A company his second-class year and a member of F company his first-class year. He made it to the end of his first-class year and ultimately came up one class short of graduating. Though Amory would never receive a VMI diploma, he was given a letter from then Superintendent, Lieutenant General Nichols, that he completed all classes required for a degree except for calculus. This allowed him to receive a field commission in the Army. 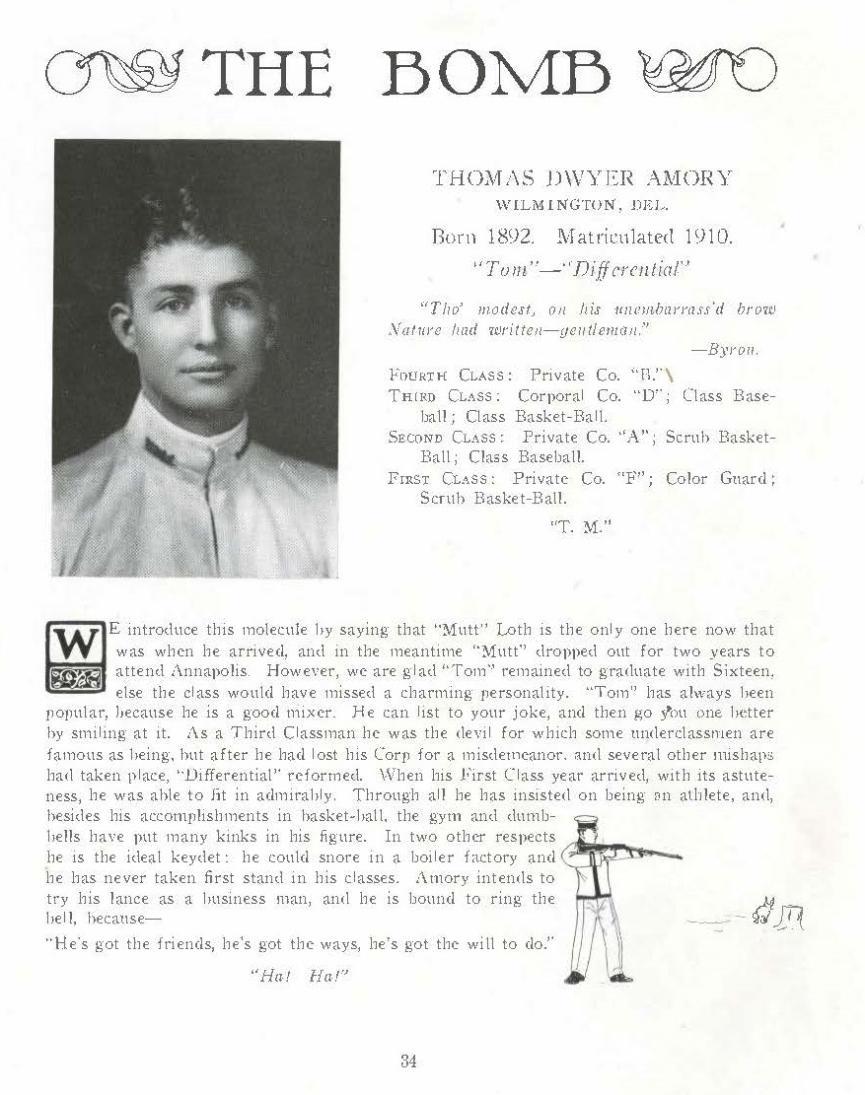 Unable to pass calculus, Amory fell short of obtaining his VMI diploma by a single course. Amory’s father, dismayed with the school’s decision to withhold Amory’s diploma, appealed in the hopes of convincing the administration to change its decision. Amory’s father wrote to VMI’s Superintendent, General Nichols, asking for an exception to be made. General Nichols insisted that nothing could be done, as state law mandated all VMI cadets to complete a set of required courses before obtaining a VMI diploma.

In the fall of 1916, Amory set off to Boston to work as a chemist. When the United States entered World War I, Amory decided to enlist in the army. Taking note of Amory’s extensive military training that he had received at VMI, the Army sent Amory to officer training camp in Plattsburg, New York. The letter he had received from General Nichols allowed him to be eligible for a commission, and by September of 1917, Amory was commissioned as a Second Lieutenant in the Infantry Branch. Shortly after this, Amory shipped out to France to fight in the war.

In September of 1917, Amory was shipped to France and upon arrival, was assigned to D Company, 26th Infantry Regiment, 1st Infantry Division. He trained as a scout at the 5th British School in Belgium, and shortly thereafter began serving as a Scout Officer under Major Theodore Roosevelt Jr., the son of former president Theodore Roosevelt. Amory quickly gained a reputation in his unit for being one of the most dependable officers there, often volunteering to lead dangerous expeditions into enemy territory.

On October 2nd, 1918, Amory was tasked to lead a patrol of 64 men through the Argonne Forest, northeast of the town of Verdun. A major assault was being planned for the morning of October 4th, and commanders needed information about enemy strength and disposition. As they advanced, his troops came under machine gun fire from all sides. Without artillery support, Amory led the patrol two kilometers forward while under intense machine gun and artillery fire. Amory personally cleared one machine gun nest, killing the crew. As he moved towards another machine gun nest located in a house, he was struck by a machine-gun bullet and killed. His last words were: “We will take that nest or die trying”. 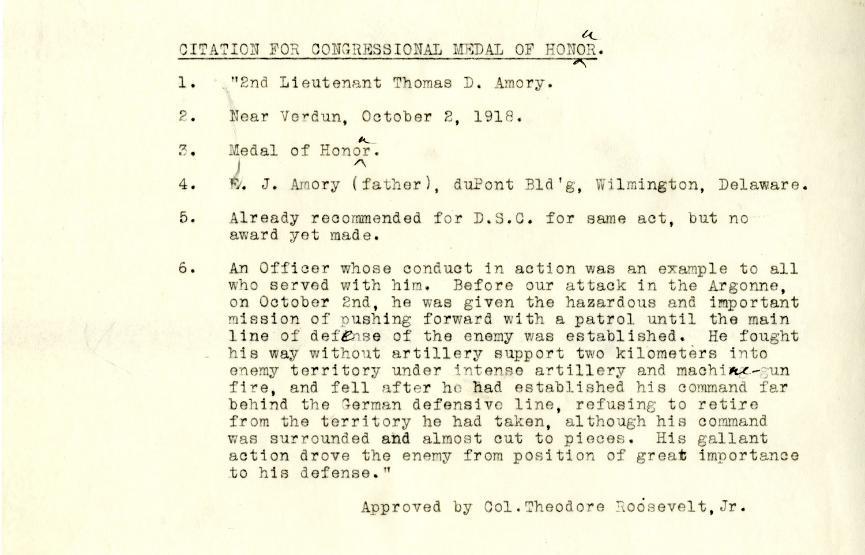 Citation for Congressional Medal of Honor, explaining the circumstances of Amory’s actions and death on Oct. 2, 1918, Part of the VMI Archives. PDF Version of Amory Citation.

After his death, Amory was recommended for the Medal of Honor and the Distinguished Service Cross, the two highest military awards for valor, respectively. His citation for the Medal of Honor, written by Colonel Roosevelt, claimed that his “conduct in action was an example to all who served with him”. Upon returning from the patrol that killed Amory, his sergeant, in tears, remarked that Amory was “the best officer God ever made”. Amory would go on to receive the Distinguished Service Cross, but he was not awarded the Medal of Honor.

In January of 1919, General John J. “Black Jack” Pershing published a list of 100 men who had distinguished themselves in combat. The list was dubbed “Pershing’s Hundred” and was published widely in magazines and newspapers all over the United States. Amory was number 3 on this list.

A poem was written in honor of Amory by a fellow officer from the 26th Infantry Regiment. Initially given to Amory’s father in a letter of condolence, it eventually found publication in a collection of memorial poems from the war. It is but one of the many ways that Amory was memorialized after his heroic death. 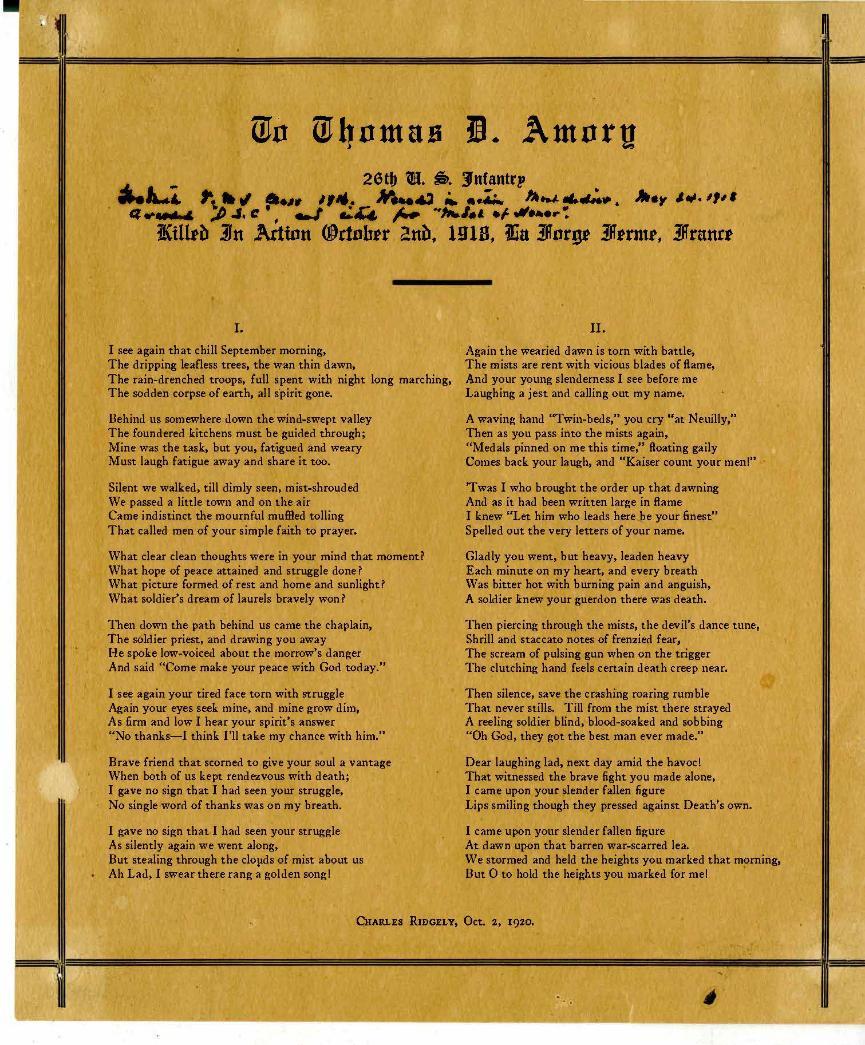