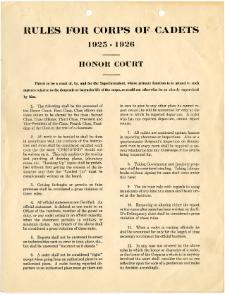 Although the administration of the VMI honor system has evolved since the founding of the Institute in 1839, the concept of honor has always been integral to the VMI experience. The ideas expressed in the following excerpt from a recent VMI Honor Code publication would be familiar to a cadet of the 1840's.

"The purpose of the Honor Code is to maintain the high standards traditionally attributed to VMI cadets by seeking to instill in all cadets the desire to conduct themselves according to the code of an honorable cadet, who will NEITHER LIE, CHEAT, STEAL, NOR TOLERATE THOSE WHO DO." All cadets should be able to determine right from wrong, and thus be able themselves to arrive at honorable answers to their questions.  The Code is the heart of VMI."

The Historical Development of the VMI Honor System:

"I deem it of great importance to the tone of the Corps of Cadets to get re-established among them the Code of Honor.  Several cadets have brought the subject to my attention."

"Probably the greatest asset of a man's character, and one which stands out in every VMI man, is honor. This is a trait not recently acquired, but the product of a rigid system of honor rules which have been respected and obeyed by the corps for years....The honor system is not a novel feature; ever since the foundation of VMI there has been some form of it. From 1839 to 1870 the corps at large controlled such matters as were brought before it. In 1870 the real formation of an honor court took place and it has functioned ever since." (The Cadet, 1925 September 28)