Sigel is moving up the Valley--was at Strasburg last night. I cannot tell you whether this is his destination. I would be glad to have your assistance at once with the cadets and the section of artillery. Bring all the forage and rations you can . . .

With these few words the Virginia Military Institute and the Battle of New Market are irrevocably linked. That spring of 1864 the stakes were higher than they had ever been and so were the expectations; not like previous years when the classroom monotony was occasionally broken up by Union cavalry in the county. But still youthful bravado reigned supreme at V.M.I. and many saw the barracks as less than glorious. Major General Breckinridge required their battalion to bolster his understrength force of only about 5,000 men. His opponent, Major General Franz Sigel, and his seemingly limitless force of almost 9,000 men was heading south-- up the Valley.

The severity of battle is no respecter of persons. By mid-afternoon the battalion could see the Union line on Bushong’s Hill. General Sigel attempted to capitalize on a break in the Confederate line by moving his troops forward. His infantry attack was repulsed when the break was filled by the VMI Cadet Corps and other reserve units. Now the entire Confederate line stormed across a rain-soaked wheat field—the Field of Lost Shoes.

The cadets wrestled a cannon away from Von Kleiser’s Battery B, 30th NY after a brief but decisive period of close quarter fighting. By end of the day, the battalion had suffered 47 wounded out of 257, with five dying and five more succumbing to their wounds later on.

For the family whose farm had been at the storm’s center, The Bushongs mended fence, went back to work and eventually opened a tourist home in the 1930’s called Battlefield House to cater to the increasing flood of visitors. Guests stayed in the old house, slept on their beds and were regaled with stories of the battle over supper in the dining room. This ensured that the battlefield and the historic house survived for another generation, but that future was unsure indeed.

On April 27, 1942, the Bushong Farm was sold to Mr. Everette H. Croxton of Washington, D.C. This historic property made famous by the battle and the VMI Cadets seventy-eight years earlier would need another preservation champion, and he would come from an unlikely place. 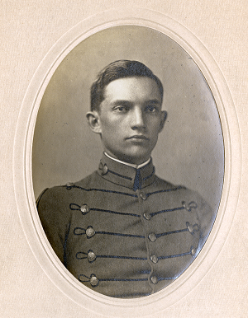 George Randall Collins was born in 1890 in Goodwill, West Virginia and it was his mother’s wish that he would be liberally educated at VMI and perhaps at the University of Virginia. He stayed at VMI and graduated on June 21, 1911—ninth standing.

After graduation he was actively engaged in his business interests, eventually rising to Vice President and GM of the Superior Portland Cement Company of Cincinnati and Superior, Ohio.

The Great War interrupted his civilian pursuits. He eventually received a commission as a 2nd Lieutenant in the Field Artillery and was deployed overseas to France. He went into the lines at Metz with the 351st Field artillery until the Armistice about 17 days later.

With peace came new opportunities for Collins. He became the leader of no less than four companies. He was the president of: Triple Seam Land Company, Smokeless Fuel Company, Winding Gulf Collieries, and the Lomar Colliery Company. These firms proved very successful enterprises and were the main source of his future estate.

Collins found out about the sale of the Bushong Farm in 1942 and pursued the new owners to buy it. On August 4, 1944 Collins purchased the old Bushong Farm on 120 ¼ acres and on the 9th of August he purchased an additional 9 acres.

In a letter dated August 22, 1944 to VMI’s Superintendent, General C. E. Kilbourne, Collins writes, “For the last two years I have been negotiating off and on with Everette H. Croxton, of Washington, D.C who bought the place from the Bushongs and at last (have) succeeded in purchasing it from him. I have just gotten the deeds to the place myself and feel a little pride in the ownership of the place, as you can naturally understand.”

Collins had owned the Bushong Farm for scarcely over a decade before his first preservation challenge presented itself in the late 1950’s. The new Interstate 81 which started in 1959, with small stretches in Buchannon and Harrisonburg, Virginia was beginning to grow and with it, concern for what would happen along that corridor. Since the Collins property was located north of Harrisonburg and along the projected route north, he began to meet with VMI staff about how to redirect the highway so that it would do the least amount of damage to the farm and site of the future battlefield park. Thanks to his tenacity the south bound lane was moved to the east, providing a modest buffer between the tarmac and the house.

To ensure that the Bushong Farm, original houses and 171 acres of battlefield property were preserved forever, he established a trust deeding his property and estate to the Virginia Military Institute. At his death on June 27, 1964, ironically the centennial of the Battle of New Market, his will revealed his true intent for his property. 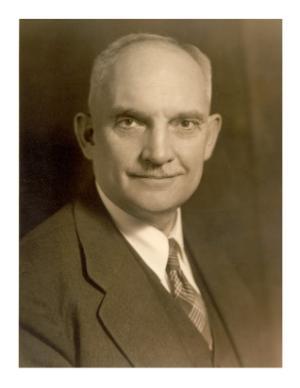 When his will was probated it was found to contain the following:

“…I give devise and bequeath the remainder of my Estate to the Virginia Military Institute, Lexington, Virginia to be used as a trust to perpetuate and maintain as a Memorial of the Battle of New Market and to place improvements thereon for educational purposes…”

Collins’ estate of three million dollars, a large sum for the 1960s, was used to build the distinctive Virginia Museum of the Civil War and to make those education and interpretive improvements mentioned in his will. Today his legacy continues to inspire VMI Cadets and visitors from literally around the world. The Virginia Museum of the Civil War, New Market Battlefield State Historical Park, and restored Bushong Farm tell what life was like in the Shenandoah Valley before and during the Civil War.

Today it is common for a new museum to be opened through the efforts of an august body of philanthropists. Seventy-four years ago one man with a vision named George Randall Collins embraced a unique opportunity to save the Bushong Farm and core battlefield property at New Market. His gift constituted the first major act of battlefield preservation in the Shenandoah Valley. Collins’ vision and commitment continues to provide a blueprint for preservation organizations today.