The year 2014 marks the 175th anniversary of VMI’s founding on a snowy day in 1839. Today’s Corps of Cadets, more than 1,600 strong, has its roots in a quiet ceremony that year on Nov. 11, when 23 cadets relieved guards at what was then a state arsenal. 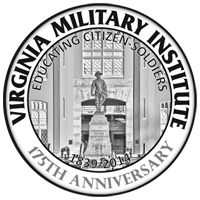 By 1864, the year the entire Corps of Cadets played a decisive role in the Battle of New Market, the VMI post had begun to look something like it does today, with a barracks building in place that would look much the same when rebuilt following the burning of the post by Gen. David Hunter’s troops a month later. We would recognize that building as Old Barracks.

There is much else that we would recognize, including an abiding belief in founding superintendent Francis H. Smith’s ideal of the citizen-soldier. The ever-present need for leaders of knowledge and integrity in the civilian and military sectors has been the driving force throughout the Institute’s history.