VMI and the Battle

Civil War Record: Assistant Adjutant General at Camp Lee in Spring of 1861; Appointed Major of 21st Va. Infantry in June, 1861; Detailed to VMI Jan. 20, 1862; Commandant of Cadets 1862-64; Unofficial sources says he served as Private in the 4th Va. Cavalry during the summer of 1863 while on leave from VMI; New Market Staff - Commanded Cadet Battalion at the Battle of New Market May 15, 1864, where he was slightly wounded in action (took a small piece of shell in the face); served with the Cadets in the trenches at Richmond until the Corps disbanded in 1865.

Careers: Teacher, School official; Unofficial source says he worked as a railroader before teaching at VMI; Lieut. and Asst. Prof. of Math and Latin and Asst. Instructor of Infantry Tactics at VMI 1859-60; Studied Law before the War; Lt. Col. and Prof. of Military History and Strategy; Instructor of Infantry, Artillery, and Cavalry Tactics and Commandant of Cadets 1862-64; At Washington College 1865-66; Col. and Prof. of Military History and Commandant of Cadets at VMI 1865-90; Brig. Gen. and Superintendent of VMI 1890-1907; On Board of Visitors of both US Military Academy (1890) and US Naval Academy (1894)

Biography & Genealogy: Thomas Garland Jefferson, Class of 1867. "Died on the Field of Honor."

Bev, as he was known to his family, enrolled in the Corps of Cadets at Virginia Military Institute on January 20, 1863.  There he made many friends including John S. Wise, his roommate at the Institute.  Bev (or Jack as he was known at school) and John were left to guard a baggage wagon at the start of the battle.  Not content to wait out the battle in comparative safety, they disobeyed orders and joined the cadets marching to the front.  Both were injured in the battle, and Stanard died on the porch of the Bushong farmhouse, bleeding to death from a leg wound.

No doubt a letter written from this place will take you greatly by surprise.  Well to relieve your anxiety I will tell you before going further and keep you from uneasiness.  On Tuesday night an order came from Gen. Breckinridge calling us immediately to Staunton. . . and are tonight encamped one mile out of town.  I have run the blockade and come in to take tea with Cary Taylor, and that I might write this letter.  Am I not good?…The Yankees are reported coming up the Valley with a force of 9000 strong.  Our Corps will run Gen. B up to 5000 maybe more.  I hope we may be able to lick them out.  I have suffered more with my feet this march (so far) than I ever did on all the others together…Well darling Mother I have written enough I suppose to relieve your mind as to our destination so I must stop and go in the parlor.  Some young ladies there…And now my dear Mother that I may be spared to see you all again, and that you may continue in good health will be the nightly prayer of

Source : The Battle of New Market by Dr. Joseph W. A. Whitehorne

In 1839 the Virginia legislature approved replacing the guard company at the Lexington Arsenal with a military school. The school was intended to provide a source of competent militia officers, engineers, and teachers. It proved to be the states greatest source of officers in 1861; of sixty-four regiments raised that year, twenty-two were commanded by VMI graduates. Of 1,902 VMI matriculates from 1839 to 1865, 1,781 served in the Confederate Army. In April 1861 the Corps of Cadets, 200 strong, performed training duties in Richmond. The school resumed "normal" operations in January 1862 with 269 cadets. The corps was called out as reserve in April and May 1862 during Jackson's McDowell Campaign and took to the field three times in 1863 to support resistance against Federal cavalry raids in southwest Virginia. Following New Market, the corps was ordered to Richmond, where it served briefly in the city's defenses. It returned to Lexington in June to resist Hunter's advance, but could do little to prevent the Federal burning of Institute facilities. The corps was furloughed from July to October, when it was reassembled at Richmond where it served again periodically in the city defenses. It was disbanded on 2 April 1865 on the eve of the evacuation of Richmond. The Institute reopened at Lexington in October 1865.

* Died of typhoid April 1865 with corps at Richmond 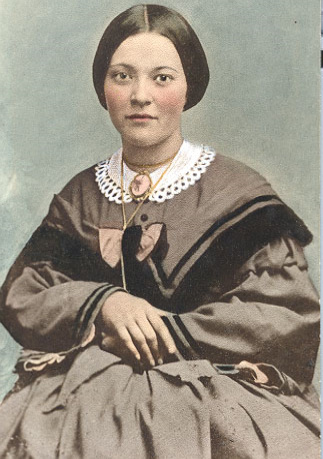 Known to her friends as Lydie: petite, dark-haired Eliza Crim was well known in New Market for her compassion.  After the Battle of New Market, she helped care for the wounded from both sides and even nursed the dying cadet, Thomas G. Jefferson in her own home. After his death she journeyed eighty miles to return his personal effects to his grieving family.  She is said to have made the first Confederate flag for the town as well as introducing the tradition of Christmas trees to New Market homes.  Because of her love and care for the VMI cadets who fought at New Market, (she called them “her boys”) she was awarded the New Market Cross of Honor along with all the cadets involved in the battle; the only woman ever to receive this award.  Upon her death at the age of 93, a squad of cadets carried her flag draped casket and laid her to rest under a tombstone that reads, “Mother of the New Market Corps”.

I want to tell you something about the battle of New Market…How well I can remember it all, and how it frightened my poor old mother and the little children.  They were taken to the cellar for protection. The day of the battle I stood on the doorstep.  My brother called to come and look at the fine soldiers coming down Shirley’s hill.  This was the first time I ever saw the Virginia Military cadets.  They looked so nice and trim as they ran down the hill…I will never forget those brave boy soldiers as they ran down the hill to victory and death…I ran down to the battlefield to help with the wounded.  I was the first woman to go there…They told me of a poor little cadet lying down at the Lightfoot farm, badly wounded.  I told them to bring him up to my home…the now Sir Moses Ezekiel, of Rome, Italy, who was then a pretty black curly-headed Jewish boy, brought him to my home in an ambulance and carried him in…When we laid him down he looked up and said, “Sister, what a good soft bed.”…His name was Thomas Garland Jefferson.  He was about 16 years of age, was blue-eyed and had golden hair.  I will never forget him and his sweet boyish face… He died in Moses Ezekiel’s arms…Sleep on, sleep on, my beautiful soldier boys, who gave your precious young lives for a cause we all believed to be right, and are now resting under the “shade of the trees.”

The Mother of the old war Battalion,

Excerpts from a letter written by Eliza Crim to Mrs. I.V. Johnson in 1909