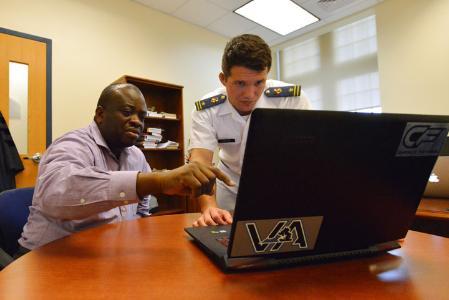 “If I like something, I just make time for it.”

That’s what Robert DuPont ’20 has to say about why he keeps writing computer code—even when there’s no class assignment or academic credit on the line.

Thanks to work they did together over the summer, DuPont and Dr. Ramoni Lasisi, assistant professor of computer and information sciences, recently learned that a paper they co-authored, “Augmenting Stochastic Local Search with Heuristics,” has been accepted for presentation at the 9th IEEE Annual Ubiquitous Computing, Electronics, and Mobile Communication Conference, to be held Nov. 8-10 at Columbia University in New York City. Both DuPont and Lasisi plan to attend the conference, where DuPont will demonstrate simulations of the code he’s written and Lasisi will present the paper.

Another paper that the two wrote together, also over the summer, “Team Exploration of Environments Using Stochastic Local Search,” has been accepted for publication as a book chapter.

Although he’s now only in the fall of his 2nd Class year at VMI, DuPont caught Lasisi’s attention early in his cadetship because of his intense interest in and talent for programming. By his 3rd Class year, DuPont was enrolled in Lasisi’s data structures and algorithms class, one that Lasisi described as “the most challenging programming course” at VMI.

“It was an easy class for him,” said Lasisi.

That was in the fall of 2017. By the time the spring semester rolled around, DuPont had signed up for an independent study with Lasisi—one having to do with the real-world problem of gerrymandering. “Manipulation of District-based Elections: Algorithms and Experiments” is currently under review for publication.

When summer came, DuPont was looking for a new project. He already had an internship having to do with machine learning lined up at West Point, but he was looking for an even bigger challenge. That’s when he decided to keep working with Lasisi on another project, one having to do with using artificial intelligence—Lasisi’s research specialty—to enhance searching capacity through minefields or areas in which an airplane might have crashed.

“Search is a huge problem in computer science, especially in the area of AI, artificial intelligence,” said Lasisi. “We need to find out a systematic way, an intelligent way, of [searching] without wasting time or resources. … We have to devise some systematic way of navigation in that environment so we can get the result on time.”

Attempting to do this, DuPont designed an environment in which large areas are marked off in small squares, like a sheet of graph paper. Each small block of nine squares, a 3x3 area similar to a tic-tac-toe grid, is marked off and defined as a state, while the 3x3 grids nearby are defined as neighborhoods.

Rather than jumping randomly among the states, the agent or seeker in DuPont’s program uses heuristics, which DuPont defined as “exploiting some information about the environment to guide the agent toward the goal.” This, he noted, makes for an orderly and faster search.

Lasisi noted that DuPont’s project carried no academic credit whatsoever—it was undertaken for the joy of learning and nothing else. “He’s been doing something way beyond his mates,” said Lasisi. “This is not homework stuff. We don’t know the solution.”