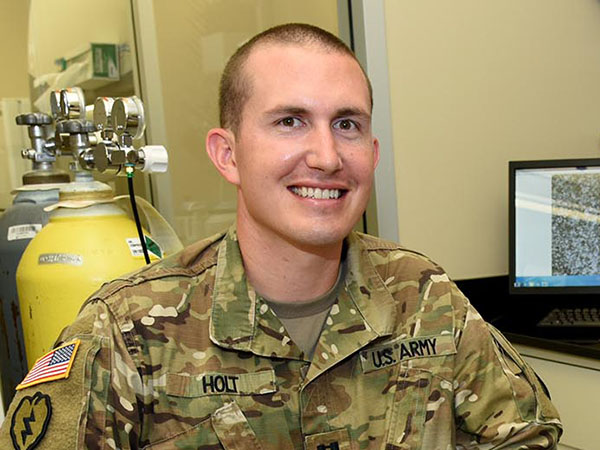 After five years in the U.S. Army, and nearing the end of his term of service, Andrew Holt ’07 knew that he wanted to continue serving in the Army, but not in his current position. His sights were set on his passion – scientific research.

Through a former VMI mentor, he learned about the Army’s biochemist/physiologist program and began work on his credentials which included a doctorate in physiology from the Brody School of Medicine at East Carolina University and a fellowship at the U.S. Army Institute of Surgical Research.

“It has been great, and I love it!” he said.
He was recently assigned as deputy director for the Department of Sensory Trauma the U.S. Army Institute of Surgical Research. Holt’s research is dedicated to developing successful treatment strategies to restore vision for service members who suffer from optic nerve injuries.

He stated that there are some similarities between his two Army jobs, but for the most part, they are night and day.

“The similarities are that you work with and take care of soldiers,” said Holt. “You also have to maintain physical fitness and readiness, set the example and meet the commander’s intent, but as an artillery officer, you train to deploy and be ready for war. Here, all of that still applies, but now we are focused on our mission of ‘optimizing combat casualty care’ and delivering solutions and products for the combat wounded.”