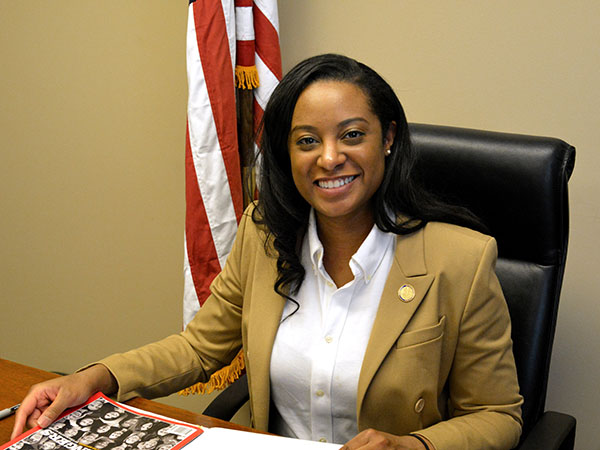 Jennifer Carroll Foy '03 was elected as the 2nd district representative in the Virginia House of Delegates. – VMI Photos by Ashlie Walter.

Jennifer Carroll Foy ’03 was in a JROTC class at Petersburg High School when the U.S. Supreme Court ruled women were allowed to attend Virginia Military Institute in 1996. She remembered the essence of Judge Ruth Bader Ginsburg’s speech is that women should have the same opportunities as men.

“At that moment, I stood up, and I said ‘that’s right. I can go to VMI; I can do anything my male counterparts can do.’” she said.

Her views were challenged by a classmate who believed women should stay at home. The classmate changed his choice of college from West Point Academy to VMI to watch Foy “fail.” He bet her a dollar she wouldn’t graduate.

“I went with two other males from Petersburg … and I was the only one who graduated,” Foy said.

She added she is still friends with that classmate and he still owes her that dollar. After graduating from VMI in 2003, she went on to attend law school, become a magistrate judge and public defender. More recently, she was elected to be the second district representative in the Virginia House of Delegates in Nov. 2017 and started her work in the General Assembly.

The skills that allowed her to adapt to being a democratic politician are rooted in her education at VMI.

“I always say it's not a great place to be but a great place to be from,” she said. “VMI teaches how to lead from the front and be the change you want to see. I saw a decline in civility in conversations. I thought I could add to that and bring skills I learned as a cadet.”