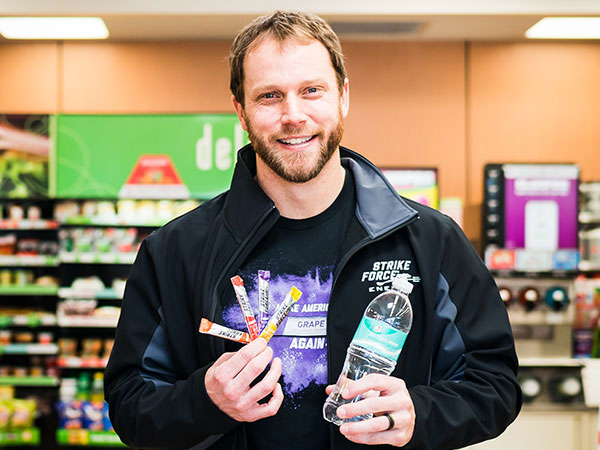 After serving in the Navy for 10 years, Sean Matson founded two businesses - an energy supplement company and designing equipment for soldiers. –Photography by Jennifer Carr Photography.

Coffee in the morning is an everyday routine for many Americans, but Sean Matson ’05, a former Navy SEAL, is looking to change up that routine with his special energy supplement.

Matson was a platoon commander for the Navy SEALs for almost 10 years before transitioning to entrepreneurship. He founded MATBOCK, a small business that designs lighter, more practical equipment for soldiers, in 2010 and spun that into creating the energy supplement company Strike Force Beverage sold in 7/11 convenience stores all across the nation.

“When you look at Coca-Cola, Pepsi, Gatorade, Red Bull, Monster or anything else, you’re talking about 16-ounce cans with only about 6 milliliters of chemistry in it – everything else is just water. Anybody in logistics knows it’s not very profitable to ship water, so we looked at our product and said, ‘Let’s make a healthier alternative [energy supplement] for consumers that allows them to create their own.’ You know, millennials love the ability to create their own,” he said.

Another way Strike Force invests in their consumers is philanthropy. Each week, after pulling from a running list of Army Post Office addresses provided to them from community members, the company picks a recipient to send a care package to. Each box is created with the soldier in mind – things that they need, want and will enjoy.

“I would say that I’ve always had that feeling and appreciation for giving back because of how I was raised, and I would venture to say that most people who go to VMI probably feel the same way,” Matson stated.