How many VMI Alumni fought in the Civil War?
The latest research indicates that of the approximately 1,930 alumni who were living at the beginning of the Civil War, 1,827 served in some capacity (94.7%). Of those, 240 died (171 killed or mortally wounded in action, the rest from disease or other causes while in service). Approximately 19 fought for the Union - see this article Civil War Alumni in Union forces. 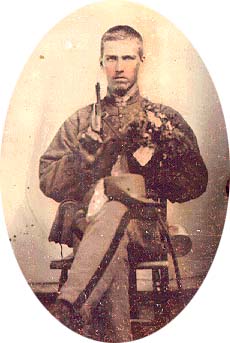 How old was the typical Civil War era cadet?

Although the ages ranged from 15 - 25, most cadets were between 17 and 21, that is, very similar in age to today's college students.

Which VMI alumni became Generals in the Confederate Army?
See our list, with biographical information about each individual.

What was cadet life like during the war?
See these online collections of cadet letters and diaries.

How can I find out if my ancestor was a cadet during the Civil War?
Search our Online Rosters Database

Did VMI's historical records survive the burning of the Institute in 1864?
Although Barracks and other buildings were badly damaged during Hunter's Raid, all important institutional records survived. Thus, VMI's Archives are remarkably complete for all eras, with no significant gaps.

Do you have military records for soldiers who did not attend VMI?
No. However, we are sometimes able to provide information about relevant resources available elsewhere.