When and where was Jackson born?
Thomas Jonathan Jackson was born on January 21, 1824, in Clarksburg, Virginia (now West Virginia) to Julia Neale Jackson and Jonathan Jackson. 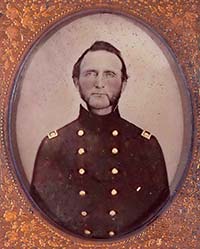 How did Jackson earn his nickname, “Stonewall”?
Jackson’s nickname was first applied to him at the First Battle of Manassas on July 21, 1861, by Confederate General Bernard Bee. Inspired by Jackson’s resolve in the face of the enemy, Bee called out to his men to inspire them: “Look, men! There is Jackson standing like a stone wall! Let us determine to die here, and we will conquer!” Exactly what General Bee said will never be known, but this version was published in the Charleston Mercury on July 25, 1861, and reprinted in the Richmond Daily Dispatch and Lexington Gazette.

Another popular version of General Bee’s exclamation is “Look at Jackson’s brigade standing like a stone wall! Rally on the Virginians!” This version appeared in several publications put out in the twenty-five years after the war. Yet another version of the quote was later put forward by Jackson’s surgeon, Hunter McGuire, in 1891: “There stands Jackson like a stone wall! Rally behind the Virginians!”

Did he have any children?
Jackson’s first wife, Elinor Junkin Jackson, died as a result of giving birth to a stillborn son. Jackson and his second wife Mary Anna Jackson had a daughter, Mary Graham Jackson, who was born and lived for a few weeks in 1858. Mary Anna gave birth to another daughter, Julia Jackson, in late 1862. Julia survived to adulthood and had two children of her own before she passed away. There are numerous Jackson descendants today, although none of them has the last name, Jackson.

How did Jackson die?
Jackson was accidentally wounded by friendly fire at Chancellorsville on May 2, 1863, by a soldier or soldiers of the 18th North Carolina Infantry Regiment. Jackson was shot twice in the left arm and once through the right hand. His left arm was removed two inches below his shoulder by Dr. Hunter McGuire in an effort to save his life. Jackson was then removed to Guiney Station to convalesce. Jackson’s condition continued to decline; he developed pneumonia and died on May 10, 1863. His last words were “Let us cross over the river and rest under the shade of the trees.” Jackson was buried on May 15, 1863, in the Lexington Presbyterian Cemetery. The cemetery, now called the Stonewall Jackson Memorial Cemetery, is located on Main Street in Lexington, Virginia.

What happened to the Washington Street house after Jackson died?
After Jackson left Lexington to fight for the Confederacy, Mary Anna left Virginia to live with her parents in North Carolina. She chose to remain at her parents’ home after Jackson died. Mary Anna then rented the house out for a period before selling it to a chapter of the United Daughters of the Confederacy in the early 20th century. For nearly fifty years, the house—with many additions—served as the only hospital for Rockbridge County. When the hospital moved to its current location, the house was operated as a shrine to Jackson. In 1979, the house was restored to its appearance during the period of Jackson occupancy and reopened to the public.

What happened to Jackson’s amputated arm?
The Reverend Beverly Tucker Lacy carried Jackson’s arm to Ellwood, Lacy’s brother’s plantation home. Ellwood was located about one mile from the field hospital where Jackson was treated. The arm was buried in the family cemetery. The site is currently operated by the National Park Service.

What happened to Jackson’s wife?
Mary Anna Jackson never remarried. After Jackson’s death, she and Julia returned to her “Cottage Home,” her parents’ home in Lincoln County, North Carolina, where they stayed until 1873. Mary Anna and Julia then moved to Charlotte for six years and subsequently spent two years in Baltimore while Julia attended school. After Julia completed her formal education, the two women generally spent winters in Richmond and summers visiting Lexington, though they never stayed in the Washington Street house. When Julia married, Mary Anna joined her household, first in Richmond and then for a brief period in San Diego before returning to North Carolina. Mary Anna lived the rest of her life in Charlotte, although she frequently traveled to visit friends and family, and to attend Confederate Veterans’ events. Mary Anna died in 1915 and is buried in Stonewall Jackson Memorial Cemetery.

How did Jackson feel about slavery?
Jackson did not leave behind any writings indicating how he felt about the institution of slavery, so we don’t know for certain how he felt about it. We do know that he participated in the slave economy. Jackson owned six individuals while he lived in the Washington Street House. Albert had requested that Jackson purchase him and was hired out a local hotel, Rockbridge Alum Springs, and Virginia Military Institute as a waiter. Amy, who served as a cook, had requested that Jackson purchase her at a public auction. After his marriage to Mary Anna, the couple received Hetty, Mary Anna’s former nursemaid, and Hetty’s two teenage sons Cyrus and George, from Mary Anna’s father as a wedding gift. Jackson purchased the sixth slave, a small child named Emma, as a gift for his wife. Mary Anna may have also brought two or three more slaves to the marriage who were sold and never lived in the Washington Street house.