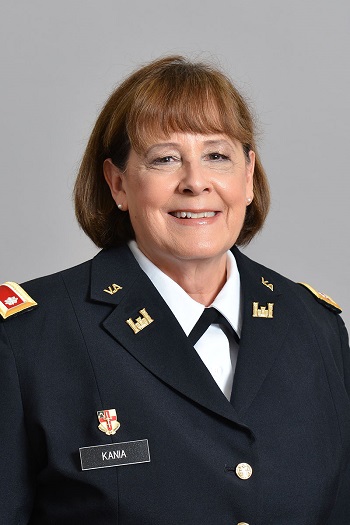 LEXINGTON, Va., August 3, 2020—Little did Lt. Col. Eleanor “Ellie” Kania know when she graduated from California State University, Sacramento with a bachelor’s degree in business administration that life would take her across the country to Virginia—and then land her as director of human resources at Virginia Military Institute on the eve of the global coronavirus pandemic.

Kania, who came to work at VMI in the late summer of 2016, was named interim director of human resources in early March after Lt. Col. Richard “Rich” Parella left for an opportunity elsewhere. In mid-July, she was promoted to her current rank and named director.

Taking the job of interim director might have seemed like a normal progression—but within days of Kania accepting the job, life at VMI and around the globe became anything but normal. Cadets were sent home in March for what would become their longest absence from post since the Civil War, and most employees capable of doing so were asked to work from home.

The onset of the pandemic was accompanied by a barrage of state and federal regulations for emergency leave. “I didn’t have much time to think about it,” recalled Kania. “It just got real busy, real quick.”

Working nearly around the clock, Kania and her three-person staff had to interpret and apply not only the state’s public health emergency leave, but also the federal government’s Families First Coronavirus Response Act, which provides both paid emergency sick leave and expanded family medical leave to employees caring for children whose schools have closed in response to the pandemic.

It was no small task, as VMI has nearly 800 employees, each with a unique configuration of job and family responsibilities.

“We had two different leave systems that hit us kind of at the same time, and we had to make sure that we were administering them properly,” Kania explained.

Brig. Gen. Dallas B. Clark ’99, deputy superintendent for finance, administration, and support, noted that the new rules didn’t come with much of a playbook for implementation, nor did they consider secondary effects.

Having a steady hand on the tiller is always good, of course—but according to Kania, it’s vital when you work in human resources. She’d be the first to acknowledge that in her line of work, a carefully planned-out day isn’t likely to stay that way.

With its emphasis on social distancing, the pandemic has also challenged Kania’s ability to implement the kind of people-first philosophy she believes in. Before the pandemic hit, VMI’s human resources office saw a good deal of foot traffic, and Kania’s door was always open. Even before many VMI employees began working from home in mid-March, the office had to close to walk-in visitors to protect employees.

“Shutting our doors has been a big challenge because that’s not how we want our department to be,” said Kania. “We don’t want people to think we’re inaccessible.”

Currently, Kania and her staff are strategizing as to how to both welcome new employees and offer retirement counseling in a socially distanced fashion.

“The human part of it, the interactions we’re accustomed to doing face to face, will be difficult for us,” she acknowledged.

People skills, Clark noted, are one of Kania’s great strengths. “She listens, and she understands,” he commented. “She lends a great value to our employees and retirees.”

“After I got my MBA, VMI was the first place that contacted me and was interested in me,” Kania remembered.

Once on the job, Kania found her footing quickly. “[Human resources] is something I’ve discovered,” she noted. “I just have a natural affinity for it and ability to deal with the multiple duties and people issues that come through that office.”

It’s often a reactive job, no matter how proactive a human resources professional might want to be.

“I have to put out a lot of fires, but I have a lot of help,” said Kania. “Gen. Clark and I work very closely together. He’s all in. He’s put in a lot of his time, and he’s been a big help. I consider him a mentor to me.”

Going forward, Kania knows she and her staff need to be prepared for just about anything.

“Because of the uncertain nature of the pandemic, I’m not really sure what challenges we’ll be facing, but I’m really proud of what we’ve done at VMI to keep our employees informed, to keep things running,” she stated.

Away from work, Kania keeps up with her family, now consisting of three grown children and three grandchildren, with a fourth grandchild expected in late January, and she’s an avid reader.

But even as the pandemic presses her personal life to the sidelines, Kania is grateful to all of those who’ve supported her throughout a very tumultuous 2020, especially her hardworking staff. On the home front, there’s her husband of 28 years, Gerry Kania, who has taken over the household responsibilities so his wife can focus on her job.

“Without his support, I wouldn’t have been able to work the hours I’ve had to work and do the things I’ve had to do,” Ellie Kania commented.

Not surprisingly, Kania is also grateful for her fellow employees who’ve persevered through the pandemic’s uncertainty with grit and grace. “This hasn’t been easy,” she stated. “I’ve had many conversations with employees this has been difficult for. I’m really proud of their spirit to keep moving forward and doing their jobs.”