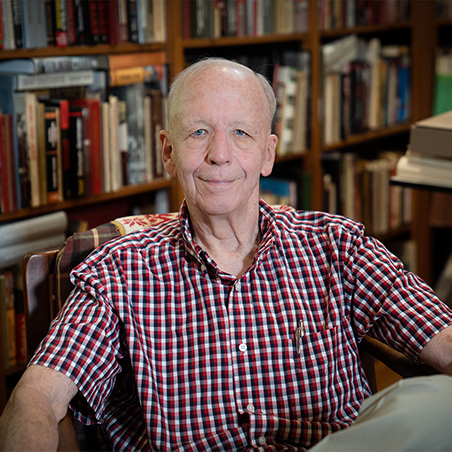 One of the most generous literary prizes in the world, the Pritzker Literature Award—which includes a gold medallion, citation, and $100,000 honorarium—recognizes and honors the contributions of a living author for a body of work dedicated to enriching the understanding of military history and affairs. Author or co-author of more than 60 publications, Glantz is recognized as a leading expert on the Eastern Front during World War II and the role of the Soviet Union during the conflict.

"I accept this award with genuine humility and heartfelt joy. To be awarded for doing what you have loved doing for more than 40 years is an honor indeed,” stated Glantz.

After earning a degree in history from VMI and graduating as a distinguished military graduate, Glantz commissioned into the U.S. Army as an artillery officer, beginning a military career that would last for more than 30 years. He also earned a master’s degree in modern European history from the University of North Carolina at Chapel Hill in 1965. In the past decade, he has returned to speak at VMI and also mentored a cadet interested in military history.

Glantz is a dedicated author and scholar whose work highlights the military history of the Soviet Union and the Red Army in World War II. His books include When Titans Clashed: How the Red Army Stopped Hitler, a book that has become the standard reference book for non-specialists; Armageddon in Stalingrad; The Battle of Kursk; Operation Barbarossa: Hitler's Invasion Of Russia 1941; and others.

Glantz founded and was editor of the Journal of Soviet (Slavic in 1989) Military Studies in 1988, a position he held until January 2018.  He is a member of the Academy of Natural Sciences of the Russian Federation and a 2015 recipient of the Russian Federation Ministry of Defense's medal "For the Strengthening of Military Cooperation.” In 2000 he received the Society for Military History’s Samuel Eliot Morison Prize for his work in the field of Soviet military history.

Glantz is a recipient of numerous military awards including the Distinguished Service Medal, the Legion of Merit, two Bronze Stars medals, two Meritorious Service medals, and many others.

To learn more about the award or the selection process, or to watch Dr. Rob Havers the announce Colonel David Glantz as this year’s winner, visit pritzkermilitary.org.