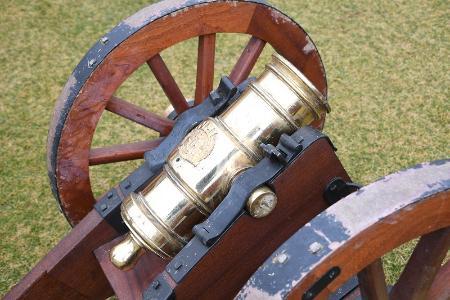 Steen Cannons, a Kentucky company that specializes in the restoration of antique artillery, created a new, solid mahogany carriage for the cannon. - VMI photo by H. Lockwood McLaughlin

LEXINGTON, Va., Mar. 30, 2021—With the return of the Keydet football team to Alumni Memorial Field at Foster Stadium this spring came the return of a small but mighty piece of artillery well known to generations of football fans: Little John II.

The cannon, which is traditionally fired whenever the Keydets score a touchdown at a home football game, was recently placed on a new, solid mahogany carriage by Steen Cannons. The Ashland, Ky., company specializes in the restoration of antique artillery and has done work for VMI in the past. Examples of the company’s work on post include the aluminum carriages on which the Cadet Battery now sit and the Parrott rifle and limber located at the entrance to North Post.

A celebratory cannon has been a part of the VMI football scene since 1957, when the Keydets went 9-0-1 under legendary coach John McKenna. Col. Keith Gibson ’77, director of the VMI Museum System, explained that the team’s many victories under McKenna prompted the cheerleaders of that era to come up with the idea of a cannon.

‘“Little John’ was built by the VMI Physical Plant with, apparently, whatever scrap metal was lying around,” Gibson wrote in an email. The cannon was only used one season before safety concerns forced its retirement.

The next year, though, brought Little John II, which was designed by Col. Cary S. Tucker, who taught electrical engineering and had a deep knowledge of historical artillery. At the time, Tucker had a personal connection to the corps as well, as his son, Spencer Tucker ’59, was a cadet. The younger Tucker, now retired, would go on to become a member of the VMI faculty, teaching in the history department for many years.

A local business assisted with manufacturing the new artillery piece. The Buena Vista Foundry created the brass tube of Little John II out of 100 brass 75 mm shell casings. It is a 3/5ths scale replica of a 1750 British howitzer.

Tucker also designed the original wooden carriage in 1958, which was made in the woodworking shops at the Lorton Reformatory in Northern Virginia. At that time, Gibson noted, Lorton Reformatory was making a number of cannon carriages for Civil War sites in preparation for the Civil War centennial.

By the time the second decade of the 21st century was nearing its close, though, the 63-year-old carriage was showing signs of age, and it was time for a replacement. In January 2020, Little John II was sent off to Kentucky for restoration. The new carriage arrived at VMI in August.

“We have Col. Tucker’s original shop drawings for the carriage, and the drawings were used by Steen Cannons to assure an exact reproduction,” Gibson explained. “While the original carriage may have been repaired once or twice by the VMI Physical Plant shop, the recent rebuild is the first replacement of the entire carriage. All of the original metal parts were used in assembling the new carriage.”

The arrival of the new carriage had been timed with the fall football season in mind. The Southern Conference, though, postponed the season until the spring due to the coronavirus pandemic.

LEFT: A photo of the cannon being fired at a 1958 football game , courtesy of Col. Keith Gibson. RIGHT: VMI cadets  fire Little John II after a touchdown against Furman Feb. 27 in Foster Stadium (VMI photo by H. Lockwood McLaughlin).

The exceptionally strong start to the season, with the Keydets off to a 4-0 start for the first time since 1981, has meant busy Saturdays for the Little John II Cadet Crew. And it’s not just cadets doing the firing: during the March 13 game against Mercer University, a 41-14 victory, Maj. Gen. Cedric Wins ’85, interim superintendent, took a turn firing the cannon at the end of the game.

The Keydets have two home games left in the season: an April 3 matchup against East Tennessee State University and a much-anticipated game against the Citadel April 17, in which VMI will attempt to retain the Silver Shako, which returned to Lexington in 2019 after a 17-year absence.