Deputy Superintendent for Finance and Support

Dallas Clark matriculated from Salt Lake City, Utah, with the Class of 1999. 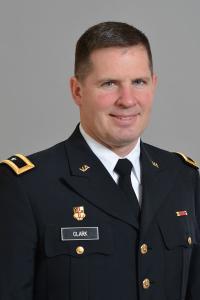 Dallas was an Economics and Business major at VMI and received an MBA from Virginia Commonwealth University. Originally, he worked in the private industry before returning to VMI to work in the VMI Alumni Association, where he was responsible for new cadet recruiting, chapter promotions, and alumni placement.  In 2006, he joined VMI in the business office as the Institute planning officer.

In that role, he was responsible for the Institute Strategic Plan, facilities master planning, emergency preparedness, and a series of other responsibilities before he was named the associate deputy superintendent for finance, administration, and support.

After his appointment as vice president and chief advancement officer at Southern Virginia University, he returned to VMI as the director of finance, administration, and support and began his duties on February 2017.  He oversees a broad spectrum of offices including the treasurer, comptroller, auxiliary services, planning, physical plant, human resources, infirmary, counseling, police, museum system, post engineer, and construction.

He graduated from both the College Business Managers Institute and the Next Generation Chief Business Officers courses from the University of Kentucky.