In an air-minded world, Air ROTC has a definite niche. This niche is in the institutions of higher learning in our country, where it will increase the interest of scientific minds in aeronautics and serve to maintain our nation’s leadership in this highly important field

On 10 Aug 1946, Brig Gen A.C. Kincaid, Chief of Staff, USA, notified VMI that the institution had been favorably considered by the Air Force (not yet officially a separate branch of the military) for an Air ROTC unit. The War Department had approved plans to train some 16,200 students in Air Reserve Officer Training Corps units at 99 universities and colleges beginning that fall. An additional 49 institutions were invited to join the program in the fall of 1947. The institute made a request for the Air Unit to the Commanding General, Air Training Command, Barksdale Field, LA. The unit would be under the supervision of the Air Training Command Liaison Office, Area III, Middletown, PA.

The then Superintendent of VMI, Major General Richard J. Marshall, USA, applied to stand up the Air component of ROTC at VMI on 20 August, 1946. They were required to maintain 100 cadets in the program. Col J.F. Reed, Chief of Training Liaison Office, Olmstead Field, Middletown, PA said the Air Corps would nominate Lt Col Skidmore Neale Garrett, VMI c/o ’32, to be the first Professor of Air Science and Tactics (PAS&T), (now known as the Professor of Aerospace Studies (PAS)). Lt Col Garrett was on a leave of absence and was recalled from leave and ordered to report without delay because his services were badly needed. Initially, the Air unit was organized from cadets in all classes except the first class (senior). One officer and three enlisted men reported for duty to run the unit with two additional officers added later.

On 9 Sept 1946, the Air ROTC unit was officially established at VMI with a tentative enrollment of 96 elementary cadets and 4 advanced cadets. It is believed that this unit is the first one organized and established in any college in the United States. Approximately 80 schools activated units in September of that year. Some of the reasons for the small number of advanced students was the depletion of Junior classmen and elimination of Advanced ROTC courses during the war years.

Lt Col Garrett promptly created an Air Reserve Training Program, utilizing 7 cadets, with training conducted at Richmond Army Air Base, Richmond, VA. Cadets were authorized to be absent from the Institute not more than two weekends per month.

The Space Force was created under the Department of the Air Force on 20 Dec, 2019. 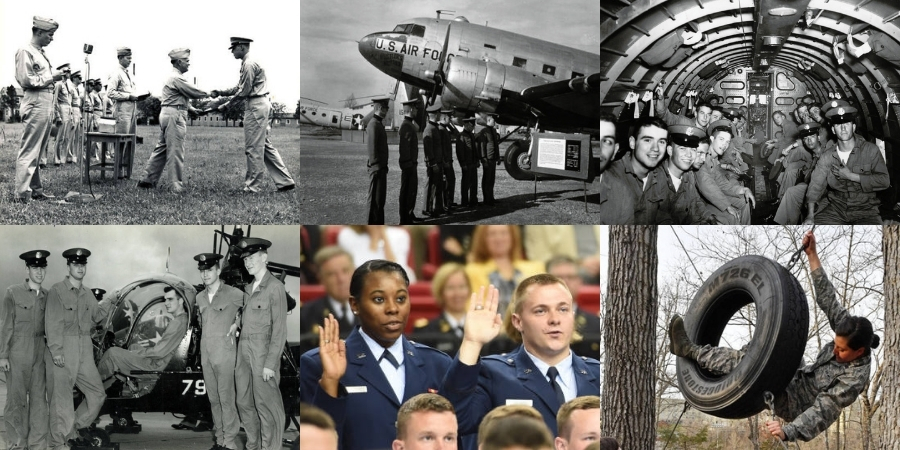