Army ROTC at VMI has always produced graduates that are "citizenry trained and accustomed to arms." This time-honored tradition, the cornerstone of ROTC, has enabled the US Army to call upon thousands of soldiers - to lead - and fight. 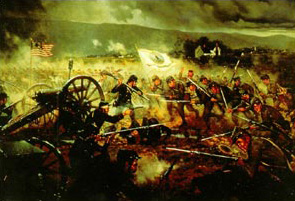 Army ROTC at VMI is the same today; cadets are selected for Active Duty tours of service in the US Army Reserve and the National Guard.

Since its founding in 1839, VMI has required all cadets to study military science and tactics. "By 1881, VMI had produced over twelve hundred graduates, and two hundred fifty-nine former cadets were killed in battle." Most, of course, were slain during the Civil War, beginning with three men killed at Manassas. In 1891, the Board of Visitors succeeded in having Lieutenant John S. Parke detailed by the Army as a Professor of Military Science and Tactics. With one exception, the position of Professor of Military Science and tactics has historically been filled by graduates of VMI.

War clouds appeared over Europe in 1914, and the storm eventually involved a reluctant United States in the conflict. Army officers at VMI once again began the task of preparing young men to lead in combat. A camp for military training was established on the VMI post. On 22 December 1916, the Superintendent officially notified all cadets of the recently passed Officers Reserve Act. This act, an integral part of the June 1916 National Defense Act, established Army ROTC and the three branches at VMI, Cavalry, Field Artillery, and Infantry. The Board of Visitors also included an Engineer Branch. All cadets were automatically assigned to the Infantry and those desiring to enter other branches took special examinations.

By the year 1924, sufficient military equipment and supplies had been received that allowed the Corps of Cadets to form an infantry battalion, a cavalry troop, and a field artillery battery. In May 1943, the Army ROTC Department considerably revamped the curriculum and branch immaterial instruction replaced the three combat arms branches.

World War II found the US Army ROTC Department once again preparing cadets for military service in a terrible and bloody conflict. On 1 November 1945, Artillery, Infantry, and Cavalry Branches were reinstated followed by an Army Air Corps ROTC option in 1946.

Beginning in 1970, a flexible curriculum was allowed in response to changing educational concepts and philosophies. This new program delegated maximum authority to the Professor of Military Science (PMS). Broad guidance and policies were furnished. The PMS programmed the detailed courses of instruction to design a program compatible with the continually evolving environment of the academic community.

The proud and long history of VMI Army ROTC culminated the formation of the Marshall-New Market Battalion in September of 1989. Combining the name of VMI's most honored Army ROTC graduate with its most famous battle is indicative of the dignity, pride, and professionalism felt by each cadet as they train to be future leaders.

The Marshall-New Market Battalion opened its doors in 1995 to a partnership program with Mary Baldwin College that included the Virginia Women's Institute for Leadership. This led to an expansion of the VMI ROTC program to include Washington and Lee University as well as Southern Virginia University. Today the battalion stands ready to produce the future leaders of tomorrow's Army.