Mohamed Azab is an assistant professor in the computer and information sciences department.

Mohamed received his doctorate in computer engineering in 2013 from The Bradley Department of Electrical and Computer Engineering at Virginia Tech, USA.

His research interests lie in the area of cybersecurity and trustworthy engineering ranging from theory to design and implementation. His recent research crosscuts the areas of Software Defined Networking (SDN) architectures and protocols, high performance and cloud computing, ubiquitous Internet of Things (IoT), and Cyber-Physical Systems (CPS).

Mohamed is the founder of the Cyber Security and IoT lab hosting Mohamed’s Ph.D. and Masters students' research activities.

Mohamed acted as a keynote speaker in multiple prestigious conferences. He served on multiple conference and workshop program and steering committees.

Imran Ghani is an Associate Professor of Software Engineering at VMI. He received his Ph.D. from Kookmin University (South Korea) in 2010, M.S Computer Science from UTM (Malaysia) in 2007, and Master of Information Technology Degree from UAAR (Pakistan) in 2002. Dr. Ghani has more than 5 years of inductrial experience. He has a great deal of experience in Agile software development frameworks, models and processes including Scrum, Kanban, Lean, XP and hybrid models and processes. He worked in several software houses focusing on web development, databases, requirements engineering, and software testing. In 2019, he published a textbook, "Introduction to PHP Web Services: PHP, Javascript, MySQL, SOAP, RESTful, JSON, XML, WSDL" which is curretly available on Amazon.com. Dr. Ghani is an active researcher with over 120+ publications in peer-reviewed quality journals and conference proceedings. His research interests include agile software development, secure software engineering, and semantic web.

Mr. David Jones is the Cyber Security Scientist for the Cyber defense Lab. He holds a bachelor’s in business administration –information systems from California State University, Fresno and is pursuing a Master of Science Cybersecurity from Webster University. Mr. Jones has fourteen years of Healthcare critical infrastructure and 2 years of banking critical infrastructure information security experience. From 2018 to 2021 he served as the Director of information technology at Southern Virginia University. From 2013 to 2018 he ran his own software company specializing in 3D Mine Ventilation and Fire simulation software and web-based analytic dashboards for Fresno and Madera Unified School Districts Major Youna Jung is an Associate Professor of Computer and Information Sciences at Virginia Military Institute. She received her Ph.D. degree from Ajou University in South Korea in 2007 and then worked at the University of Pittsburgh and the University of Florida as a research faculty. Her research interests include multiagent systems, context/situation-aware computing, collaborative computing, disaster computing, health informatics, access control, privacy, cybersecurity, and so on.

Lt. Col. Tom Panko is Head of Technical Services in Preston Library and an Adjunct Professor of Computer and Information Sciences at the Virginia Military Institute.  He earned a BSBA with an emphasis in Management Information Systems and an MBA from the University of Southern Mississippi.  Tom has over 20 years of experience in the information services and technology industries.  He has worked in the public and private sectors over the course of his career and his professional responsibilities included work as a technician, installer, operator and administrator of multiple IBM minicomputer systems as well as various microcomputer-based systems.  Lt. Col. Panko has also served as a network administrator on multiple networks and worked as a programmer and systems analyst for many years.

On a personal level, Tom was a proud artilleryman in the USAR and Virginia National Guard.

Jeffrey G. Smith, Jr. is currently Professor of Cyberspace Studies at VMI, where he served four years as the Dean of the Faculty and Deputy Superintendent for Academics.  Smith’s course, the “History of Information Technology (Past, Present, and Future),” examines the origins, evolution, and ethical implications of today’s technological environment.  Smith holds a Masters of Science degree in National Security from the National War College and a Doctoral degree in English Literature from Princeton University.  Smith is a founding member of the Advisory Group for the Army Cyber Institute.

Smith served as the Chief Information Officer (CIO) for all coalition forces in Iraq (2003-2004).  Based on his experiences, Smith wrote “V Corps Battle Command Concept,” a white paper that led to the Army-wide transformation of its tactical communications architecture.  Later, Smith was named the Army’s senior signal officer to Afghanistan to set the network conditions for the Presidential surge (2009/10).  Upon his return, Smith established Europe’s first Army regional cyber center, which combined intelligence, signal, and information operations expertise to account for the expanding cyber threat.

Smith is the author of “A Unified Field Theory for Full Spectrum Operations: Cyberpower and the Cognitive Domain" (National Defense University 2009) and concluded his military career as the Deputy Commanding General of the Army’s Cyber Command. There, he served as the Army’s lead for the “LandCyber” white paper, the Army’s concept for cyber-related transformation. 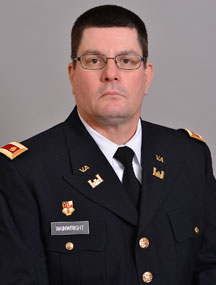 Maj. Doug Wainwright is the CIS Department IT Manager and Instructor. He earned an MDE in Distance Education at University of Maryland University College (UMUC). He came to VMI after 24 years in IT and Cybersecurity providing network engineering services and information security compliance support for DoD, DoJ, and DHS. From 1996 to 2013 Doug worked in support of the Defense Information Systems Agency (DISA) as a System Administrator, and Network Engineer integrating and troubleshooting DoD network encryption equipment in Secret Internet Protocol Router Network (SIPRNET) enclaves.

As a Communications Security (COMSEC) Custodian, he developed training courses and provided instruction in the integration and operation of DoD network encryption equipment to active duty military personnel and government contractors.

Served as VMI Information Security Officer (ISO) from 2014 to 2016. Responsible for the VMI information security operations, maintenance, and compliance with State of Virginia standards.

IT Manager
Computer and Information Sciences