Welcome to the VMI Experience; only the Best.

Your First Year at VMI

Your first year at the Virginia Military Institute is forever. It is a turning point in your life. It is where you transition to your future. It is where the foundation for your success is achieved. Once done, the amount of pride, the great feeling of accomplishment and belonging to something greater than yourself is with you, forever. While other places of higher learning have a similar experience, the Virginia Military Institute outdoes the rest. There is no other place like VMI.

Students from across the world come to VMI. They arrive from different places, backgrounds, and cultures and become VMI cadets. As you sign the matriculation book on Matriculation Day, you have entered the rolls of thousands before you, and thousands yet to come. You have signed up to face academic, military, and athletic challenges, meet them and win.

Rising to these challenges begins on your first day at VMI. From that day forward, you’ll push yourself further than you ever thought you could go. You won't be alone. You and your "brother rats" grow together as a team and depend on each other and the First Class to succeed. The First Class are VMI’s seniors and are your cadet mentors; your “big brothers and sisters”. They guide you in this apprenticeship to become a highly sought after and revered VMI cadet and VMI graduate.

Throughout your first year, you'll learn how to be part of a winning team through discipline, unity, grit, accountability, military conduct, humility, orderliness, and respect for yourself and others. Most importantly, you’ll gain the courage to embody selfless service. Your first year at VMI is tough. It forges you and your brother rats as leaders of character, and it starts with your first week. 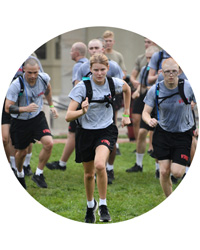 You only go through the Rat Line once, and if you put your all into everything you do, there will be no regrets. VMI will probably be one of the hardest things you ever do, but one of the best decisions of your life.

The VMI regiment is the centerpiece of the Corps of Cadets. The Corps is organized as a rifle regiment consisting of three battalions with three companies per battalion. These are Alpha (A), Bravo (B), Charlie (C), Delta (D), Echo (E), Foxtrot (F), Golf (G), Hotel (H) and India (I) Companies. Additionally, there is Band Company with the VMI Pipes and Drums. You will be assigned to a company throughout your cadetship.

On Matriculation Day, after saying goodbye to your family, you'll form up with your company for the first time. You march into barracks to meet your cadre. These hand-picked, trusted, and experienced upper-class cadets are responsible for your cadet instruction and military training. Their goal is to teach discipline, precision, humility, obeying orders and self-control. Your goal is to learn, become proficient in the military tasks, and earn the status of 4th Class cadet (freshman) by making it through the Rat Line. 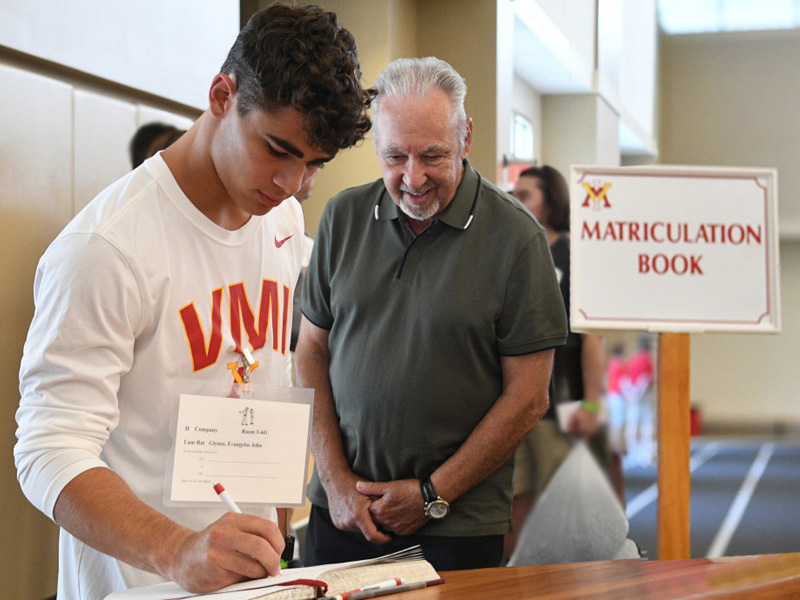 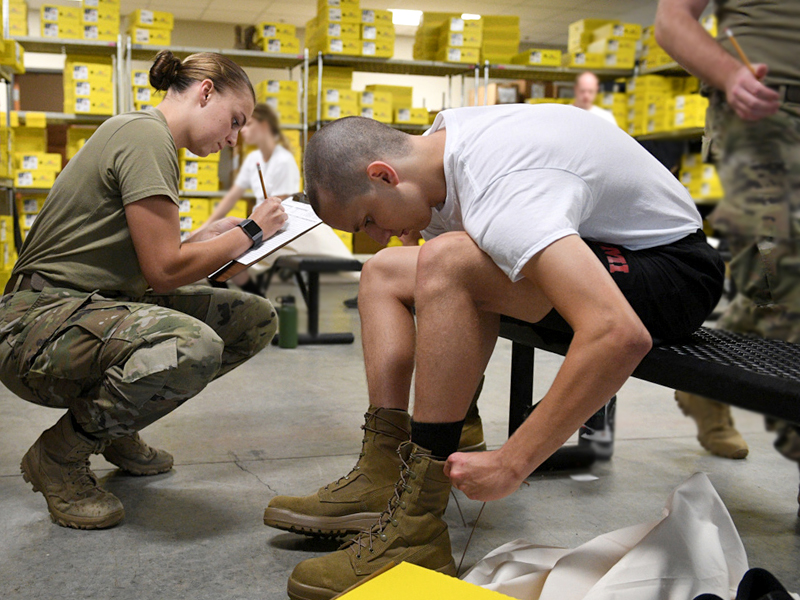 Your first day at VMI is followed by a weeklong “boot-camp”, to break you into the VMI system and learn the basic military and cadet tasks. The cadre is in charge, and this is an intense week of workouts, outfitting and preparation. For hygiene purposes, you'll get your rat haircut, build your physical fitness, learn about the history of VMI, prepare for classes, be fitted for, and issued uniform items, perform training exercises, and become familiar with the requirements of cadet life.

Your first week introduces you to the mental and physical challenges of VMI, and you'll participate in friendly competitions to help you start to form close bonds with your brother rats. Your break-in week concludes with a day long course of physical training activities and the culmination of everything you've learned during your first week. 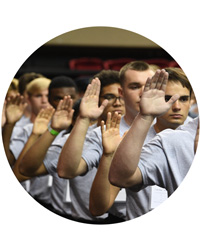 From the day you matriculate, you learn the importance of camaraderie and selflessness, and the brother and sisterhood is something that stays with you long after the Rat Line. One of the few things that’s nice about being a rat is that you will find that you are all treated the same regardless of your past, background, and experiences. 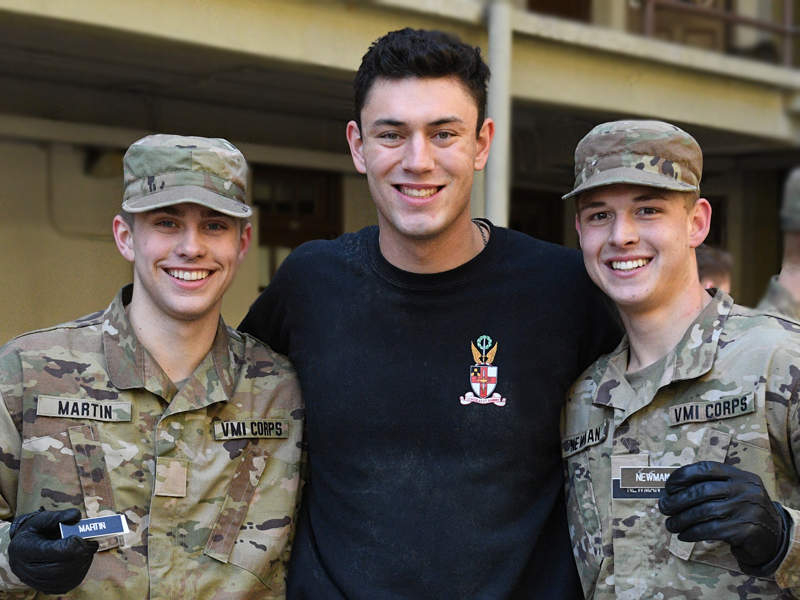 Your greatest ally during and after the Rat Line is your first-class mentor known as your “dyke”. The term dyke is a traditional term at VMI which describes a big brother/sister, little brother/sister relationship where the first-class cadets serve as your mentors offering advice, moral support, and a haven on the first stoop (floor) of the barracks. Friendships resulting from this partnership often last a lifetime. Mentors support one or several rats and act as cadet role models. Your mentor challenges and guides you to achieve goals and helps you understand Corps life. Graduating cadets say it over and over again - what they’ll miss most about VMI is the people and the close friendships. They say it’s like leaving family.

VMI offers one of the most challenging first-year experiences of any college in the United States, and it starts with the Rat Line. The term Rat Line refers to the tradition of new cadets, referred to as rats, walking at rigid attention along a prescribed route whenever they’re inside barracks. The Rat Line’s continuing purpose is to teach discipline, precision, humility, obeying orders and self-control. It’s never-ending atmosphere of tension and strictness teaches the rat necessary, life-long skills of attention to detail, responsiveness, time management and as a result, builds character; these are all essential traits to ready the rat for a successful cadetship. 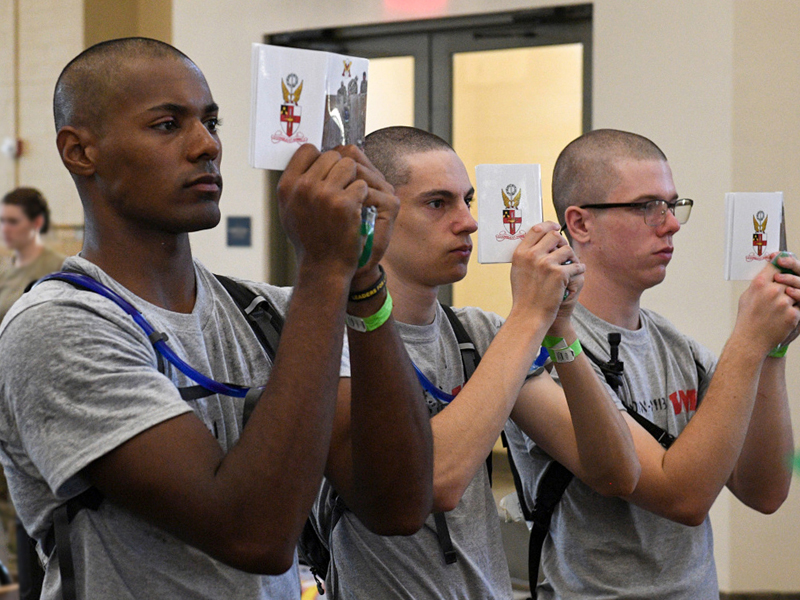 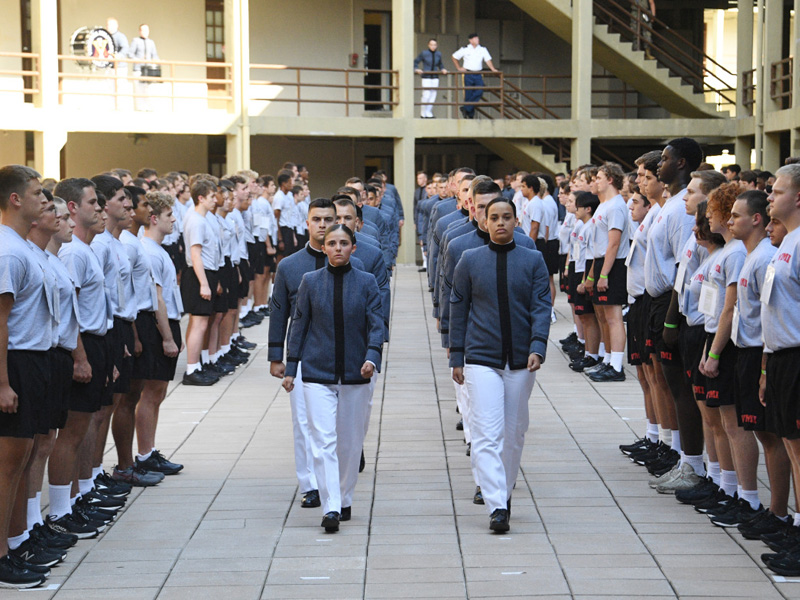 The Rat Line is essentially an extended “boot-camp” which is a point-blank introduction to the basic skills you'll need to succeed at VMI. It all begins on Matriculation Day, runs into your first week of intensified training by the cadre where you “break in” to the VMI system, continues during the Rat Line where you “build up” by squad, platoon/company, rat battalion and finally into a class, and lasts until you earn your cadet status when you “Breakout" of the Rat Line and are recognized by the Old Corps as a 4th Class cadet.

Upper-class or Old Corps cadets may stop and test you at any time of the day or night, so you'll need to be meticulous in your personal grooming and uniform care, and you'll need to be ready to recite school songs, essential elements of the “Rat Bible”, and other information. Be prepared to drop for pushups if you fail these tests, which, like the Rat Line, are designed to build your physical fitness, instill, and reinforce character traits which serve you well during your four years at VMI and throughout your life. Success in the Rat Line requires concentration, attention to detail, a sense of humor, resolve, and self-discipline.

Your cadre instructs you on what to do every minute of every day, at first. You’ll look to your brother rats for support, and you’ll offer your support in return. Your cadre assists you in transforming from a high school student to become a successful cadet. Cadre are hand-picked and well selected from cadets holding rank in each company. They are chosen based on performance and ability to serve as instructors for the newest cadets, called the "rat mass". 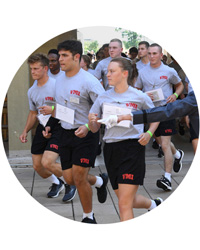 VMI is challenging, demanding, incredibly entertaining, and has been fertile ground for some of the most rewarding days of my life. This place is a microcosm of life. It will rock your world and work every ounce of strength out of your system, but those who know and love you, your 'brother rats', help you through the hard times and into the good.

The Rat Challenge is a 10-week program administered by the physical education department that includes physical fitness and outdoor experiences which stretch you physically and emotionally and enable you to overcome self-imposed limits that you may encounter. The Rat Challenge culminates with the Rat Olympics, held on Founders Day, the anniversary of the Institute’s founding and a day filled with pageantry, athleticism, and gratitude. Activities include tug-of-war, relays, and rock climbing. Your company competes with other companies for the Stockwell Cup, named for the late Colonel Bill Stockwell, and awarded to the company that works the hardest and displays the best attitude. 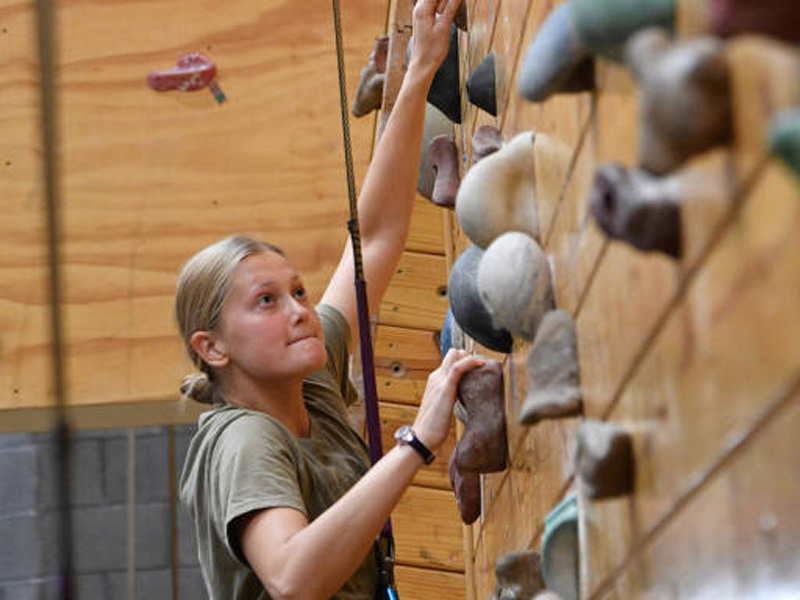 Breakout is your final unifying experience in your rat class and strengthens your commitment to the Corps of Cadets. When breaking out of the Rat Line, you and your brother rats officially become 4th Class cadets. The intensified training cycle starts unannounced and tests you and your fellow brother rats to determine if you have succeeded in your training, demonstrate your resolve, and are ready to join the other great VMI classes which have gone before you. 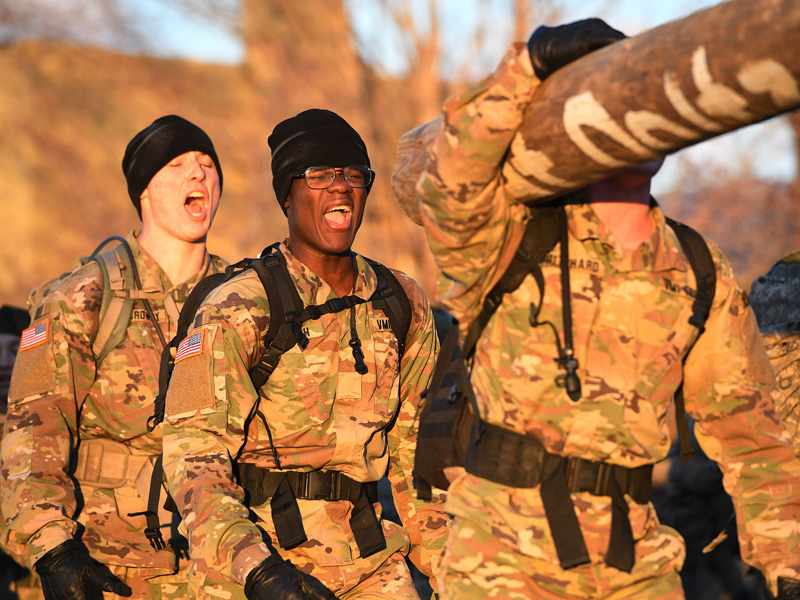 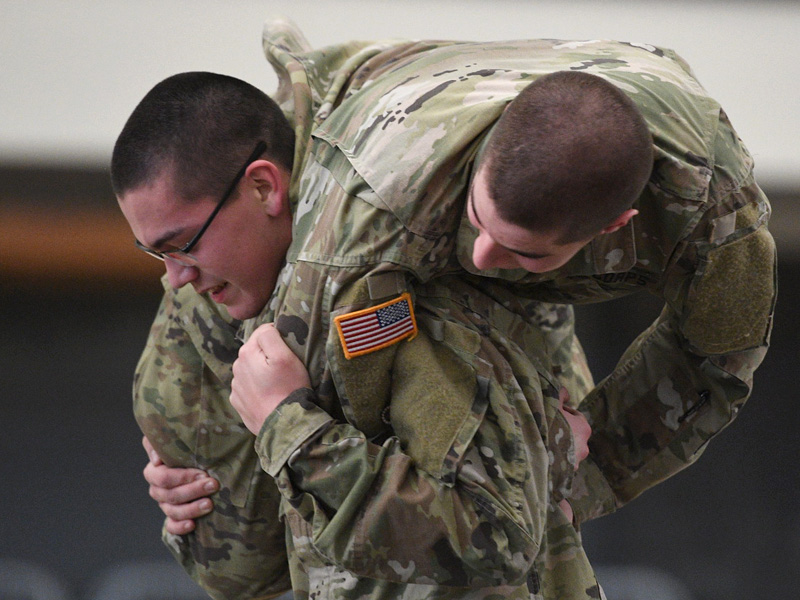 Once you Breakout of the Rat Line, you'll be recognized as a 4th Class cadet (freshman). Now you’ll take on more responsibilities, make even more connections on post and in the community, and you can start earning privileges in the spring semester that come with being a 4th Class cadet, such as electing your officers after spring furlough (leave), attending social events like the Midwinter Formal dance, earning class weekends off post, and other privileges. 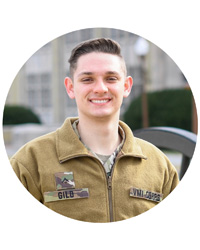 In New Cadet Military Training, there's a decent chunk of time dedicated to emergency medical situations...and those hours of training were just so instrumental in making the difference.

ⓘ  Interested in learning more about VMI Academics, VMI Athletics or more on a Cadetship at VMI? Reach out to our Admissions Team.