Walk into any large bookstore or shop online, and you’ll find resources galore for career advice, some of it helpful, much of it not. Most of the time, such information is meant to help the reader to just get a job.

But Lt. Col. Ammad Sheikh, who’s now in his second year as director of career services, has a different goal: helping all cadets develop a life plan that will sustain them not only economically but mentally and emotionally throughout their working life.

“We’re not just focused on their first destination after college,” said Sheikh. “I want them to look at it as a 40-year marathon of a career.”

With that goal in mind, Sheikh and Maj. Sara Blake, newly hired this year as assistant director of career services, have been hard at work developing a wide variety of programming designed to reach the entire Corps: commissioning, non-commissioning, STEM majors, and non-STEM majors.

According to Sheikh, the first step of career success is for individuals to know themselves, not only in terms of their own strengths and weaknesses but also in the kind of lifestyle they’d like and what kind of organizational culture appeals to them.

“It is my professional opinion that for a 22-year-old with a college degree, getting a job is not the most difficult part,” Sheikh commented. “As Americans, we can find jobs, but there’s a lot of dissatisfaction in employment.”

To help cadets avoid that dissatisfaction, Sheikh and Blake have been working to revamp the career services website, with the goal of making cadets more aware of the possibilities that await them after VMI. In addition, Blake has been overseeing a LinkedIn group designed to help cadets connect with alumni working in fields that interest them, and the career services office has begun encouraging cadets to use Handshake, a job board and networking service specifically for college students.

But of course, the old ways of getting a job still work just as well as the new ones, and rather than dying off in a digital world, the career fair has been reinvigorated at VMI. Once primarily the province of STEM employers and engineering firms in particular, VMI’s twice-a-year Career & Internship Fair now offers a broad mix of employers appealing to cadets of all majors.

During this fall’s event, just under 50 employers came to post, representing industries as disparate as food service, lumber wholesale, and the federal government. “Our goal is to invite employers our cadets wouldn’t have access to otherwise,” said Sheikh. The spring career fair, planned for March, will likewise bring a wide mix of employers to post.

In addition to all of these efforts, Sheikh and Blake have been working to develop programming for specific groups of cadets. NCAA athletes, for example, may not realize that the skills they’ve developed on the playing field will serve them well at work, and members of the Rat Disciplinary Committee and other cadet leadership organizations also have skills that could be listed on a resume. Likewise, cadets planning to commission into the National Guard or Army Reserves could use some guidance in balancing their civilian careers with their military obligations.

Developing a partnership with faculty is also high on Sheikh and Blake’s to-do list. Already, they’ve let faculty know that if they go out of town to a conference, there’s no need to cancel class; rather, the Career Services staff can use that time to give a presentation.

“We want to make sure that every single cadet that graduates from here has a strong sense of their life design,” Sheikh stated.

While many of his brother rats send resumes and anxiously try to plan their post-VMI futures, Jacob Parrish ’20 can focus on his academics as he makes it to the May 16 finish line in his 1st Class year. As for a job 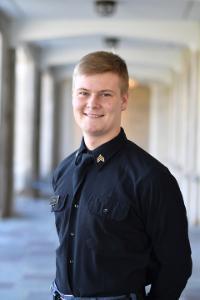 afterward—well, he’s already got one, thanks in part to Lt. Col. Ammad Sheikh in the Office of Career Services.

Parrish, a civil engineering major, will go to work after graduation as an assistant superintendent for KBS, a general contractor, and work under the supervision of Sam Stocks ’90. Prior to being interviewed by KBS, he had had only one job interview in his life, and that was for a job in the dining hall of a senior living facility when he was in high school.

But he knew that to interview for a professional job, “You can’t just wing it like I did in high school,” Parrish explained. That’s where the skills he’d learned in a leadership class taught by Sheikh came in.

Had he not had that leadership class, Parrish noted, he might not have known some of the unwritten rules of a job interview—namely, to show up early, have extra copies of your resume available, and bring a notebook in which you’ve already written questions to ask about the firm that’s hiring.

“[Career services] were great in helping me come up with questions to ask,” said Parrish.

Parrish also sought guidance from Sheikh and Col. Dean Kershaw ’68, an adjunct member of the faculty in the civil engineering department, when he received two job offers at once and needed a few days to wait to hear about salaries and benefits at both.

“Playing that game and how to communicate with a possible future employer—that was probably the biggest help that they gave,” Parrish commented.

In the end, he chose Richmond-based KBS over an opportunity in Roanoke. He even got a signing bonus.

Now, all Parrish has to do is graduate. “It’s definitely a stress relief,” he noted. “I think my parents really like that, too.”