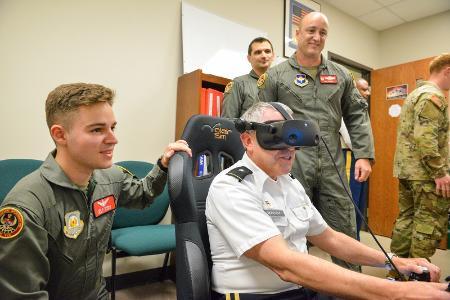 Kilbourne Hall was buzzing with Aviation Excitement this past week when three brand-new flight simulators were unveiled by VMI’s ROTC programs! The Air Force, Navy, and Army ROTC departments have been working around the clock with VMI to develop these joint ROTC flight training assets. The simulators feature virtual-reality capability interlinked with immersive flight controls, delivering a powerful flight training experience.

Present at the ribbon-cutting ceremony were VMI’s Superintendent, Major General Cedric T. Wins ’85, Brigadier General Robert Moreschi, and Brigadier General Dallas Clark ’99. Alongside them were ROTC staff and cadets, on hand to introduce the new equipment and guide them through trying out the flight simulators for themselves.

These simulators will give cadets the opportunity to learn about and develop a proficiency in flying. For those cadets who are off to pilot training after commissioning, the simulators offer a tool to prepare them for their aviation training in their respective services. On board the new simulators, in addition to numerous types and models of aircraft, are the exact same platforms cadets will encounter in pilot training. Army cadets can make use of the Army’s Bell 412 Helicopter, Navy cadets can get acquainted with the Navy’s T-6B Texan II, and Air Force cadets can become cockpit professionals in the Air Force’s T-6A Texan II.

Colonel Philip “Coop” Cooper, the commander of VMI’s Air Force ROTC detachment, expressed the benefits that the new simulators will offer cadets. “We in the ROTC departments are excited that these simulators will give our cadets a competitive advantage at pilot training. Hopefully, [they] will spark a love for aviation in those who maybe have never considered the career field.”