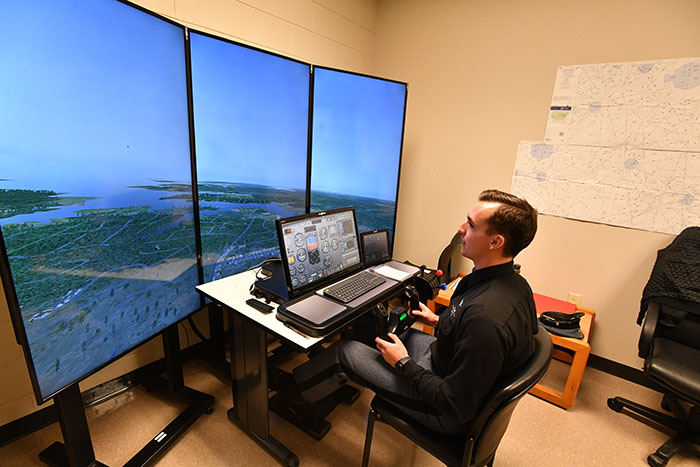 VMI’s Air Force ROTC now has a new tool to get cadets interested in flying and help current Air Force ROTC cadets stay up to date on their training and on track to become pilots stay.

Last fall, the department bought a flight simulator that uses three large screens attached with a table, chair, and a fourth computer screen showing the different instruments, like a real plane.

The simulator can show a variety of aviation controls and allow the pilot to simulate flying in real-life areas.

Air Force ROTC commander Col. Steven Biggs said that before the acquisition of the simulator, the closest place cadets could train, or practice was flying out of Eagle's Nest, a private airport outside of Waynesboro, or the Roanoke Regional Airport.

The simulator gives prospective pilots who might not have been at the controls of a plane before a chance to test it out, an experience that could get them interested in joining the Air Force.

“If it gets some cadet thinking about it and deciding he wants to fly, it has done its job,” Biggs said.

Phillip Meyer ’18 said the simulator works well for learning how to handle emergencies, such as an engine fire, without actually being in an emergency. The only thing the simulator cannot do is flip over, as a real plane might do.

If a certified private instructor was willing to help with the simulator, the department could offer training to maintain a pilot’s license.

Meyer said he already has a license from his time flying in his hometown of Yorktown, and the simulator helps him stay current on his instrument certification.

Eric Arnesen ’18 noted the simulator also helps with the cost of learning to fly. Flying with an instructor can cost up to $125 an hour, while the simulator is free for cadets.

The system runs on Microsoft Flight Simulator software. Charles Remig ’19 said the software is available to consumers, which means it is very customizable, with the ability to add more planes or flight areas to suit the department’s needs.

A cadet is selected each semester to be responsible for the simulator, to help new people try the simulator, and to create individual training plans.

Meyer was the first cadet to have stewardship over the simulator and there was a broad range of cadets, from 4th Class to 1st Class cadets, who wanted to try it out.

“It's a chance to inspire and see firsthand how to fly. They don’t think they can be a pilot, but this is accessible,” he said while demonstrating a simulation of a single-engine Cessna flying over Waynesboro’s Eagle's Nest Airport.

“Some had some hours [in a plane before], and some didn't have any time,” he said of this first group of cadets to log hours on the simulator. And those hours will pay off as cadets continue to explore flight opportunities and those committed to commissioning prepare for more advanced training with the Air Force.