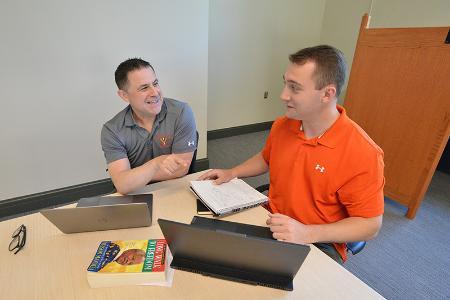 Maj. Jochen Arndt and Mitchell Masterson ’22 compare notes regarding Masterson’s independent research project on the media coverage out of South Africa in the early 1990’s.--VMI Photo by Mary Price.

LEXINGTON, Va., August 11, 2021—In the summer of 2020, Mitchell Masterson ’22 needed a history elective, so he signed up for a class on South Africa with Maj. Jochen Arndt, assistant professor of history.
One thing led to another, and by the spring of this year, Masterson was taking Arndt’s senior capstone course on the end of apartheid in South Africa. This summer, working under the auspices of the Summer Undergraduate Research Institute, Masterson completed an independent research project on media coverage of South Africa’s transition from apartheid to democratic rule, which took place between 1990 and 1994.
“I really liked the question that the capstone brought up, which was, ‘How does the media create the first draft of history?’” said Masterson.
To explore that question further, Masterson decided to examine external versus internal media coverage of South Africa’s transition. For an external news source, he used the New York Times, which had a reporter or reporters on the ground in South Africa from 1990 to 1994. For internal coverage, he relied on a collection of South African newspapers which he accessed via the Foreign Broadcast Information Service (FBIS), a CIA-operated initiative which monitored, collected, translated, and republished foreign newspaper articles for U.S. government officials. He also accessed the South African Press Association, which printed its own newspaper.
Luckily for Masterson, Preston Library recently acquired access to the FBIS database, which has a specific section on apartheid, making it much easier to do research without having to leave post.
Both Masterson and Arndt were quick to note that while it’s commonly believed that South Africa’s transition was a bloodless revolution, this was not the case. Thousands of Black South Africans died in a conflict that erupted in the early 1990s, and ethnic tensions between the Xhosa and Zulu, two groups of indigenous peoples, played a role. It was a political conflict as well, with the African National Congress (ANC), supported largely by Xhosas, and the Inkhata Freedom Party (IFP), supported largely by Zulus, fighting for control of the country.
“It’s a civil war,” said Arndt. “It’s a civil war that is, in this case, taking place in the townships, which are essentially which were segregated living areas for Black Africans… that surround the city of Johannesburg.”
Tensions arose over jobs in Johannesburg, which weren’t plentiful enough for everyone to have employment, as well as transportation to those jobs. Many township dwellers relied on taxis to get to work, and those too sparked conflict.
“There’s violence on the taxis themselves—Molotov cocktails and hand grenades,” Masterson noted.
Unsure of the reasons for the violence and unrest, reporters from the New York Times struggled at first to make sense of the situation. At first, they latched on to ethnicity as the root of the struggle—a reaction that could be ascribed to white bias and a tendency to look for a tribal narrative.
“The New York Times didn’t really know where the violence was coming from, so they started focusing more on the Zulu/Xhosa aspect,” said Masterson. “It’s a bias of seeing Africans as being tribal.”
“When you report on a civil war, you hear a lot of different narratives,” said Arndt.
Masterson commented that even the best-intentioned of journalists can only report what they know and hear.
“Reporters arrive and they hear, ‘These are Zulus and they’re killing us because they’re Xhosa,’ he said. “That’s what they hear.”
But at the same time, coverage within South Africa portrayed the cause of the unrest as political in origin. Over time, as its reporters learned more, the New York Times incorporated this view as well.
Digging deep, of course, takes time. “There’s so many revenge killings going on, so many political peace talks, that the taxis kind of get pushed to the margins, but the economic problems—the lack of job opportunities—it’s a little harder to report on,” said Masterson.
“What’s really interesting in [Masterson’s] project is that … it’s concerned with the historical aspects of what’s going on in the townships,” said Arndt. “But then it’s also concerned with the history of journalism, in the sense of how do journalists report on civil war? He demonstrates that journalists struggle with the messiness of civil wars because with civil wars, there’s never one reason.”
But in the end, the journalists weren’t far off the mark. “Historians do believe that ethnic identity was a factor in the violence, that political rivalry between the IFP and ANC was a factor in the violence,” Arndt stated.
Masterson is looking forward to a December 2021 graduation and the possibility of law school down the road. He plans to present his research on South Africa at the November meeting of the Association for the Study of the Middle East and Africa, to be held in Washington, D.C.
“I really do value what I’ve learned here at VMI,” he stated. “The resources, the people—everything has been incredible.”
⇐ Previous story
Next Story ⇒