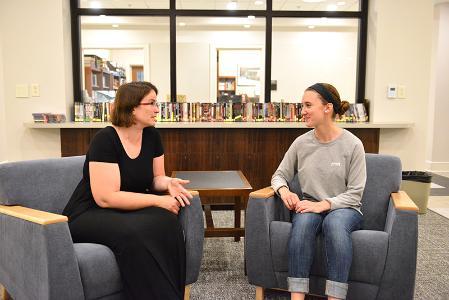 LEXINGTON, Va., August 2, 2021—This summer, Alexandra “Allie” Sassaman ’22 is delving into research for her national security minor thesis, which will focus on the roles of women in terrorism and counter-terrorism and their reasons for involvement.

For Sassaman, who plans to commission into the Marine Corps, the work is part of her professional preparation. “When I am deployed and abroad, I will probably encounter women combatants, and more so in terrorist organizations, so that’s what struck my initial interest,” she explained.

Not surprisingly, it’s difficult to find information about female involvement with terrorist organizations, either directly or indirectly, so Sassaman has been researching women’s participation in conflict over time and across cultures.

“There’s a long history [of women in conflict],” said Dr. Vera Heuer, associate professor of international studies, who is mentoring Sassaman’s work, which is being conducted under the auspices of the Summer Undergraduate Research Institute. “They go back quite a bit.”

For example, there’s the Jegertroppen, a Norwegian special forces group that was formed in 2014. It’s one of the few all-female special forces units in the world, and one that’s been used to search and communicate with women in Afghanistan.

“There’s a lot of cultural sensitivities to that that men can’t necessarily do, but women can,” said Sassaman.

Also, there are an all-female Kurdish group fighting ISIS and the Afghan Female Tactical Platoon. “They’re used like the Norwegian group—kind of like the mediators with the women and the children,” said Sassaman of the Afghan unit.

There’s an important difference between the two groups—the Kurdish one is not state sponsored while the Afghan one is—and that’s raised an interesting question.

“Is the recruitment to counter-terrorism different if you’re basically an expansion of the state, or if you’re fighting in a loose, local fighter group?” asked Heuer.

That’s just one of many questions Sassaman’s research has raised. She describes her summer as one of “sorting and reading,” and she’s been digging through a variety of sources to learn more.

“A lot of it has been scholarly articles from specialists in terrorism,” she stated.

“Data availability is a problem because we’re relying on sources put together by other experts and there’s not that many female interviews,” Heuer added.

But as she sorts and reads, Sassaman is reaping the rewards of learning for learning’s sake.

“There’s a lot to learn, and it’s fascinating to read about,” she said. “As an officer in the military, this is something you could potentially face, and I think that’s intriguing.”