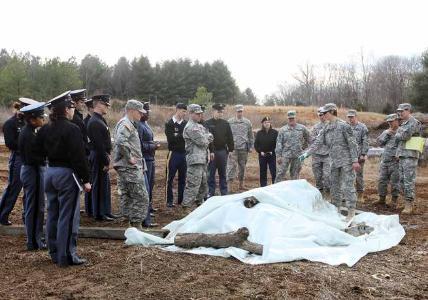 Cadets and faculty investigated the possibility of turning food scraps from Crozet Hall into compost in the spring of 2015.—VMI File Photo by H. Lockwood McLaughlin

Three and a half years ago, a group of faculty members and cadets began an innovative, interdisciplinary project to investigate the viability of recycling food scraps from Crozet Hall into compost. The “living laboratory” project ended when its driving force, Physical Plant sustainability coordinator Jenny deHart, left for employment elsewhere, but the results of the project have recently been accepted for publication.

Cadets and faculty involved came from four departments: biology, economics and business, civil and environmental engineering, and mechanical engineering. The compost bins for the pilot project were located off post at Hinty Hall, site of VMI’s Physical Plant.

Lt. Col. Anne Alerding, associate professor of biology and the paper’s lead author, said she’d like to see more green initiatives such as this one at VMI—and getting composting going again would be on the list of projects to explore.

“It potentially could save money,” said Alerding. “Also, it creates this learning environment where you take a real-world problem and you bring the students in from different departments with different strengths to solve it.”

Alerding noted that with an economic analysis, it’s quite possible to measure both the costs of composting—mostly human labor and transportation costs—and the cost savings from reduced tipping fees at the landfill. But it’s the intangibles, such as learning to think outside the box and interacting with peers from different disciplines, that were equally valuable to VMI’s compost experiment, Alerding and other faculty members stated.

“The whole thing was innovative in that it was experiential learning,” said Col. Sam Allen, professor of economics and business and one of the paper’s authors. “We got students to work in an interdisciplinary way. The ECBU students really hadn’t thought about the biology at all, but you get them out there and start shoveling the food waste from Crozet, and it certainly becomes up close and personal.”

While the project was ongoing, Allen supervised the work of two cadets majoring in economics and business, both of whom were charged with coming up with a cost-benefit analysis for the compost project. Those cadets found that composting could save the Institute anywhere from $10,500 to $17,500 per year, with those savings coming in the form of reduced landfill tipping fees and less need to purchase prepackaged fertilizer.

A number of cadets majoring in civil and environmental engineering also contributed to the living laboratory project as they worked together to find a way to measure temperature in the compost pile—a necessary step because compost must reach a certain temperature in order to kill pathogens. In addition, the group created a feasibility plan for waste management and designed a structure that would serve as the compost project’s permanent home. Mechanical engineering cadets, meanwhile, were asked to design a ventilation system to keep the compost bins aerated.

“It was an opportunity for the cadets to take the fundamental skills learned in the classroom and apply them to a real-world problem,” said Maj. Paul Ackerman ’93, assistant professor of civil and environmental engineering, who had supervised the cadets’ work.

Interdisciplinary projects such as this one are invaluable for cadets, Ackerman believes, because they prepare future engineers for the world they’ll encounter once they graduate. “That’s the reality of civil engineers,” Ackerman commented. “Their clients are not engineers. They tend to be very diverse.”

Echoing Ackerman’s comments was Lt. Col. Emily Lilly, associate professor of biology. Her role in the project was to help cadets understand the role that microbes play in bacterial decomposition—a critical factor because compost must reach a certain temperature in order to kill pathogens, yet actual sterility is not beneficial because healthy soil contains some bacteria.
Working with cadets and faculty from other disciplines, Lilly believes, is vital to cadets’ preparation for life after VMI.

“It helps to expose the cadets to something beyond their comfort zone,” she commented. “That’s what’s going to happen to them when they graduate. The chances of them being in a mono-disciplinary field are slim. Life is multi-disciplinary, and you don’t know what kind of job they’re going to get.”