Cadets give blood in Cocke Hall during a December blood drive.—VMI Photo by Kelly Nye.

Since its inception in 1839, VMI has striven to inculcate the value of service in its cadets. But how deep does that really go, and how much does VMI’s emphasis on service above self make a difference in cadets’ day-to-day behavior?

When it comes to blood donations, it makes quite a bit of difference, according to research recently published by Col. Sam Allen and Dr. Bing Jiang, two faculty members in the economics and business department. Their paper, “To Be a Blood Donor or Not to Be? Investigating Institutional and Student Characteristics at a Military College,” was published in October in the B. E. Journal of Economic Analysis and Policy.

The letters “B.E.” in the journal-title refer to behavioral economics, an area of study that focuses on how and why people behave in an altruistic manner. Allen and Jiang, both behavioral economists, had long wanted to study how social norms at VMI affect cadet behavior, and the Institute’s four blood drives per year provided a way to do just that.

“We decided to ask if we could get information on which students were donating blood, and it’s pretty dramatic if you compare VMI … to other schools,” said Allen. “Participation rates are really high at VMI.”

Studying donation rates for 21 blood drives conducted between 2013 and 2018, the economists found that 15.7 percent of the Corps donates at least once per year—a figure that’s almost double the national average for 18- to 24-year-olds.

And while blood donation is an activity done with others in mind, VMI does sweeten the pot for cadets who donate by offering incentives. Not surprisingly, these incentives seem to play a role in who donates and when they do so. 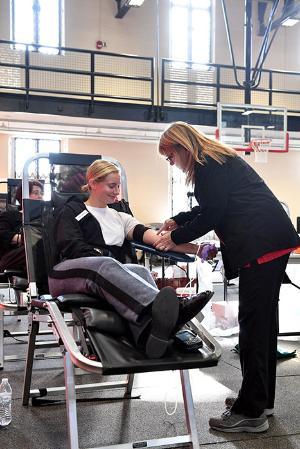 “Students tend to donate pretty heavily in September,” noted Allen, explaining that the rewards don’t carry over from one academic year to the next and in the fall, with a long academic year ahead, time away from post is highly valued.

The economists also found that younger cadets donate more often than older ones. This finding can likely be explained by the VMI system of class privileges, they noted. As cadets advance into the 2nd and 1st Class years, they have more ways of earning privileges such as time off post, whereas younger cadets are more limited in their options.

But Jiang was quick to add that older cadets may be participating in more activities—and that extra participation may not leave them enough time to donate blood. “We don’t have a way to capture that,” she stated.

In addition, in-state cadets donate more than their out-of-state counterparts—again, likely because an in-state cadet can get home for a weekend more easily. Cadets with high GPAs are less likely to donate, possibly because they spend more time studying, and cadets with high fitness levels are more likely to do so, although NCAA athletes donate at a rate that is slightly less than the rest of the Corps.

But despite all of these findings, Allen and Jiang still conclude that many cadets will donate when they receive no payback at all. “We have lots of students who donate four times per year,” said Allen.

In their blood donation study, Allen and Jiang were drawing from the work of George Akerlof, a Nobel Prize-winning economist who is credited with helping to create the field of identity economics, which has to do with how individuals’ sense of themselves in society affects the choices they make.

At VMI, this means studying how the ideal of the citizen-soldier sways cadets’ choices toward pro-social behavior.

“When people give money, give to charity, give blood, there’s no direct benefit,” explained Jiang. “We want to understand why people give.”

And while Allen and Jiang are no doubt pleased to see their work appear in print, they’re far from done with their research into cadets’ pro-social behavior. Next, they tentatively plan to study blood donation as a predictor of future military service.