When he received the word in the spring that he’d been selected for a Fulbright award allowing him to teach in Hong Kong for the fall 2019 semester, Col. Howard Sanborn knew that rumblings of civil unrest were beginning in the former British crown colony, now officially a special administrative region of the People’s Republic of China.

However, there was no way that Sanborn, professor of international studies, could have known that not only would the pro-democracy protests come to his host campus, the Chinese University of Hong Kong, but that they would rise to such a level that the rest of the semester would be canceled in mid-November. Nor could he have known that he’d wind up fleeing the campus on foot, carrying a week’s worth of clothes in a rucksack.

Originally, Sanborn, an East Asia and comparative politics specialist, had hoped to use his time in Hong Kong to study the city’s legislature, the Legislative Council, a 70-member body that’s made up of a mix of individuals elected from the citizenry by a popular vote and people elected to represent certain sectors of society such as finance, insurance, and education.

“[The Legislative Council] offers an interesting natural experiment to see how people from traditionally Democratic constituencies … pursue their careers versus the people from these sector-specific [groups],” Sanborn noted. “That was the germ of the research.”

However, the Legislative Council was closed for much of the time Sanborn was in Hong Kong because protesters had vandalized its building over the summer. Instead, Sanborn used the four months he was there to teach a class on democracies in the west, and also to network with others and pursue another line of research—this one having to do with higher education and its effect on citizenship in Hong Kong.

It was a challenging time to be a university professor. When Sanborn first saw a student roster for his class, there were approximately 50 names. However, many students wound up dropping the class, and others often didn’t show up because they were taking part in class boycotts encouraged by protestors. At one point in October, there were fewer than 10 students in Sanborn’s class.

“It was difficult to build a rapport with the students because of all of the stuff going on,” Sanborn reported.

Then, in mid-November, the protests struck close to home. As conflicts between student protesters and police escalated, Sanborn began to realize that although he was safe in his high-rise apartment, and he had plenty of food, there was the possibility that he’d be barricaded in his building by the ongoing conflict and unable to get out for more supplies. When friends called to ask if he’d like a ride to a safer part of the city, Sanborn accepted.

Before leaving, he let a friend know where a spare key to his apartment was located, just in case she ran out of food and needed more. Then he set out on foot.

“I took a week’s worth of clothes, not knowing when I’d come back,” he recalled. “The protesters were fine. They didn’t give me any problems.”

After climbing over several barricades, and helping others to do the same, Sanborn met up with his friends and took a ride to a hotel, where he stayed for approximately a week.

“I never felt physically in danger,” Sanborn stated. He was worried, though, about what might happen if the electricity or water were to be cut off.

Others, though, were quite concerned about Sanborn’s safety. No sooner had he checked in to the hotel than he was on the phone with Col. Dennis Foster, chair of the international studies department, and Brig. Gen. Robert “Bob” Moreschi, deputy superintendent for academics and dean of the faculty.

“The dean and [Foster] were concerned for the right reasons,” said Sanborn. “They were very, very supportive.” 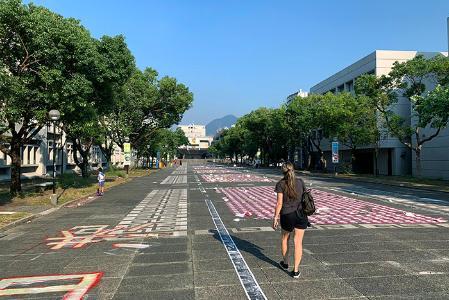 Sanborn also reported receiving good support from U.S. officials in Hong Kong. “I was in constant communication with the U.S. consulate,” he said. “They were incredible, keeping an eye out, asking if I was okay, asking if I needed anything.”

After a week in the hotel, Sanborn flew to Tokyo to celebrate Thanksgiving with his wife and three teenagers, who’d flown over to join him there. Originally, the family had planned to spend the holiday in Hong Kong, but with safety in mind, Sanborn and his wife decided to have another kind of Asian holiday instead.

In late November, Sanborn flew back to Hong Kong for another two weeks there before returning to the United States.

Now, he’s busy not only teaching his own classes but also serving as acting department head while Foster is on leave this semester.

He’s also been fielding a plethora of questions from cadets and fellow faculty members. In mid-January, Sanborn related, he went over the syllabus for an applied statistics class he’s teaching and then asked if there were any questions, thinking cadets might seek clarification about the syllabus. Immediately, a cadet’s hand popped up: “Tell us what you did in Hong Kong!”

Sanborn also noted that his experience abroad was not quite the adventure that cadets imagine it was.

“They expect a mixture of Indiana Jones and Jason Bourne,” he commented. “They’re a little deflated when I tell them, ‘No, I was just there to study legislative politics.’”

On a more serious note, Sanborn has returned from Hong Kong with a message not only for the VMI community but also for his fellow Americans as a whole: don’t take American democracy for granted. It’s a lesson he learned from watching young Hong Kong residents wave American flags and carry posters depicting President Donald Trump as they protested Chinese rule.

“Americans have democracy, freedom, liberty, fairness, and equality,” said Sanborn. “It’s the values that support the waving of the flag that matter to those people. … Now more than ever, we have a responsibility to stay engaged and participate and lead as democratic citizens.”

For several years now, Col. Howard Sanborn, professor of international studies, has made regular trips to Asia, often doing research on democracy there. This past fall, though, he got a front-row seat on the struggle for self-rule when he traveled to Hong Kong for a semester thanks to a Fulbright grant from the U.S. State Department.

“Generally, the protests, to my eye, were very peaceful,” said Sanborn. “I would come across a few hundred or a few thousand people walking out, let’s say, during lunch.”

And as much as he might have liked to immerse himself at the moment—and come back with an even deeper firsthand perspective of what it was like to be there—Sanborn purposely kept away from the big protest movements.

“I didn’t want to contribute to this false narrative that there was a western, secret project to instigate protests,” Sanborn explained. He added that Chinese media were reporting that British and American operatives were behind the protests—and in Asia, Westerners stand out in photos.

Instead, Sanborn learned from watching as he traveled back and forth from his apartment to the Chinese University of Hong Kong, where he taught a class on democracies in the west. On-campus, evidence of the protest movement was everywhere.

“There, I saw a lot of protest art, a lot of graffiti in support of the protests,” he commented. He recalled seeing the words “liberate Hong Kong” written in Cantonese, and also much pro-American protest art depicting President Donald Trump and Vice President Mike Pence. Sanborn interpreted the American imagery as “a way of desperately asking for help to support the protests.”

Sometimes Sanborn’s travels to and from the campus would be impacted by the ongoing unrest. Millions of Hong Kong residents and visitors use the subway system, known as MTR, every day, and Sanborn was among them until the station nearest the campus was vandalized and then closed for weeks afterward. After that, he took buses or used Uber to get to campus, although the latter was an expensive choice. Soon, frustrated Hong Kongers began to call the train system the “empty R” because so many stations were closed.

But despite the challenges he and others encountered in Hong Kong last year, Sanborn hasn’t given up on his longtime dream of someday creating a program that would take cadets to Asia on a regular basis.

“I’m hoping that down the road, things will die down in the city because Hong Kong is a perfect gateway into Asia,” he commented. “It’s just a great place. It’s beautiful. It’s scenic. It has everything you could want in a big city.”