LEXINGTON, Va., Sept. 4, 2020—Easily recognizable in their navy blue shirts, VMI’s cadet emergency medical technicians (EMTs) seem to be everywhere at certain times of the year. During Matriculation Week, the period of time immediately following the arrival of rats, some of them are working almost 18 hours a day as the new cadets and their cadre train in the August heat.

But even when life at the Institute is quieter, the EMTs are there, ready to step up and step in should an injury or illness strike.

“As cadet EMTs, we make sure the entire Corps is covered,” said Allen Xu ’21, cadet in charge of the cadet EMTs.

He quickly added, though, that the EMTs aren’t just there for cadets. They also help faculty, staff, and visitors to post when necessary. “At any events, we’re making sure the public is covered,” he commented. “A lot of it is accident prevention and response to an accident.”

And thankfully, there’s no shortage of EMTs: cadet interest is strong, and this year, once all cadets currently in the pipeline have finished their training, there will be 71 cadet EMTs, a record number. Ten years ago, for example, there were only about 25.

“It’s the largest it’s ever been,” said Samantha Schwegel ’21, a cadet EMT and physics major who hopes to become a Naval flight officer. “We’re very excited about those numbers.”

VMI has had cadet EMTs since the 1990s, explained Donnie McBrayer, EMT advisor, but back in those days, there were only a handful—perhaps four to six. In the spring of 2016, they became certified by the state as a non-transport emergency medical service (EMS) agency. Thanks to that certification, VMI’s cadet EMTs can now handle 911 calls on post rather than waiting for the Lexington Fire Department’s EMTs to arrive. Now, Lexington only gets called if the patient in question needs transportation to a hospital.

That does happen, of course, but most often, cadet injuries and illnesses can be treated on post. During Matriculation Week, EMTs assigned to each company follow the rats throughout all their activities and treat everything from panic attacks and upset stomachs to orthopedic injuries.

To say that the cadet EMTs have long days during Matriculation Week is an understatement.

“We need to be awake before the cadre,” said Schwegel, adding that during that week, she’s usually up around 5:40 a.m. “We’re on our feet all day with very minimal breaks, and we don’t go to bed until everyone else has gone to bed, which is around 11:30.”

Perhaps appropriately, the EMT-B (basic) course that all aspiring cadet EMTs must take and pass in order to earn their certification is likewise arduous. In the summer of 2018, Xu, Schwegel, and Wagner all took the course together. For four weeks, the three were in class each weekday from 8 a.m. to 5 p.m.

“When you do have your breaks, you’re using your time to study and catch up, and you also have to do ride-a-longs in town,” Schwegel commented. Ride-alongs, she explained, are when an EMT in training accompanies EMTs from an agency such as the Lexington Fire Department on their calls. Ten ride-alongs are required for EMT certification, as are passing a national-level exam and holding CPR certification. 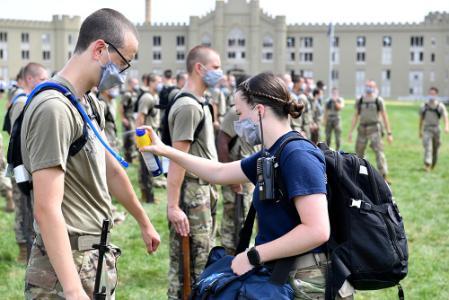 During much of the school year, the EMTs aren’t as visible as they are during Matriculation Week, but they’re still there to assist as needed. They’re at each football and basketball game, and when the entire Corps travels to an event, the EMTs always accompany them. At parades, they’re there for everyone, members of the VMI community, and visitors to post alike.

“We don’t wear these uniforms [at parades],” said Schwegel. “We blend in with the crowd, but we carry backpacks and radios.”

Of course, there’s also been COVID-19-specific education needed. “We got PowerPoint trainings from Carilion Patient Transport, and we used that to do some training on the precautions and also the signs and symptoms of COVID,” said McBrayer. He added that the commandant’s office has made sure that the cadet EMTs have plenty of personal protective equipment (PPE), including N95 masks.

So far, COVID-19 hasn’t greatly changed life on post for cadet EMTs, but there are a few extra duties. During Rat Sunday, for example, cadet EMTs were stationed outside Marshall Hall to take the temperatures of community members coming to the event, and on Matriculation Day, they performed health screenings for all incoming rats and those accompanying them.

But despite the coronavirus pandemic, the long days each August, and the summertime heat—sometimes followed by the extreme cold of Breakout in winter—the cadet EMTs love their jobs.

“It’s a people game,” said Xu, who plans to become an Army doctor. “It’s interacting with patients. One day your patient might want to become an EMT based off how you interact with them.”

For Wagner, the EMT experience has changed his future plans. He had once wanted to commission into the Marine Corps, but now he plans to enlist in the Air Force and do combat rescue instead.

“You have to work together to succeed … [and] make sure the Corps and everyone is safe,” he said.

He’s even found time to volunteer with the Fairfield Volunteer Rescue Squad, which has given him a unique perspective on how Rockbridge area community members view VMI.

“They’re always interested in seeing how VMI works, and you get to hear their viewpoints,” he commented.

Schwegel enjoys the bond she’s developed with fellow EMTs like Xu and Wagner.

“We’re kind of like a big family almost,” she said. “I’m with these guys every day. We took the class together back in the summer of 2018 so we’ve all grown…Plus I love helping people. Col.  [Bill] Wanovich [commandant] describes us as citizen-soldiers.”