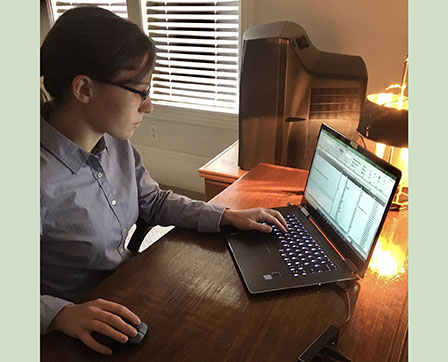 “Memes are just an interesting concept.”

That’s what Josie Freeman ’23 has to say about her Summer Undergraduate Research Institute project, “Motivation for Memes.” Freeman, a psychology major who hopes to commission into the Air Force, chose her topic because she likes research and she is amused and fascinated with the cultural phenomenon of memes, which are concepts conveyed through text, graphics, photo, or video and then shared widely via social media.

“Memes are very popular, especially among my age group, and I was like, ‘Well, why do people look at memes?’” she commented.

After shifting her research goal to focus on what kinds of people look at memes, Freeman worked with her academic and SURI adviser, Col. Scott Frein, a professor of psychology, to design a survey that was sent out to VMI cadets.

The survey, which included approximately 100 questions, asked participants how often they look at memes, how does looking at memes make them feel, and how often do they create memes. The participants were then asked questions from accredited scales designed to measure personality traits and mental health.

Once the results were in, Freeman ran a t-test, which is a statistical tool often used in the social sciences to determine if the means of two groups are statistically different from one another.

“In [Freeman’s]research, one analysis she did was to divide the participants into high and low meme viewers based on their survey responses, and then she compared those two groups on a number of items,” explained Frein.

The t-test resulted in an interesting finding. “There was a significance with how people scored in agreeableness and conscientiousness on the Big 5 scale and those who looked at memes less,” said Freeman. The Big 5 scale includes five traits broadly used to describe the human personality: extraversion, conscientiousness, openness to experience, agreeableness, and neuroticism.

As of mid-June, Freeman was still trying to make sense of her results, but she did have a few preliminary thoughts. “The high conscientiousness makes sense,” she commented. “Maybe [conscientious people] don’t want to waste their time on memes. They’re more responsible with their time management. High agreeableness did shock me."

It’s a correlation she can’t quite understand. “You’d think that people with high agreeableness would want to look at memes more because they’re popular,” Freeman stated.

Down the road, Freeman would like to test another hypothesis: that memes are a form of sensation-seeking. It’s a research angle that Frein supports. He noted that Freeman’s results will need to be validated with another group of test subjects, and then there are options for what to study next.

“We might try to study the effects of meme viewing in some way,“ Frein wrote in an email.“For example, this summer we asked people about their meme viewing behavior, but we did not actually have any participants look at memes as part of our study. In a future study, we might ask participants to view memes and see what effect, if any, it has on their mood.”