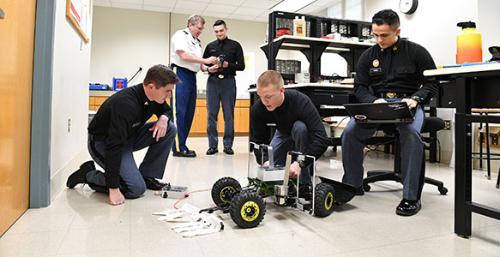 For more than a decade, the tick rover, a longtime project for Col. Jim Squire, professor of electrical and computer engineering, has provided research and learning opportunities for cadets. Now, despite the coronavirus pandemic this spring that’s cast a pall over post and all over the globe, the tick rover has won a national award, with the VMI team beating out teams from several nationally recognized research universities, and is headed to the international stage.

Over the winter, four cadets—Frankie Celentano ’20, Michael St. John ’20, Eric Munro ’21, and Joseph Lieber ’23­—took the tick rover, which is a robot designed to remove and kill ticks from people’s yards, and tweaked it further before entering the new and improved rover in a contest sponsored by the Institute of Electrical and Electronics Engineers (IEEE).

In late April, weeks after the cadets had headed home for the remainder of the semester, Squire found out that the VMI group had won the national competition. As a result, Squire and the cadets have been invited to Seville, Spain, Oct. 12-14 for the international competition, with their airfare and hotel costs paid for by IEEE. There, they’ll be among four teams competing, with the others coming from South America, Europe, and Asia.

“I cannot express how grateful I am knowing that our team will be able to represent the United States in this competition,” Celentano wrote in an email. “We all worked extremely hard on this project and it is nice to know that there are others out there who appreciate our efforts.”

But national or international accolades were the last thing on anyone’s mind when Celentano approached Squire over 18 months ago seeking an Institute Honors project. While pleased with how the rover had progressed over the years, Squire knew that there was definitely room for improvement.

Recent work on the rover had included alterations to the mechanics of the wings, which trap ticks hiding on bushes. That initiative was done in the mechanical engineering department by Michael Landry ’18 and Matthew Davis ’18, working under the direction of Col. Jay Sullivan, professor of mechanical engineering. On the electrical side, though, there was plenty of work left to do.

Jumping in the cold when he hadn’t been a part of the original design process was hard, so Celentano started with work on the base station that provides the navigation signal for the robot to follow.

“It was a good way to get acclimated to the design of the system, how the system works, and also working within a project where I didn’t see the original design,” he commented.

Squire explained that many of the changes Celentano made were designed to make the rover easier to use for non-engineers. Previous versions had run into trouble during field testing because the biologists in charge of the testing had trouble recognizing when the rover’s battery was low, so Celentano added an audible low-battery alarm. He also wrote stronger algorithms to control the rover’s speed and steering. Before, Squire explained, the rover went off course almost constantly. 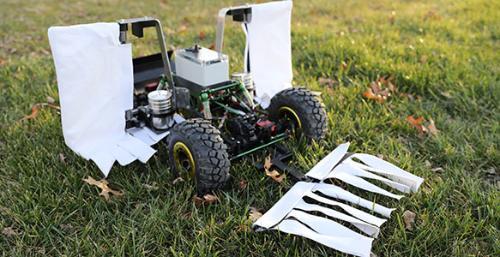 Because the IEEE competition requires a team entry, Celentano recruited others to work with him on the project. His first recruit, St. John, was easy to find because Celentano and St. John were roommates.

“When I came onto the project, I basically had to learn everything from scratch,” said St. John, who took the role of the technical writer. His job was to write an essay explaining how the rover works—and Squire noted that because of the complexity of the subject matter, St. John went through approximately 20 revisions to meet IEEE’s exacting criteria.

The essay also had to explain the “why” of the project—how it would serve the public good. “Tick populations are increasing, and nothing has been done about it in an environmentally friendly way,” St. John noted.

Munro, meanwhile, added a very user-friendly twist to the robot, as operators can now check its battery level via their smartphones. He’d had some experience getting an Android phone to link to a sensor via Bluetooth when he was in high school, but getting the same concept to work with the rover took some doing.

“My biggest challenge was the previous solution before I came on board was how I normally would have read voltage levels, and being told that didn’t work, I had to consider other options,” he commented. On the plus side, Munro noted that he’d “added a new tool to the tool belt” by learning SPI, an industry-standard communications protocol.

Also contributing his expertise was Lieber, who, although only in his rat year at VMI, was able to lend a hand with mechanical design and 3D modeling. He’d developed strong engineering skills while in high school at Mercersburg Academy, a boarding school in Mercersburg, Pennsylvania, and had emailed Squire over the summer seeking a project to work on.

“[Lieber’s] got the knowledge and practical experience of one of our typical sophomore, junior-level mechanical engineers,” said Squire. “That’s what he came in with, which is very unusual for an electrical engineer.”

But that’s not to say Lieber didn’t have anything to learn—quite the contrary. Before he could help with the rover, Lieber had to learn new software. In high school, he’d used Fusion 360, a 3D modeling software—but that wasn’t what VMI was using.

“When I came here, all of the models were on SolidWorks, which uses a slightly different file format, so I decided to start learning SolidWorks,” he explained. “That way I could learn the industry standard.”

The group also had the assistance of Brett Tomajczyk ’19, who helped to implement the four-wheel-drive system for the rover and also wrote the code for the throttle control system that enables the rover to keep a consistent speed on hilly terrain.

It’s no surprise that Squire, who has spent countless hours working on the rover ever since he helped to create it in 2004, is more than proud of what the cadets have achieved.

“[Celentano] and his team have done amazing work on this device, among the best I have advised at VMI,” Squire wrote in an email. “The last student project I advised to make it to nationals was by Matt Brooks ‘02. The fact that this team, combining freshmen through seniors, will represent the United States and Canada at the world finals says a lot about Frankie’s leadership.”

But beyond the national award and the possibility of an international trip, Squire is also pleased that years of hard work on the part of dozens of individuals have produced a much sturdier device than the creators of the prototype could ever have envisioned.

“[The current rover] involves a lot more electronic user feedback to let a non-electrical engineer figure out why it’s not working why it should be in the field,” said Squire.

And soon, his decade and a half of tick rover development may come to an end. “After this, we’re looking at hopefully licensing it,” Squire noted. “We’ve got a neuroscientist over at Dartmouth [College] who wants to start a company based on it.”

This and other stories are avaialable in the VMI Institute Report.