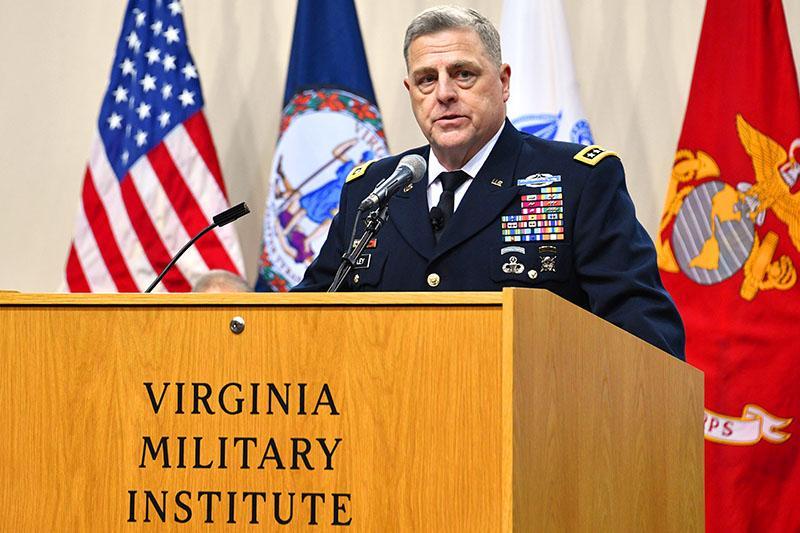 LEXINGTON, Va., Feb. 8, 2017 – A phenomenal shift in how warfare is conducted will take place within the next generation, and learning from the past can help military leaders foresee and prepare for future conflicts, the U.S. Army chief of staff told the VMI Corps of Cadets earlier today in Cameron Hall.

Gen. Mark Milley, a four-star general who has served as the Army’s 39th chief of staff since August 2015, addressed cadets, faculty, staff, and community members about not only the lessons of history but also the massive shift in how armed conflict is conducted that is almost certain to occur in decades to come.

Beginning with the past, Milley talked about why it’s important to look at current events through the lens of history.

“What history does is gives you flavor and seasoning and perspective,” said Milley, a veteran of the conflicts in Panama, Haiti, Bosnia-Herzegovina, Iraq, Afghanistan, and more. “I find one of the ways to learn best is through a deep, wide-ranging, and critical study of history, specifically military history. … What you’re doing there is learning from others who came before you.”

“Aggression left unanswered leads to more aggression,” Milley said. He noted that over 100 million people, both service members and civilians, were killed from 1914 to 1945 in the two world wars. “The butcher’s bill of unpreparedness is always paid in blood.”

Ultimately, the threat of fascism was quenched, and World War II was won, Milley noted, thanks to the efforts of a VMI alumnus, George C. Marshall, VMI Class of 1901, who became chief of staff of the U.S. Army on the eve of World War II.

“[Marshall] is the finest military officer that America has ever produced,” the 37-year career Army officer stated, adding that he keeps a portrait of Marshall over his desk. “World War II would not have been won without a VMI graduate by the name of George C. Marshall.”

Milley reminded his listeners that while Marshall is long deceased, the need for visionary leadership is ongoing. “Somewhere in this audience is the next George Marshall,” Milley declared. “One of you is going to step into his shoes. … All of you in one way or the other will lead our nation into the future.”

That leadership, the chief of staff believes, will demand that military officers be constantly at the ready, physically and mentally fit, and willing to work with others, both members of other branches of the service and foreign allies.

“On a battlefield we are all one team,” Milley stated. “The U.S. military is one team and we are mutually interdependent.”

Nor does the military go to war by itself. “We don’t go to war,” the general observed. “The nation goes to war …. It’s all of us, all in, all of the time.”

After discussing the lessons of history, Milley shared with his listeners what he believes to be a most urgent lesson for the future: the need to prepare for a massive shift in how warfare is conducted. “The character of war … the ways and means of war … is, in my mind, about to undergo fundamental, profound, and significant change in the next 10 to 15 or so years.”

Milley observed that technology will play a leading role in this change, as there are already more Internet-connected devices than there are people. “You will be able to be tracked and observed,” Milley stated. “The proliferation of information technology is diffusing power.”

Robots, too, will eliminate entire job categories, Milley believes, and will make their presence known on the battlefield as well. “The time will come when robots will have widespread use in the conduct of ground war,” Milley predicted.

The “where” of war will also change, in addition to the “how.” Urbanization will bring war more often to cities, Milley said—a sharp contrast to hundreds of years of fighting in farm fields and rural areas.

“Guys like Gen. Peay and myself will not even recognize the battlefield that you fight on in 2035 or 2050,” Milley predicted. “In the past, changes in the character of war, the elements, were all evident prior to that war. … People couldn’t connect the dots. They couldn’t anticipate. It’s our collective task to do better.”

With this need in mind, Milley stated that both the military and the warfare of the future will place “a very, very high premium on tough, fit, smart, adaptable, and risk-taking leaders, from lieutenant to general. … Our nation deserves a military that wins, and wins by the rules. It deserves leaders of character, courage and commitment. It deserves graduates of VMI.”