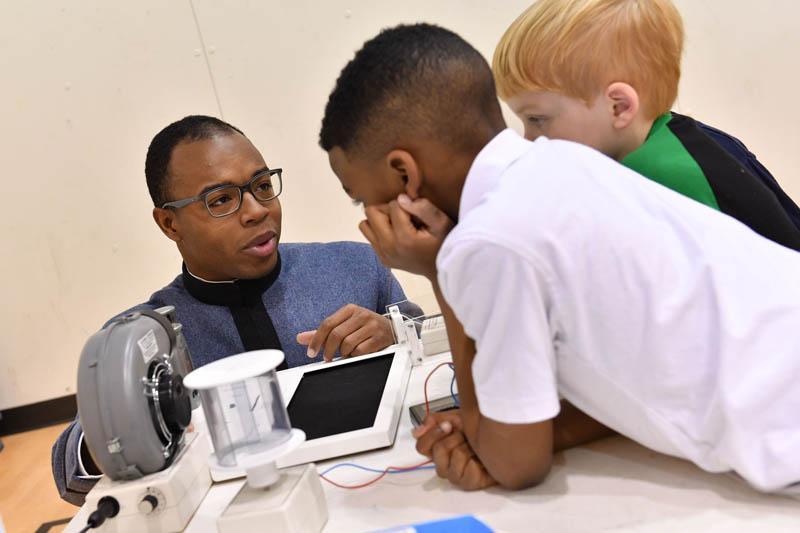 LEXINGTON, Va., March 24, 2017 – Cadets in VMI’s chapter of NSBE – the National Society of Black Engineers – are finding engagement in an organization that is promoting their professional growth and allowing them to give back to the community.

Four cadets in the club recently had a chance to get an idea of the opportunities that await them outside of VMI when they attended a conference in Washington, D.C., specifically designed for minority students.

In addition to attending conferences, the members of NSBE also work to encourage the next generation of young engineers through STEM-based outreach to local youth. NSBE also sponsors a fashion show each April so cadets can hone their skills in professional dress and customs.

Retention is one of the key goals of NSBE – and so is professional growth. At VMI, the 20 active chapter members put much emphasis on helping others, and particularly younger cadets, acquire the skills necessary to succeed.

“We do cover letters, resumes, how to speak on their feet, how to promote themselves in the first 30 seconds,” explained Buka Anwah ’18, who’s acting president of the VMI chapter of NSBE this year.

It was the second year in a row for cadets to attend the BEYA conference, as Idewu took a group to the organization’s conference last year in Philadelphia. This year’s conference attracted over 2,000 students from colleges and universities across the nation.

“I wanted to take cadets to a conference that would expose them to some kind of a professional environment outside of VMI,” said Idewu. He added that exposure to high-ranking military officers is another draw, as many officers from all branches of the service attend the BEYA conference each year. “You have two-star, three-star, sometimes four-star generals,” Idewu explained.

At the same time, a large number of defense contractors and many graduate schools attend the job fair at BEYA, making the gathering a natural fit for interviews and networking. Young as they were, with three of the four attendees still in their 4th Class year at VMI, the cadets who attended this year’s BEYA conference didn’t waste time in making connections at the job fair.

Johnson, a mechanical engineering major, had an interview with one major defense contractor and talked with representatives of two more. “The most important aspect that I took away from the conference was networking – how meeting new people can open up new bridges for you,” he said.

Also enjoying the chance to meet new people and make connections was Ola Ekundayo ’19, a computer and information sciences major. “It was a great way to see big companies and what they’re about,” she said. “Also, it was a great way to be around people like me, role models for me, really.”

While at the conference, Ekundayo also had interviews with defense contractors, even though she has an internship already lined up for the summer. “I definitely want to continue to interview to get a feel for all of the different companies,” she stated.

Boyd, who’s majoring in computer and information sciences, also interviewed with a defense contractor – and may have a shot at an internship in California on a joint project with that company and NASA this summer. “[The interviewer] liked the fact that I was young and at this conference, exposing myself to this,” she said. “He liked that I was enthusiastic about NASA and the stars. My far-fetched dream is to become an astronaut.”

For Idewu, taking young cadets to conferences such as this is vital to their personal and professional development.

“Whenever you can get anybody, especially young folks, involved with something early, they feel more attached to that thing they got involved with,” he commented. “That is a retention component.”-