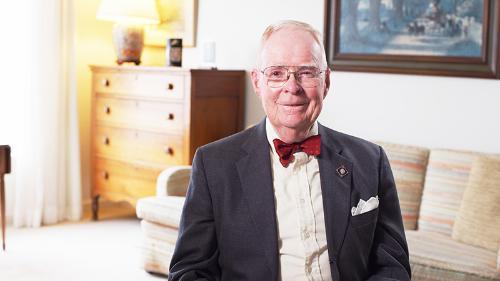 This story has been updated with a link to his obituary.

LEXINGTON, Va., May 29, 2020—The Superintendent regrets to inform the VMI community of the death of Col. D. Rae Carpenter Jr., former head of the physics department at VMI, at the age of 92. He passed away on May 26 at Kendal of Lexington.

In a decades-long partnership with fellow VMI professor and Roanoke alumnus Dr. Richard Minnix, the two created popular physics demonstrations for teachers and students. The Dick and Rae Physics Demo Notebook was purchased on every continent except Antarctica.

Col. Tim Hodges '80, professor and current head of the physics department, knew Col. Carpenter as a teacher, a colleague, and a member of the community. Hodges says, "He was always a leader, in the department and in physics education. He utilized small items and simple ideas to demonstrate physics concepts. Teachers would learn from him, and then go on to teach many students. His impact on the world and on cadets was immense. He's been instrumental at our church and in the community. I learned a lot from him."