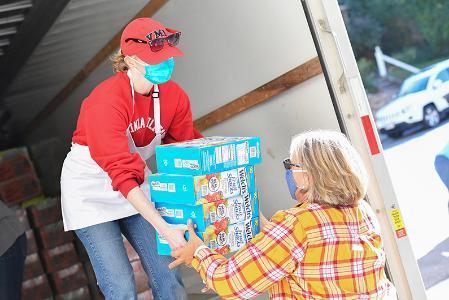 LEXINGTON, Va., Oct. 11, 2020—The idea began in early September in an online forum for the mothers of cadets—how do they show cadets that they are cared for in spite of Parents Weekend being canceled this year?

Melisse Hoyer, a member of the VMI Moms in Prayer 2022 Facebook group, had some thoughts, but they were ambitious, to say the least. Hoyer, mother of David Turner ’22, wanted to make and deliver a care package to every single cadet.

On Saturday, Oct. 3, Hoyer and a group of approximately 30 others volunteered their time to assemble the packages and put them on a U-Haul truck for delivery. Working with Command Sgt. Major Suzanne Rubenstein, director of activities for the commandant’s office, Hoyer and her helpers created packages for approximately 1,690 cadets—and then added 100 more just in case anyone was overlooked.

“With the cadets confined to post, and the parents unable to visit, we wanted a way to show them a little love and let them know they’re thought about,” said Angie Shay, mother of Ainsley Fritter ’23. “This was a way to get packages to every single rat or cadet so they felt loved and looked after.”

But first, the items in the packages, ranging from hot chocolate mix and candy to beef jerky and other prepackaged snacks, had to be purchased. The women spearheading the effort, who’d dubbed themselves the Crazy VMI Moms, set a goal of raising $34,000, which was based on a cost estimate of $20 per cadet. They set up a Facebook page, the VMI Pandemic Package Corps—and within a few weeks, they’d not only met their fundraising goal but exceeded it.

“We overshot what we needed,” said Maria Wiemann, mother of Lance Wiemann ’22. “We were able to buy more than we’d planned.”

On Friday, Oct. 2, Wiemann flew from her Dallas, Texas, home to Baltimore, Maryland, and caught a ride with a friend to VMI. The next morning, they traveled to the Corps Physical Training Facility parking deck to pack individual bags for each cadet. Cadets with food allergies received packages tailored specifically to them, and all cadets received a note of encouragement.

Via the Facebook group, Hoyer, Wiemann, and others had reached out to parents of cadets, encouraging them to either email or snail mail personal notes to their cadets, to be included in the care packages. The Crazy VMI Moms made sure that no cadet was left out.

By the time the packages were filled, labeled, sorted into boxes by room number, and delivered to Lejeune Hall, it was 9 p.m. Saturday. Delivery took place Sunday, Oct. 4, and carried over to Monday, Oct. 5. It would have been a big undertaking if all cadets had been in barracks, but it was made doubly hard by the fact that some cadets were in isolation due to a positive COVID-19 diagnosis and others were in quarantine due to close contact with those who tested positive. Assisting with the deliveries were Rubenstein and members of the cadet S7 staff, who are in charge of morale, welfare, and recreation.

“It was kind of like chasing a moving target,” said Wiemann of the package delivery process. “We had to take the attitude, ‘Okay, roll with it. You have to roll with it and get it done.’”

Included in each package was a raffle ticket. The raffle tickets, Wiemann explained, are put into a hopper and one ticket is drawn at Taps each evening. The winner gets a gift certificate from a local business for a treat such as a pizza or milkshake and delivery to barracks is included.

“We wanted to keep the fun going,” explained Wiemann. “Keep it super easy and keep the fun.”

Hoyer, the woman who’d had the care package idea in the first place, said that the cancellation of Parents Weekend had caused her to think outside the box.

“A lot of things got canceled for these [cadets], particularly for the rats,” she commented. “We want to keep the spirit of VMI going.”