Benjamin F. Ficklin, VMI Class of 1849 and one of the founders of the Pony Express, and an inscribed photograph of Astronaut John Glenn. - Photos courtesy of VMI Archives

LEXINGTON, Va., Oct. 9, 2020—With items in its collection ranging from photographs taken in the mid-19th century to an account of the construction of the Panama Canal and even letters by two founding fathers of the United States, one of them a U.S. president, the VMI Archives offers a treasure trove of history spread out over four centuries.

As part of American Archives Month, observed annually in October, VMI is featuring some interesting and unusual items in the Archives collection, as a way of highlighting both the breadth and depth of the collection, much of which is available online. After all, who’d have guessed that although VMI didn’t begin operations until 1839, there’s a letter written by Revolutionary War hero Maj. Gen. Henry Lee III, better known as “Light Horse Harry” Lee, in 1779?

Other surprises in the Archives collection include letters from the nation’s third president, Thomas Jefferson, to Claudius Crozet, a member of VMI’s first Board of Visitors, about the founding of the University of Virginia. There are letters and photographs from alumni who served in all of our nation’s wars from the Mexican-American War to the war on terrorism, plus photographs of cadets, alumni, and visitors to post over the years.

Some are household names, such as the legendary astronaut John Glenn, the first American to orbit the Earth, who spoke at the Institute’s graduation ceremony in 1965. Others are less well-known but played an instrumental role in their day—for example, there’s Benjamin Ficklin, VMI Class of 1849, who was one of the founders of the Pony Express.

Currently, the Archives’ home on the 4th floor of Preston Library is still under construction as the library undergoes its first renovation in nearly 25 years. In November, the Archives is expected to reopen to the VMI community, with a space that’s approximately 30 percent larger and also closer to the elevator, which will be helpful for visitors with mobility issues.

“It’s improved,” said Maj. Jeff Kozak, head of archives and records management, in discussing the Archives’ new space. “When you came into the Archives before, there was one long table. Now, there’s three separate tables.” 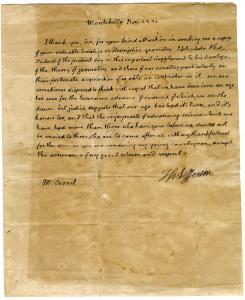 Kozak said that having more space will be helpful because he encourages professors to bring their classes to the Archives to do research. An expanded square footage is also needed because with each year that passes, the volume of cadet records stored in the Archives grows.

“Every year, we’re getting from the registrar’s office new records, cadet records that come over,” said Kozak. “There’s a 20-year lag on that, so this year we’ll get the Class of 2000’s.”

VMI has records for all cadets who’ve ever attended the Institute, but to keep those records safe from prying eyes, there’s an 80-year moratorium on viewing them, unless there’s proof that the alumnus or alumna has died. The 80-year clock starts running upon graduation.

“Those historic files—there’s a lot of interest in those from a genealogical standpoint,” Kozak commented.

And while it might be easy to think that the Archives is a dry, stuffy place for serious researchers only, Kozak was quick to dispel that notion by saying that a few years ago, a Summer Transition Program (STP) class came to the Archives to learn how VMI had wound up with the kangaroo as its mascot.

“Typically, there’s this perception that Archives has to be very serious and formal,” said Kozak. “You are studying big, scholarly things. But really, anyone who’s curious about VMI and its history—the Archives is there, and we work to make that information accessible and work with people.”