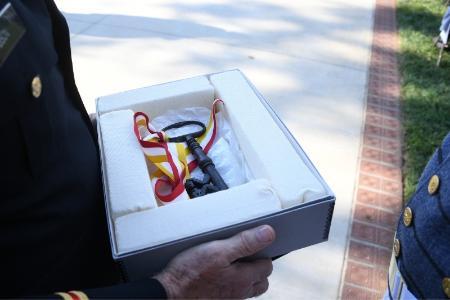 LEXINGTON, Va., Sept. 16, 2021—At the parade that marked his inauguration as VMI’s 15th superintendent on Friday, Sept. 10, Maj. Gen. Cedric T. Wins ’85 received an unusual item: a large iron key to the main door of the 1816 state arsenal that preceded VMI, now ceremonially adorned with a red, white, and yellow ribbon.

While the key has been around since the early 19th century, the tradition of presenting it to an incoming superintendent didn’t begin until Maj. Gen. John W. Knapp ’54 was inaugurated in 1989. Former superintendents Lt. Gen. Josiah Bunting III ’63 and Gen. J.H. Binford Peay III ’62 likewise received the key at their inaugural ceremonies.

And while Wins is the fourth superintendent to have received the key, Gibson pointed out that the Institute’s first superintendent, Gen. Francis H. Smith, would not only have had the key but would have used it in the early years of his superintendency to unlock the main door of the arsenal, as that building, which was burned in Hunter’s raid in 1864, was the Institute’s main building until Old Barracks was constructed in 1851.

The key to the arsenal’s main door is usually kept in a shadow box in the superintendent’s office. “It’s a real conversation piece,” said Gibson.

Eight additional, smaller arsenal keys are on display in the VMI Museum, along with a piece of one of the arsenal locks.