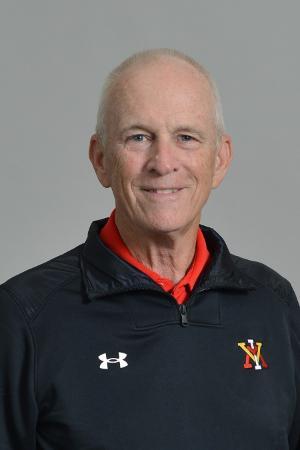 Lexington, Va., Sept. 29, 2021 – Maj. Gen. Cedric T. Wins ’85 has appointed Jim Miller to serve as the Virginia Military Institute’s Interim Director of Intercollegiate Athletics. Miller retired in 2014 as the athletic director at the University of Richmond and has more than 30 years of experience working in NCAA athletics including a stint as an assistant basketball coach at VMI (1979 - 1982).

“I’m excited to welcome Jim Miller back to VMI,” said Maj. Gen. Wins, VMI’s 15th superintendent. “Jim is largely responsible for recruiting me to play basketball at VMI. I know firsthand that he can compete and win at the highest levels. That’s exactly the type of leadership that we want leading our coaches and cadet-athletes.”

Miller spent 12 years as athletic director at the University of Richmond. During that time, the Spiders won an FCS national championship in football, had three NCAA appearances in men’s basketball including a trip to the Sweet 16, and captured 44 conference titles among 12 sports. As athletic director, he was an advocate for student-athletes, an effective fundraiser, and a strong proponent of the fan experience.

Maj. Gen. Wins has asked Miller to conduct an initial assessment of the VMI athletic experience within the context of Wins’ One Corps. One VMI. unifying action plan.

“I am honored to answer Maj. Gen. Wins’ call to serve VMI,” Miller said. “I thoroughly enjoyed my time at VMI and look forward to contributing to moving VMI Athletics forward. There’s no doubt in my mind that VMI can compete and win in every sport on a regular basis. My job will be to determine what obstacles and opportunities exist to get us to that point.”

Miller will begin his role as interim athletic director on Oct. 1, 2021.