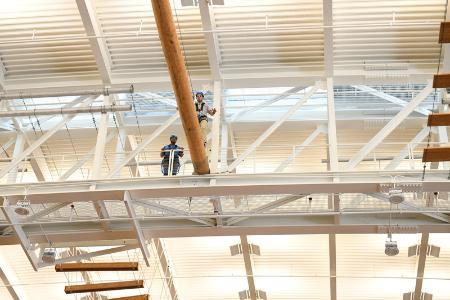 A COW participant gets encouragement from a friend as he crosses the indoor high ropes course in the VMI Corps Physical Training Facility.—VMI Photo by Marianne Hause.

COW is a four-week program that offers education, leadership and character building, and physical training at no cost to the students. This year, the participants came from seven states, and the District of Columbia. Nine are rising high school seniors, nine are rising juniors, and seven are rising sophomores.

A Cadet’s Dream
COW is the dream child of Eugene Williams ’74, who is the founder and executive director. Williams was in the third class of African American cadets at VMI. Early in his VMI experience, Williams realized that many high school aged males could benefit from the VMI style of training, even if they could not meet the requirements to become a VMI cadet. He did not have a name for his vision, nor did he know what form it would take until years later. “I was blessed to be able to come to VMI, not just for the excellent academic education, but to experience the leadership and character building, as well as the discipline and camaraderie that comes with the physical training. I knew guys in my hometown who could have benefitted from the training I was getting. If only for a short time, this type of teaching and guidance would have made a huge difference in the direction their lives were headed,” said Williams.

Four years after graduating from VMI, Williams became the first African American appointed by the governor to the VMI Board of Visitors. He was in a better position to make his dream become a reality.

“So many people at VMI helped bring COW to fruition. The first year, in 1987, we only had 12 kids, which was a manageable number,” said Williams. “Now we have family legacies. In 2019, we had the son of a COW grad, and we had brothers from another COW grad from Alabama.”

Make Them Mad, Make Them Scared, Make Them Tired
Williams stressed that COW is not a summer camp, but a transformational experience. “We take these kids who have promise and potential, but have failed to achieve their potential, and push them out of their comfort zone,” explained Williams. “We make them mad, scared, and tired. Why? Because the world is going to make them mad, scared, and tired, and they will still need to get the job done. They need to know how to react appropriately to any given circumstance.” He continued, “We all need to be coached, encouraged, and supported to reach our max. This is a safe environment, and they are protected here, but they are being challenged. They must be pushed to go beyond what they think is their limit. We don’t expect perfection, but we do expect perfect effort.”

To illustrate pushing the limit, Williams described an optional physical training activity he calls “Eat the Bear.” “Twice a week, at 6 a.m., before breakfast, we run, and we run hard. At a point during the run, you get tired, and it feels like something has jumped on your back to slow you down. That’s what I call ‘the bear.’ I tell the kids not to give in to the bear and quit running, but eat the bear and keep going. It is hard, but life is hard, and these kids are going to face so many challenges in life, they need to know they can handle anything life throws them,” said Williams.

More Than Physical Training
The COW program includes classes in addition to the physical training. Participants attend daily classes in mathematics and English. They also learn CPR, public speaking, and financial literacy, and career exploration. They read books written by guest speakers such as Gen. J.R. Gorham, the first black brigadier general of the North Carolina National Guard, who spent several class sessions with the participants, engaging them in discussions about life choices.

The participants enjoyed fun activities such as kayaking down the Maury River, canoeing on the James River, camping, swimming, going on field trips to farms and museums, picnicking, and going to movies and restaurants.

Results
Over the life of the program, approximately 75% of participants go on to attend college. The other 25% have attended trade schools, entered the military, or worked in other civilian pursuits.

Interested students submit an application for the program that includes an essay, and an agreement to “pay it forward,” meaning they will do acts of service in the future to repay the generosity shown to them through the program. There is no charge to the students selected to the program, since in most cases, neither the participant nor his family have the resources to cover the costs. It is a fundamental tenet of the COW program, which is a 501(c)(3) nonprofit, that lack of economic resources should not prevent a deserving student from participating. All funds to cover the costs of the program are raised by private donations or through the annual signature fundraising event, the COW Golf Classic, at the Country Club of Virginia in Richmond. For more information, or to donate, visit the website www.cow4life.org.