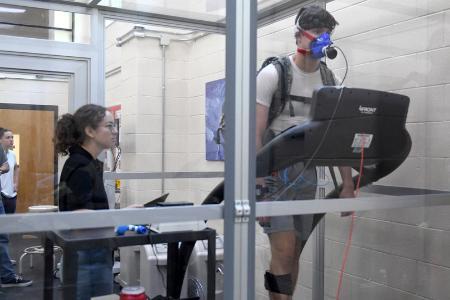 Beverley Buchanan ’23 monitors data outside hypoxic chamber as Abaigeal Doody ’23 observes male subject inside the chamber, during their research on stress at VMI. -VMI Photo by Marianne Hause.

LEXINGTON, Va., July 18, 2022—Hiking up a mountain can be a lot of fun, and the view from the top is both a delight to the eyes and to the soul. It is also a great form of exercise. Add a heavy rucksack to a hiker’s back, and the hike can become a strenuous workout for the heart and lungs. Two cadets majoring in biology at Virginia Military Institute, are exploring the subject in their Summer Undergraduate Research Institute (SURI) projects: “Effects of Simulated Altitudes and Load Carriage on Cardiac Output” by Abaigeal Doody ’23, and “The Effects of Heavy Load Carriage and Simulated Altitude on Ventilatory Physiology” by Beverley Buchanan ’23.

Explained by Doody, the heart functions as a pump to supply the body with blood enriched with oxygen. When the heart contracts and all the blood in the ventricles is ejected, the amount of blood pumped during one beat is known as stroke volume (SV). The number of times a heart beats per minute is known as heart rate (HR). Cardiac output is the total volume of blood pumped by the ventricles per minute, the product of HR and SV. “Heart rate is an important indicator of cardiovascular stress and strain. During exercise, the heart rate increases in direct response to increased exercise intensity, to supply working muscles and organs with enough oxygen and nutrients to function. As exercise intensifies, HR approaches a maximum heart rate. Research has shown SV also changes to meet the demands of exercise, up to and including the point of exhaustion,” said Doody.

High altitude locations have low air pressure because air expands as it rises, leaving more room between gas molecules. This decreased air pressure means there is less oxygen available for breathing. The lungs and the heart must work harder to supply the bloodstream with enough oxygen. This causes shortness of breath, increased heart rate, and increased blood pressure.
According to Buchanan, “The delivery of oxygen to the muscles during intense exercise begins with the movement of air into and out of the lungs - breathing. Carrying a heavy load, a common task for soldiers, is known to add to the difficulty of breathing. As the heart and lungs work together to deliver oxygenated blood to the muscles, it is possible that the heart must overwork during such challenging conditions, causing important implications for soldiers engaged on the battlefield.”

The research involves healthy male subjects who will be tested on six separate occasions, having to perform exercise tests in the hypoxic chamber, which simulates a high-altitude environment. First a baseline for oxygen consumption will be established through three exercise tests. The first test will be without weight (unloaded) with normal oxygen levels. The second test with be with a 65-pound rucksack (loaded). The third test with be loaded under hypoxic conditions of 12,000 feet.
After those three tests have been completed, three walking tests will be done for comparison, with varying weight loads, speeds, and oxygen levels.

“The military does not stop when they reach high altitudes or when they need to carry everything on their backs, so results of the study will provide more insight into the effects carrying a heavy load at high altitudes has on the body’s ability to get oxygen to the muscles and all other vital organs. The effects of load carriage at altitude on cardiac output are mostly unknown. By furthering our understanding of altitude and load carriage on cardiac output, we can begin to further understand how to help make it easier on the body,” said Doody.

The cadets’ advisors on the project, Maj. Dan Baur, assistant professor in human performance and wellness (formerly known as physical education), and Capt. Katie Baur, instructor in human performance and wellness, have been pleased with the research. “Buchanan and Doody have assisted me with research at various points over the last year, and I’ve been lucky to have them. They have worked hard, and I believe their efforts will result in data that they can present at a national conference and publish in a prominent journal. Their project will likely have important implications for the health and performance of soldiers, and both understand and value their role is producing knowledge that may someday support their peers who serve,” said Dan.

Katie added, “Buchanan and Doody have each embraced their individual roles in the research process and take their responsibilities seriously. They work well alongside one another and ask questions that exemplify their interest and understanding of our larger research question.

Doody is from Ladera Ranch, California, where she attended Tesoro High School. After graduation, she plans to go to graduate school where she will pursue a degree in physical therapy.

Buchanan is from Richmond, Virginia where she attended Open High School. After graduation, she plans to go to graduate school where she will study sports medicine or pharmacy.