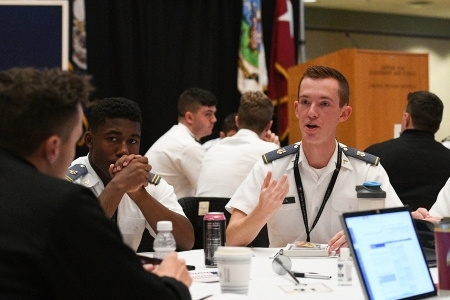 Cadets participated in roundtable discussions during the conference.—VMI Photo by H. Lockwood McLaughlin.

LEXINGTON, Va., Nov. 3, 2021—The 12th annual VMI Leadership and Ethics Conference, “Evolving Civic Leadership: Citizenship and Social Responsibility,” held Monday, Nov. 1, and Tuesday, Nov. 2, in Marshall Hall, brought more than 160 participants and several universities from across the nation to the table to talk about current hot-button topics and hear from inspirational speakers. Participants learned how important active citizen leadership is to the health of our American republic.

Central to the conference’s programming were small group discussions and speakers focusing on the aspirational notion of active citizenship and social responsibility, beginning with our national founding documents, the Declaration of Independence and the U.S. Constitution. The conference programming advocated that the individuals in our audience are each citizen leaders with the potential to create change on the smallest to largest levels.

Registrants included VMI cadets, students from other senior military colleges as well as traditional colleges, VMI alumni, and other interested individuals. Maj. Gen. Cedric T. Wins ’85 welcomed attendees on Monday morning and emphasized how nice it is to be back to a face-to-face conference after pivoting to a virtual platform during coronavirus pandemic restrictions last academic year.

“VMI is an exceptional place to have this conversation and glean insights into active citizenship and civic leadership," Wins said.

The first guest speaker the audience heard from was Amy Chua, a Yale law professor and author of the book, “Political Tribes: Group Instinct and the Fate of Nations.” She is a daughter of two immigrants and used her time during the conference to dive into why the United States is so "bitterly divided," and how the future leaders of America in the audience might overcome this.

"Partisanship has become toxic," she said as she kicked off her talk. Research shows that humans, even as small children, like to be part of groups and are driven to defend their groups.  The problem is when tribalism takes over political systems because it becomes the lens through which everything counts, where facts and policies don't matter.

Chua says several factors are causing the divisions: massive demographic transformation; social media; and the rise of the divide in America between coastal elites and the middle Americans or working class.

She, an optimist, says maybe things aren't so bad. By recognizing what makes America special is how we can move forward in reunifying efforts. She and the other speakers pointed out that America’s unique bond comes from a commitment to a certain creed, ideas, and words; particularly those in our country’s founding documents rather than race, religion, or ethnicity. For this reason, every member of the audience was given a pocket U.S. Constitution.

Later in the morning, John Wood Jr., national ambassador for Braver Angels, an organization dedicated to helping Americans overcome political polarization, spoke to attendees, whom he greeted as his "fellow Americans." He mentioned that this term is used so freely, especially in political environments.

Wood, who is biracial, explained the vastly different backgrounds of his parents who each showed him "different narratives of American existence," providing him a wealth of views and perspectives from different branches of his family.

Wood’s wife is a military veteran. In speaking to an audience, a majority of whom are exploring military futures, he said, "The institution of the United States military, at its best, provides a framework in which we can harness the deeper sorts of values and commitments that we share as Americans, extending beyond the differences in our identity in a way that gives us common cause and a common mission, and allows us to transcend the things that are so bitterly dividing the American people at this moment."

He asked the audience members to reevaluate what they each can offer American society. The missions don't always go as expected, but that doesn't mean anyone should lose confidence, integrity, or moral character. "The best argument is done by example."

With Braver Angels’ facilitators on-site to guide them, participants in the Leadership Conference then debated cadet-selected controversial topics. The topics included COVID-19 vaccine mandates, the U.S. military intervening in foreign countries, transgender athletes, and social media content regulations. The four breakout groups found creative ways to report out their groups’ findings during the conference, some using video, while others created skits, to show the different ways debates can be handled civilly and educationally.

The first day ended with dinner speaker, Eric Liu, founder of Citizen University, whose mission is to build a culture of powerful, responsible citizenship in cities across the country. Liu, like the other speakers, confirmed we are in a culture where people have many different viewpoints and political perspectives and asked “How, as a nation, do we close the gap between our creed and our deeds?”

Citizenship is something that must be cultivated, and we must take personal responsibility when we want to see change or leadership. According to Liu, citizenship happens when we are fluent in the proper use of power and develop our collective civic character to organize and engage.

“We own responsibility for the good, the bad, and ugly, the past, the present, and the future,” Liu said.

On the second day of the conference, William McNulty, a Marine veteran and founder of Team Rubicon, a group that trains veterans to respond to natural disasters spoke to the crowd. Team Rubicon came about from a group of eight individuals who used their military experience to organize and respond to the 2010 earthquake in Haiti in just 24 hours. Now Team Rubicon Global has more than 100,000 members with units in Australia, Canada, Norway, and the United Kingdom, in addition to the United States. About 75% of those involved in Team Rubicon are veterans. The organization has garnered support from four U.S. presidents and members have even worked side-by-side with Prince Harry.

McNulty learned valuable lessons along the way which helped him, and his team focus their company’s mission and operations toward more internal objectives which help veterans, such as providing a sense of purpose, a sense of community, and a sense of identity. McNulty helped the audience understand the high of responding to crisis events and how continual exposure to such working environments can trigger a kind of addiction response that can be dangerous, as was the case with a friend whom they met on their first mission, a veteran named Clay. Clay discovered Team Rubicon online and sought them out during their efforts in Haiti. Noted McNulty, “Daily, 22 veterans commit suicide. In 2011, Clay was one of them.” McNulty said Clay taught him that “friends don’t let friends go through terrible things alone.” McNulty went on to say, “Clay’s message is to show up for one another. Find a purpose you’d navigate an earthquake for.”

His remarks were followed by a panel discussion featuring alumni who demonstrated civic engagement in action. The group, along with others, initiated collaborative efforts to enhance  diversity, equity, and inclusion at VMI. Moderating the panel was Lt. Col. Jamica Love, the Institute’s chief diversity officer. Lester Johnson '95, Sean Lanier '94, and Keniya Lee '19 talked about what it means to be involved with the Institute after graduation, what it was like reading about VMI in the news so much in the last year, and how important it is to have empathy during cadetship and afterward. Speaking on his own behalf, Johnson, who is a member of VMI's Board of Visitors like Lanier, said that, as a society, we "need to expand our ability to have empathy." 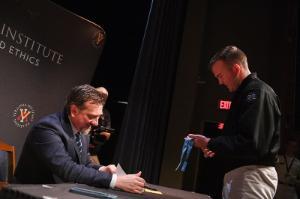 The conference’s final speaker was Staff Sgt. David Bellavia, the only living Medal of Honor recipient from Operation Iraqi Freedom. Bellavia brought humor and passion to his remarks and encouraged cadets and other audience members not to be afraid of failure, or of being awkward and uncomfortable. Gillis Theater was nearly full, with his speech open to the public, as he emphasized knowing one’s own personal identity and purpose. “If you know who you are, no one can take that away from you – no matter what they say to you or about you, because no one can take away from you what you are.” Accountability, consistency, love, and loyalty were the values he emphasized.

Col. Dave Gray, director for VMI's Center for Leadership and Ethics, felt proud of this year’s conference and his team's efforts, saying, “Each speaker and each interactive activity we designed into this conference brought depth and a variety of perspectives on how to view what it means to be a citizen-leader. The feedback we received from the conference participants has been very positive. We hope that they will continue to discuss and reflect on this conference for quite some time to come.”

Next year’s Leadership Conference will be held on Oct. 30 – Nov. 1, 2022 with an announcement of the theme and title coming in the spring. To stay informed, please visit the conference website and join the mailing list.