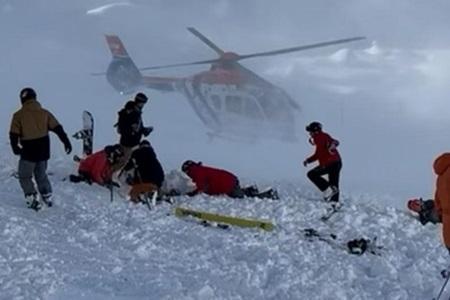 LEXINGTON, Va., Jan. 17, 2023—When Erik Gottmann ’25, a cadet at Virginia Military Institute boarded a flight to Austria for a ski trip with his family over winter furlough, he had no way of knowing he and his brothers would be an essential part of a Christmas miracle.

The family, who reside in Malta, New York, arrived for their first day of skiing in the village of Zürs in the Austrian Alps on Christmas Day. Erik, along with his two brothers, Troy, a 17-year-old high school senior and Hans, a 15-year-old high school sophomore, have been skiing since they were toddlers, and are considered to be experts. “We have been to that same ski slope twice before and know it fairly well. My brothers, a family friend, and I spent most of the day skiing the trails, which are quite long and challenging, since the mountain is massive. My father was skiing in a less ambitious area, and my mom was in the lodge,” explained Erik.

The four stopped to rest, enjoy the view, and take some pictures when Hans first saw the avalanche and pointed it out to the others. “I thought he was joking at first, then I saw it too, and quickly got my phone out of my pocket and began to video. Even from the distance where we were standing, we could see the snow covering up people. As soon as the avalanche stopped, we decided to ski over to help the people trapped.

“The first person we found was a German man who was buried in the snow up to his neck. We dropped down on our hands and knees, and used our hands to dig him out of the snow. He was speaking German, and I know a little of the language, so I was able to understand that he injured his shoulder, but I didn’t understand much more than that. Once we uncovered him, we scrambled up the hill to try to find others.

“The ski patrol soon arrived and asked to see our videos to determine how many people had been covered by the snow. They ascertained there were ten. Additional ski slope employees including lift operators, instructors, and maintenance crew, joined the rescue effort. Small shovels were distributed, so we no longer had to dig with our hands. They told us to look for skis and ski poles sticking up out of the snow, and to dig wherever we found them, since people were most likely nearby.

“Shortly after that, rescue helicopters arrived. There were so many coming and going, I lost count, but there were at least ten. They were lowering paramedics and rescue equipment. They prepared to airlift the first victim we uncovered and instructed my brothers and myself to wrap the man with a metallic survival blanket to keep him warm. As we were doing that, he told us that he couldn't feel his legs. At that point, the paramedics took over his care, and we went back to digging for others,” said Erik.

The four young men continued to dig for an additional 45 minutes. By then, enough police and other professionals arrived to complete the search effort. Long poles were used to probe the snow, but fortunately no bodies were found.  The entire rescue lasted less than three hours. “Clearly these people have been trained for avalanches and know exactly what to do,” said Erik.

He and his brothers were able to talk with several of the survivors after they were rescued. Miraculously, the majority had only minor injuries. The most seriously injured was the German man, who was flown to the hospital.

“Ironically on that very morning, the ski resort had used dynamite to try to loosen the snow in that particular section, since the temperature had risen slightly. But the snow didn't slide at all, so they thought it was safe,” noted Erik.

Confirmation that all the victims had been successfully rescued came in the form of church bells in the town of Stuben, where the Gottmanns were staying, just south of ski resort in Zürs. “The ritual of ringing the church bells three times signals to everyone in the village that all were safely found. But to hear them on Christmas evening was extra special. They chimed for our Christmas miracle,” Erik mused.

Maj. Gen. Cedric T. Wins ’85, VMI’s superintendent was amazed, but not surprised when he heard of the report. “VMI is no ordinary college experience. Each and every day at VMI, our cadets choose selfless service, courage, and honor in stark contrast to other school experiences, So it comes as no surprise that Cadet Gottmann chose to put the needs of others over his own. His actions in Austria perfectly exemplify the values of a Virginia Military Institute cadet.” stated Wins.

Erik majors in civil engineering at VMI. He plays mid-field on the Keydet lacrosse team and plans to commission into the Army upon graduation.