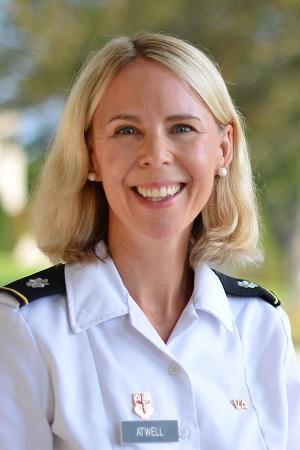 VCCA, a nonprofit organization established in 1971, is a place that encourages writers, visual artists, and musical composers by providing them with individual studio space to work, a private bedroom, and three prepared meals a day so they can focus exclusively on their work. While uninterrupted time is assured, evening interaction among the fellows in residence is an important component of creativity. VCCA is located on the grounds of Mt. San Angelo, formerly owned by Sweet Briar College. The property includes a 13,000 square-foot 1930s Normandy-style dairy barn that has been renovated as artists’ studios.

Atwell said she had done writer residencies in the past, but now being a mother of three school-aged children, wanted to stay closer to home. “Since VCCA is so close, I saw the possibility. I applied last January, and was accepted in May. I was able to go during my faculty development leave in November,” she said. In addition to being secluded and away from distractions, Atwell also enjoyed the benefit of being surrounded by other writers, composers, and artists. “I love visual art, but I don't have that talent. It was so inspiring to be around it. Every evening we'd have what they called ‘open studios,’ where various artists would just invite you into their studios, show you their work and talk about it. The writers would do readings, and the composers would share their music. It was such a generative atmosphere to be around other artists.”

Atwell who uses the pen name of Polly Stewart for her second novel, “The Good Ones,” shared that the book is a mystery. “It's about a woman who returns to her small hometown in Virginia. One of her close friends had disappeared 15 years earlier, and the woman begins dating her friend’s former husband. She gets involved in the community again, and then a lot of secrets come out,” she explained. During her time at VCCA, Atwell was able to put final edits on “The Good Ones,” which is scheduled to be released in June. Her publisher is Harper Books at HarperCollins in New York, and she hopes to schedule book signings in Lexington.

While at VCCA, Atwell was also able to work on her latest novel, “Little Joy,” also a mystery which takes place in Virginia. “‘Little Joy’ is about a couple who founded an artist's residency, though it’s not based on a real place.  The couple is found murdered, and the story goes into their friends’ lives and their daughter's life,” explained Atwell.

Atwell earned her Ph.D. in 19th century British literature, so her fondness for crime fiction has a long past going back to writers like Charles Dickens and Wilkie Collins. “I grew up reading my mother’s mysteries, Agatha Christie, Colin Dexter, Dorothy Sayers. I love mysteries and it’s a great way to generate narrative,” she said.

An exceptionally disciplined writer, Atwell begins each day at 4 a.m. and writes for three hours.  “I had a high school teacher who told me I should write every day, and I was an obedient student. I've done it ever since,” she shared. At 7 a.m., she gets her children ready for school, and sets off to teach at VMI. “I'm teaching an 8 o’clock class this semester, so I might have to get up a little earlier.”

Although VCCA residency fellowships are very competitive, and many applications are declined, Atwell recommends the benefit of uninterrupted work time to others who find distractions at home. “At home, there is always something to do, but at VCCA, there were no disruptions. I'd go to my studio at 5:30 a.m. and I wouldn't really break for the day until about 5 p.m. I could never do that ordinarily,” she said.

Find additional information about the Virginia Center for the Creative Arts (VCCA) and ways to apply for a residency fellowship on their homepage.