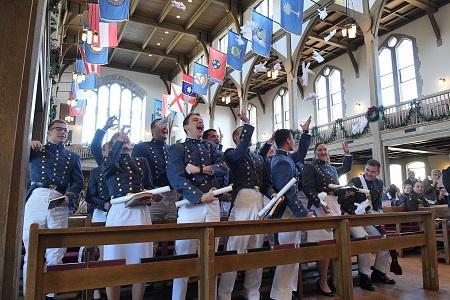 VMI graduates celebrate by tossing their gloves in the air after receiving their diplomas.-VMI Photo by Kelly Nye.

LEXINGTON, Va., Dec. 21, 2022—The day was sunny and brisk on Dec. 21 as 22 Virginia Military Institute cadets crossed the stage in Memorial Hall to receive their diplomas during the commencement ceremony.

Maj. Gen. Cedric T. Wins ’85, superintendent, welcomed all in attendance to the “much colder-than-May” and more intimate December graduation. He noted that VMI graduation dates have varied throughout history, originally coinciding with the July 4th Independence Day celebration, and during the 1940s, were held as early as February. But he assured the graduates, “It doesn’t matter the season or your tenure at VMI. What matters is each of you finished the arduous, demanding journey you started.” Wins told the cadets that this was the last time he would be addressing them as cadets, saying “from this point forward, you are fellow alumni,” and encouraged them to leave the Institute with the lessons they have learned on post: honor, teamwork, discipline, and friendship. “Stay in touch and return as often as you can as you are forever welcome here on post.”

Wins introduced the commencement speaker, Gussie Lord ’01, who was part of the first co-educational class to matriculate in 1997, and who graduated from VMI with a degree in English, with distinction, and is now a member of the VMI Board of Visitors.

Lord opened her remarks by reminiscing about the first time she and her parents saw VMI when arriving for Summer Transition Program (STP). They drove from their home in Michigan, which was a 16-hour drive spanned over two days. “When we came into Lexington, we came down Route 11, under the walking bridge that says Virginia Military Institute. We turned right onto Letcher Avenue, and as we were coming up the hill, on the left, we saw these green lawns and red brick buildings with white columns. People were laying in the grass reading, and my mom said, ‘Oh, Gussie, this is beautiful!’  And I was getting kind of excited and I’m like, ‘yeah, this is nice,’ but it sort of dawns on me, wait a minute, this doesn’t really look like any of the pictures I saw. And then we came up the hill and across the parade deck, there’s barracks.  Looking like a castle, or a prison.  And my dad said, ‘No,’ as he points over the steering wheel, ‘that’s where you’re going to school,’” she mused.

After the audience laughter subsided, she continued by sharing her excitement and nervousness, as well as her parents’ apprehension with leaving her on post, and understanding that most parents feel the same way. She thanked the ones in attendance for placing their faith in VMI and for entrusting their children to a school that imposes physical and mental challenges. Addressing the cadets she said, “The truth is, VMI is very effective. Your experiences here will not easily be forgotten. The relationships you formed, the experiences you’ve shared, will endure. They will always be a part of your story. VMI, through the adversative method of education, strives to produce men and women who are fit to lead. So, when you are called upon to lead, and when things get difficult, I urge you to reach back to the lessons and skills you learned in this place.”

She continued by stating that those commissioning into military service will step into leadership as a new officer, but those entering civilian life may step into a role with no authority at all.  “You can be a leader regardless. You don’t have to have authority over others in order to lead. You can lead by example, and through service – by seeing what needs to be done and taking the initiative to do it. You can lead by showing up on time, giving your best effort, and taking pride in your work. You can lead by having integrity, by owning up to your mistakes, and by treating others with kindness and compassion,” she said.

Lord warned the graduates not to define themselves by either their failures or their successes.  “There is a danger in letting our failures become too big in our own minds. They can weigh us down, hold us back, suppress our confidence, and create fear. But there also is a danger in defining ourselves by our successes. It is tempting to do that – to point to accomplishments, or money, or awards, or recognition, as proof of a life well-lived. But often, success is born from luck, born from circumstances that were in place long before we had anything to do with them, and success almost always involves many people working together, not just one person,” she said. Instead, she urged them to learn from each experience, to discover what could have been done better, what relationships were formed, and what stories arose that can be told. “As VMI graduates, I believe, in many respects, you have an advantage over your peers. You have identified your capacity to persevere, and to be resilient. You understand what it means to lead, what it means to succeed and to fail while others are watching,” she said.

Lord concluded by advising the graduates to be open to change, which is often painful and scary, but necessary for growth. “If the path seems uncertain, take comfort in knowing that every generation has faced unprecedented issues, every generation has brought change. There also are things for you to hold onto: your values, your integrity, your faith, your resilience, and your loved ones. For generations, the principles VMI has endeavored to instill in her cadets – honor, discipline, service above self, have remained. Though we live in interesting times, I believe if you hold fast to those principles they will serve you well, as they have served those who have gone before. Congratulations. Rah Virginia Mil.”

Lord is founder and managing attorney of the Tribal Partnerships Program at Earthjustice, a nonprofit public interest environmental law organization where she represents Indian tribes and Indigenous communities in their efforts to protect the environment and sacred sites. Prior to joining Earthjustice, Lord worked at the New Mexico Court of Appeals. She also spent several years in private practice representing tribes in environmental, administrative, and jurisdictional matters, and representing public housing authorities in efforts to expand affordable housing opportunities.

While at VMI, Lord earned monograms in cross country and track and field. She also participated in cheerleading, soccer, the Promaji Club, and served as opinion editor of The Cadet and co-editor of the Sounding Brass. Lord was a member of VMI’s first co-educational class and was a first class private. She graduated from the University of Michigan Law School in 2006.

The evening before commencement, the Joint Commissioning Ceremony was held, also in Memorial Hall, in which four graduating cadets were commissioned to the Army as second lieutenants and one to the Navy as an ensign.

Offering remarks and administering the oath of office was Maj. Gen. Bowlman “Tripp” Bowles ’87, the J9 director at the Defense Logistics Agency Headquarters in Fort Belvoir, Virginia. His previous assignment was as commanding general of the 80th Training Command (The Army School System.) A native of Richmond, Virginia, Bowles received his Bachelor of Arts degree and commission from VMI in 1987.