Coronavirus Updates - All events on Post through May 14 are cancelled, and Post is closed to the general public. More

VMI's Coronavirus Updates page is the primary vehicle of communication for cadets and their families, and for faculty and staff. You are encouraged to bookmark this website and check it throughout spring furlough and as the situation continues to evolve. Cadets are also encouraged to be signed up for emergency alerts through the VMI Mass Notification System to receive a phone call and text with emergency information. Visit the Emergency Management site to sign up. 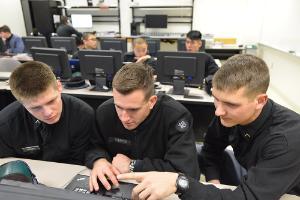 “The support provided by the Jackson-Hope Fund has been critical to developing new academic initiatives and cultivating those initiatives into flagship programs, such as the VMI Center for Undergraduate Research. The result has been a surge in our academic program that has helped us rise in several national rankings of colleges and universities, and we attribute this success in great part to the Jackson-Hope Fund’s benefactors,” said VMI Superintendent Gen. J.H. Binford Peay III ’62.

“In addition, the Jackson-Hope Fund provides 75 percent of the funds the Institute commits to faculty development, and it has enabled us to continue hiring new teachers when most colleges and universities in the nation are cutting back.”

With an endowment goal of $50 million, the Fund provides a unique source of support for especially promising academic initiatives that might otherwise languish in competition for the Institute’s resources.

Named after the Jackson-Hope Medal, the annual cadet award for the highest academic achievement, the Fund directly benefits cadets and faculty through innovative advancements in the academic program, guided by the goals and objectives set forth in VMI’s Vision 2039 and the Southern Association of Colleges and Schools (SACS) Quality Enhancement Plan.

The Jackson-Hope Fund is distinctive in that contributions are made with no specific purpose other than to support academics, and principal donors are actively involved in the process by approving the Institute’s use of the funds and monitoring performance. Since its inception in 2001, the Fund has raised close to $30 million and has provided over $15 million in grants in support of key academic initiatives. This support has been instrumental in many of the successes of VMI’s academic program.