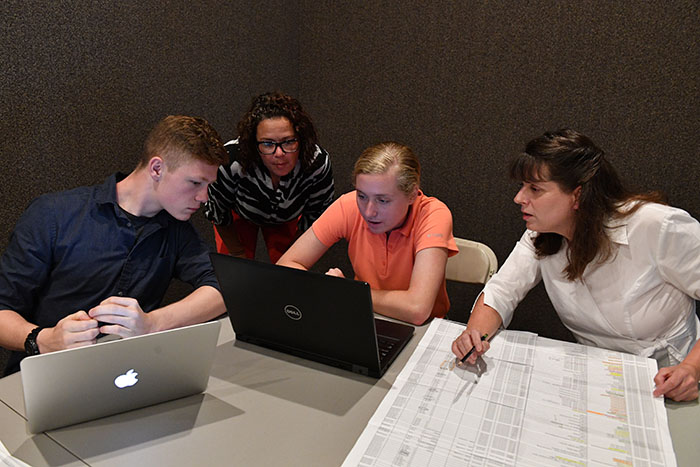 Now in its eighth year, VMI’s Applied and Industrial Mathematics (AIM) program has the goal of letting cadets practice their applied mathematics skills by helping a real-world business or organization.

This summer, five cadets got a chance to put their data analysis skills to use through that program. Two of them, Seth Gibson ’22 and Emily Gothard ’21, did their work for the Frontier Culture Museum in Staunton, Virginia, a state-supported entity that must raise 30 percent of its operating budget each year, primarily through sales of admission tickets, season passes, and merchandise in its gift shop.

Gothard explained that the first thing she and Gibson did was try to find which gift shop items were the biggest sellers so Frontier Culture Museum staff could allocate more funds towards purchasing those items.

“We looked at all of their vendors to see how much they’d spent ... so we could categorize their budget sheet,” said Gothard. “We did that in order to create the budget, and then we broke it into 17 categories.”

It didn’t take the cadets long to figure out which items turned over quickly and which ones sat on the shelf. “They spent a lot of money on books, but they aren’t big sellers,” said Gibson. In the end, the cadets found that small items appealing to children, such as fudge, pencils, and stuffed animals, were the shop’s biggest sellers.

“We’ve had some surprises as to what kinds of things are selling and what kinds of things aren’t selling,” confirmed Megan Newman, executive director of the Frontier Culture Museum and a former VMI employee. Already, she noted, the work of Gibson and Gothard has led her to see that an expansion of the gift shop isn’t a wise fiscal move.

Newman said she’s very hopeful that the relationship between VMI and the Frontier Culture Museum will continue to grow. “We have project potential for cadets galore, whether it’s through AIM or [the Summer Undergraduate Research Institute],” said Newman.

While Gibson and Gothard were working in Staunton, David Carter ’19 undertook an AIM project on post. His project was to analyze data on alumni donors and giving patterns for the VMI Alumni Association.

“I’m looking at ways [the Alumni Association] can be more cost-effective and save money while at the same time have the same level of alumni interaction and involvement,” said Carter in mid-July. 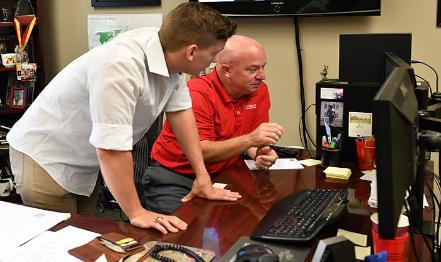 “The next goal is to create a list of all of the areas where there are alumni and no chapters, and then rank them based on what would probably be the best place to start building chapters,” said Carter, who will graduate in December and commission into the U.S. Navy.

Carter’s project will continue through the fall semester, but he’s hopeful that the work he’s begun will be kept going long after he’s graduated.

“Ideally, I’d like to create a standing program for the Alumni Association, so whenever they get new data, they could plug it in as an Excel document and it would just calculate a new list for them,” he stated.

Calling the impact of Carter’s work “tremendous,” Thom Brashears ’95, chief operating officer of the VMI Alumni Association, said that Carter had unearthed valuable information that would help the association do its job better.

“A lot of the things he’s finding we kind of expected, but there have been a few surprises,” noted Brashears. “If we want to improve, if we want to have a better strategic vision, we’ve got to be able to point to facts rather than just guess all of the time. This was a way to do that.”

Since its inception, AIM has been organized by Lt. Col. John David, associate professor of applied mathematics, who had run similar programs at three other colleges and universities before coming to VMI. Right away, he knew he wanted to make cadets aware that applied mathematics wasn’t just a buzz word.

“That was my goal when I became a tenure-track professor at VMI … I saw a huge need for getting cadets integrated with businesses,” David commented. “There’s a lot of great projects you can do that are very academically interesting. I want them to be able to solve concrete problems.”

In addition to Gibson, Gothard, and Carter, other cadets working on AIM projects this summer were Johnny Vesterman ’21 and Kaleb Tucker ’20. Vesterman worked with David and Col. Atin Basuchoudhary, professor of economics and business, to develop statistical applications for predicting civil conflict, while Tucker worked with Laser Tag Source, a company that rents laser tag equipment, to help them learn more about their client base.