Research conducted by Joshua Farr '23 and Michael Lawrence '23 under the guidance of Lt. Col. Pennie Ticen and Maj. Jeff Kozak.

‘The Early Years’ is interpreted as the period covering the conversion of the State Arsenal into what is now Virginia Military Institute (VMI), founded November 11, 1839, all of the way to the beginning of the Civil War. The timeline runs from the late 1830s until the late 1850s. Most of the material that was found had been transcribed, so it was easier to read, and it was not the handwritten cursive of the original documents. This site covers: the conversion of the State Arsenal into VMI and the physical layout of the grounds, Board of Visitor (BOV) minutes in regards to the establishment of VMI, early academics, and what Cadet Life was like and the struggles cadets had with Thomas ‘Stonewall’ Jackson when he has a professor at the Institute.

At the time of the arsenal’s conversion, the Institute looked much different than it does today. In the beginning there were only a few buildings on Post. The oldest building, Old Post Hospital, today houses the Chaplains Office and the International Programs office. The Old Barracks was the first barracks to be built on post – it was not only cadet housing, but it also held classrooms in the beginning. Today, should you walk down Letcher Avenue, there is a cornerstone on almost every building that has a four-digit year on it, this year signifies the beginning of the construction of that building. New Barracks was added in 1948, and finally Third Barracks in 2008. Post has changed a lot over the years, and now has many academic buildings and many new majors within them. 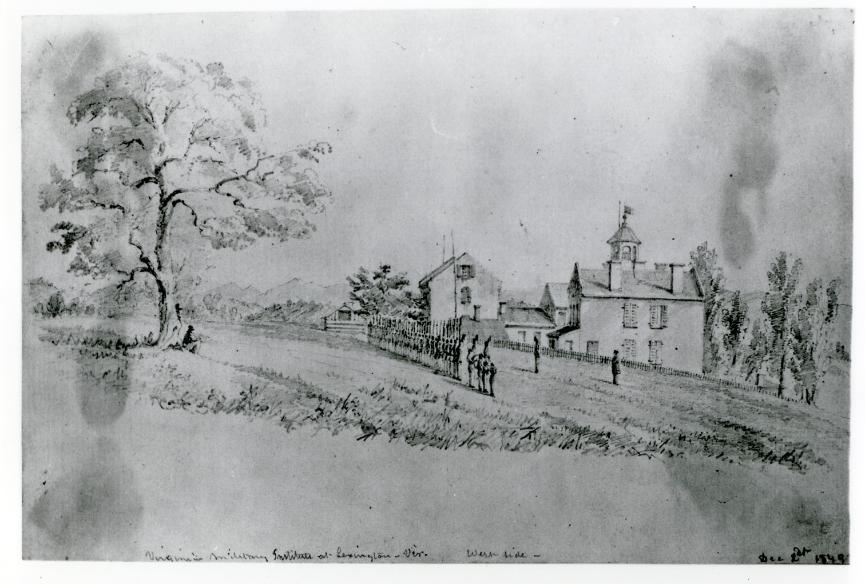 Photographic copy of the 1849 Seth Eastman drawing of the original Arsenal and Barracks, probably done from the front porch of Superintendent Francis H. Smith's 1847 residence. It shows the west side of the original arsenal building (1816) and (at right) Major William Gilham's residence. The cupola was on the center barracks building. From the VMI Archives Photographs Collection.

The arsenal in Lexington, Virginia was established in 1818 and was not converted into the Virginia Military Institute until November 1839. In 1835, John Thomas Lewis Preston, one of the founders of VMI, wrote to the Lexington Gazette under the pen name of ‘Cives’ arguing for the conversion of the arsenal into an Institute. Preston did this because he was a big advocate of educating the young men who manned the arsenal. On March 22, 1836, the Virginia Legislature passed the first Legislative act that established the Board of Visitors and laid out the job description of their Board. The Legislature would then pass two follow-up legislative acts amending changes to the first legislative act. The Virginia Military Institute opened its doors on November 11, 1839, on the same grounds that the arsenal was established on in 1818. 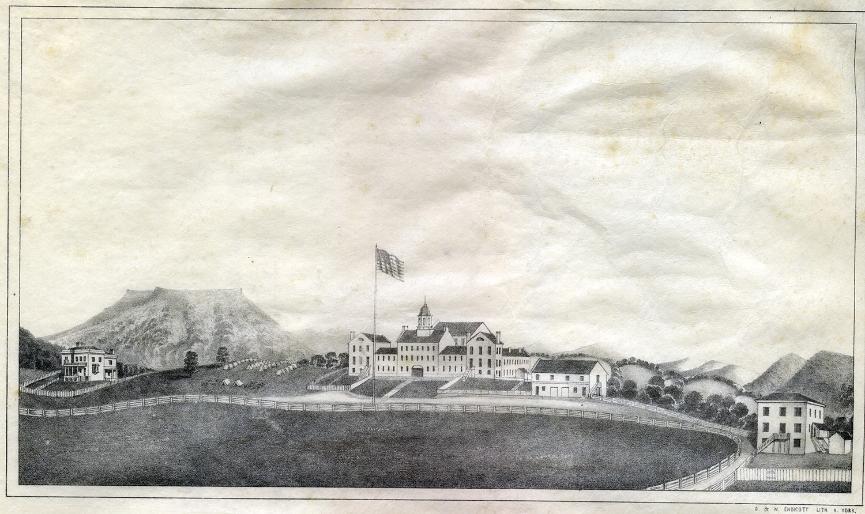 The Board of Visitors of the Virginia Military Institute meets annually, semi-annually, or as needed to make legislative changes to the Institute’s policies and to update the public on the current course of the Institute. Changes are recorded in what are called “minutes”. The BOV’s minutes are made public and are accessible through the archives website of the Virginia Military Institute. The information contained therein is mostly uneventful, however there are many instances in which the BOV provided valuable information for the research effort into VMI’s long history, specifically, the Early Years. In the minutes from September 10th-12th, 1839, the BOV finalized the purchasing of the Arsenal Grounds for $60 per acre. Additionally, the BOV requested funds to purchase weapons and uniforms that would resemble those used at West Point. This finalization was one of the first revolutionary changes from arsenal to institute.

Over time, the classes offered by the Virginia Military Institute has changed and evolved. In the beginning of the Institute, there were not majors that were offered, instead there was a general course load that every cadet took. According to the July, 1848 annual report, (linked below) “first year and in the fourth class embraces arithmetic, algebra and geometry, English grammar, geography, and the French language; for the second year and third class, algebra, geometry, analytical geometry commenced, French, drawing landscape; for the third year and second class, analytical geometry concluded, descriptive geometry, shades, shadows and perspective, surveying, differential, and integral calculus, French, Latin, drawing, topography, and linear; and for the fourth year and first-class, natural philosophy, chemistry, military, and civil engineering, tactics, infantry and artillery, Latin, English literature, rhetoric, geography and history.”

Cadets in the Early Years were able to do many of the same things as today’s cadets do, such as play games with each other, go to classes, do physical training, and get up to no good. The cadets have always been similar minded in their need to complain about teachers; one such teacher was Professor Thomas “Stonewall” Jackson. He was a professor at the Institute from 1851 until 1861 when he left for the Civil War. Many cadets referred to him as the worst professor on Post, as he had no idea how to teach, and expected too much from the cadets. One cadet named Charles Barton said in 1855, in a letter to his cousin “We commenced studying engineering this year. I find the military engineering quite interesting & I hope I may find civil equally so, as it is the only thing I care knowing anything about. The study I referred to just now was Optics, which from being so very difficult, & taught by such a hell of a fool, whose name is Jackson…” Thomas Jackson was by no means a good teacher and this was just one instance of complaint from a cadet, but many shared this idea. Cadets in the Early Years were all from Virginia and thus knew the families from which other cadets came, which is where the deep-rooted brotherhood comes from in VMI.