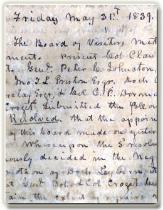 The VMI Archives is the repository for the Institute's official records of enduring historical and administrative significance. The Archives staff preserves and catalogs the non-current records of permanent value that are generated by or that document the activities of administrators, faculty, and students of the Institute. A few examples of permanent institutional records are the Minutes of the Board of Visitors; records generated by senior administrators such as the Superintendent; a host of student and official Institute publications such as catalogues, yearbooks, annual reports, and brochures; and photographs and other media. Official records are distinct from manuscripts, which are collections of personal rather than official institutional papers.

Current Institute records remain in the offices in which they are created until they are no longer needed in the course of business. At that time they become non-current, and the records of historical and administrative value are transferred to the Archives for permanent retention. Other records with short-term value are maintained for a specified period conforming to the state's records retention schedules and are then scheduled for destruction. The Archives staff also oversees the Institute's Records Management Program. 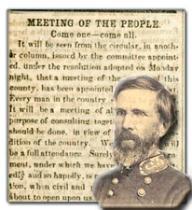 VMI's institutional records are organized using standard archival principles into Record Groups, or major organizational divisions, which are largely derived from the organizational structure of the Institute.  We hold the complete historical records of the Institute, dating to the founding of the school in 1839; there are no significant gaps. All of the important Civil War era records, for example, survived the conflict.  The list of Record Groups reflects the major administrative units at VMI, with smaller related units (subgroups) falling under the appropriate larger organizational unit.

When the Archives was formally established in the mid-1970's, VMI's organizational chart was reviewed and the major Record Groups were created and given a number. For example, records of the Institute's governing body - the Board of Visitors - became Record Group 1; the records of Office of the Superintendent, Record Group 2, and so on. This Record Groups list has since been revised and is periodically reviewed.  In addition to the Record Groups established from the organizational chart, other groups were added that related to types of records or that reflected practical filing arrangement - for example, Publications.

Finding the item you need in archived institutional records can be daunting. Record Groups can contain tens of thousands of individual documents or pages. Institutional records are not typically indexed or cataloged at the item level; rather, larger sets of files have inventories or finding aids, and the inherent logical structure of the files themselves provide guidance. For example, the Records of VMI's first Superintendent, Francis H. Smith, are voluminous, but name indexes are available. If your research topic involves official records, please contact us. Because of our experience in working with the material, we can provide the records that are most likely to yield the information you are seeking.

Some records are closed to research. Access to certain categories of records is restricted because they are covered by various federal and state statutes governing privacy and confidentiality. Examples of restricted records include student records, personnel records, and some other administrative records covered by statutory exemptions.