Research conducted by James Mills '23 and Thomas Owen '23 under the guidance of Lt. Col. Pennie Ticen and Maj. Jeff Kozak.

World War II was a time in American history that created mass change throughout the country. The war made it mandatory for Americans to participate by implementing a draft as well as encouraging other United States citizens to contribute to the war effort.During this time, military academies were being utilized for new officers. One of those academies was the Virginia Military Institute (VMI). The school experienced enormous amounts of change that were abnormal to the VMI environment. The following review, focuses on VMI’s war preparation, how cadet life continued during the war, and how cadets honored their fallen.

On December 7, 1941, VMI was alerted that the Japanese had bombed Pearl Harbor, effectively changing the lives of over seven hundred cadets. In preparation, VMI started conducting impromptu military training. The institute started to have 15-minute trial blackouts in barracks where all lights were turned off to practice and prepare for an aerial assault. In March of 1942, the entire corps took over the city of Lexington for an emergency drill exercise. The corps was divided into six different companies, each with a company commander supervising the exercise. In the same year, the class of 1942 was graduated one month ahead of schedule in order to be commissioned as active-duty officers. In the upcoming months, the Army Reserve Enlisted Corps was revised and mandated that VMI become a fully commissioning military institution. With all of these changes to the institute, VMI became more prepared and completely involved with the war effort. 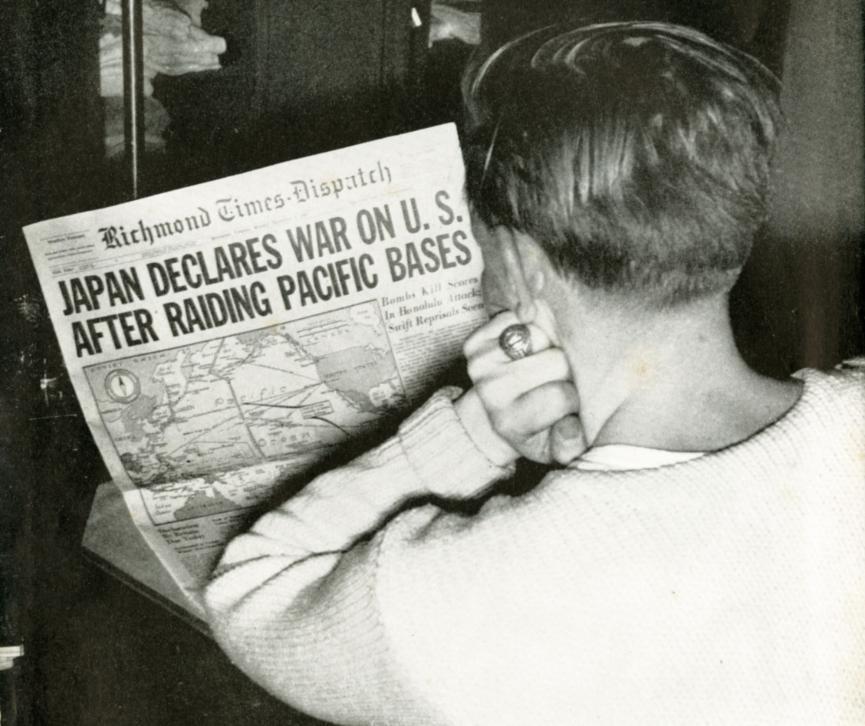 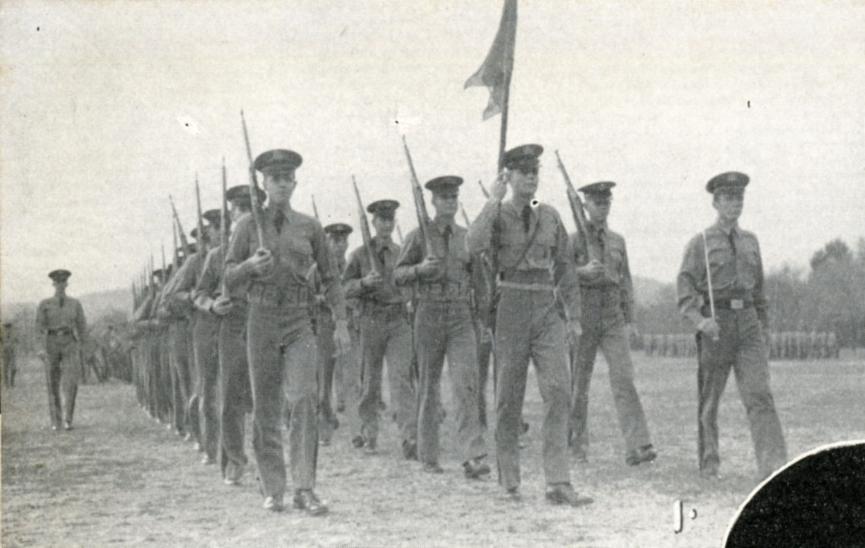 Even with the second World War occurring, cadet life was not affected by any means. Formations were still in effect three times a day, parades were still dreaded by the corps weekly, Crozet was open and serving meals, and formal events such as Ring Figure still went according to plan. From the outside looking in, cadets were aware of the current events transpiring in Europe, however, that did not hinder their experience as cadets at the institute. In 1943, the Army Specialized Training Program (ASTP) required the use of nearly all VMI cadets to serve during the war, leaving all but three medically disqualified cadets to study and graduate from the institute. Later in 1944, the Superintendent, Major General Charles E. Kilbourne implemented a new rat system for the incoming classes that limited the interactions between upper-class cadets and rats allowing for a heavier focus on military training. 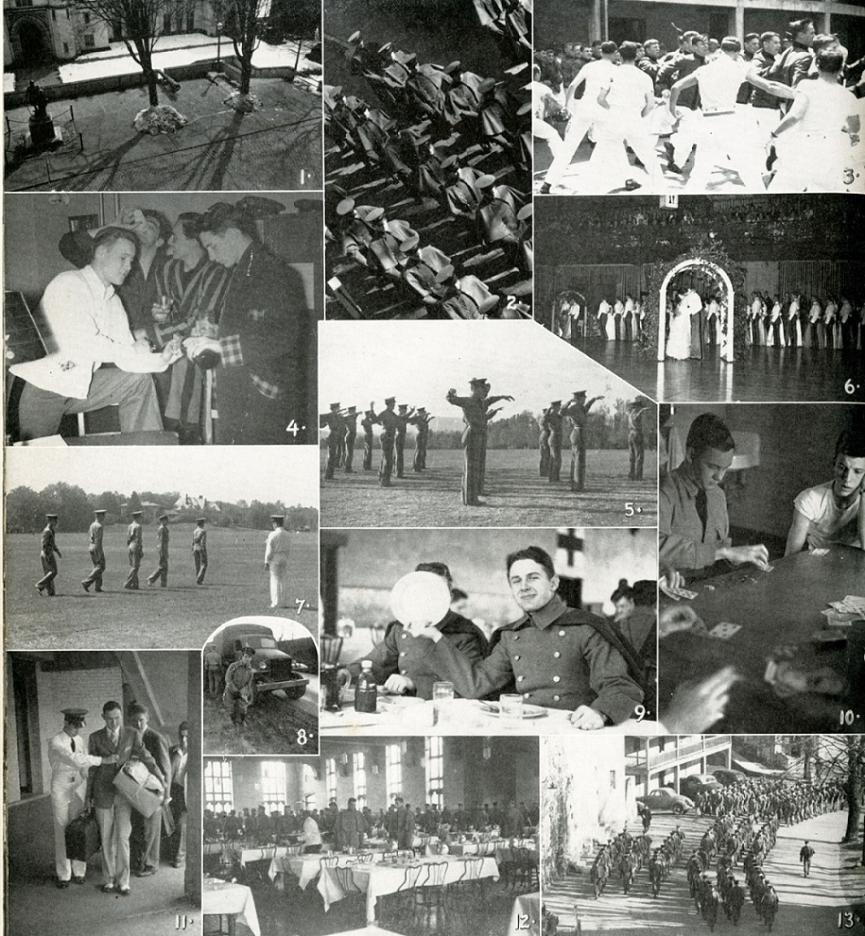 Cadet Richard C. Niess was a member of the class of 1944. He matriculated during the beginning period of VMI war preparation and the following was his experience. 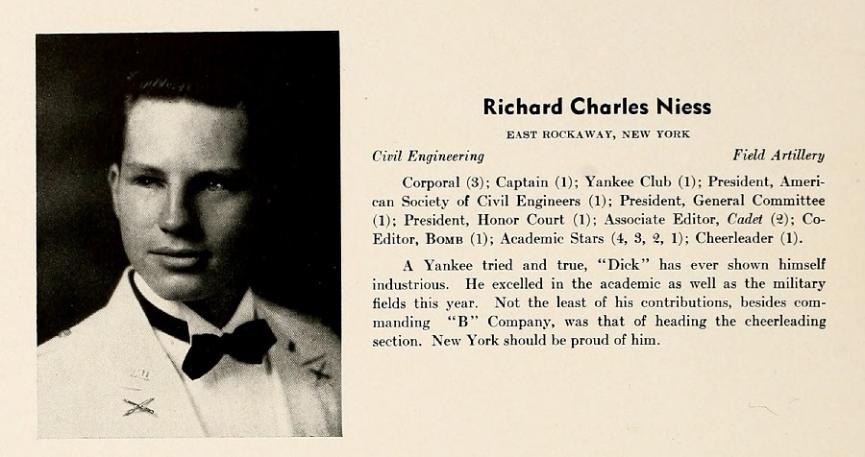 1941: “As I recall, 7 December 1941 dawned a pleasant late fall day in the Valley of Virginia. As we tried to assimilate what had happened, many cadets assembled on the stoops to discuss events and to begin to realize how enormous implications this would have on the lives of all of us. There was no doubt that many would no longer be citizen-soldiers and some would never return.” (Niess, 1)

1942: “I don’t recall when ASTP (Army Specialized Training Program) troops started to arrive but that was the biggest change in the overall structure of the institute. Now we had two Corps, so to speak; the regular cadets in grey who were governed by the VMI regulations, the Honor Court and General Committee rules, and the Army ASTP troops in khaki who were governed by most VMI regulations, but not the GC and not the dedication to the Honor System.” (Niess, 7)

1943: “The real changes came in May 1943. Not only did the class of ‘43 graduate, but most of the class of ‘44 was drafted into the service. The third subject came as a real shock... we found out it was expected that we would be the only three cadets returning for our first-class year. Pat Wen because of his nationality, Burt Beatty because of his minor disability caused by the Polio attack, and myself because of the loss of my right eye from the “bomb in the courtyard” event in September 1941.” (Niess, 11)

1944: “In late January of 1944, we three remaining classmates, (Pat, Burt, and I) assembled for the last time in Jackson Memorial Hall for a full-scale graduation exercise for probably the smallest group to receive the treasured VMI degree diploma. It was with great gratitude that I accepted the second Jackson Hope Medal (and have treasured it over the years).” (Niess, 29) 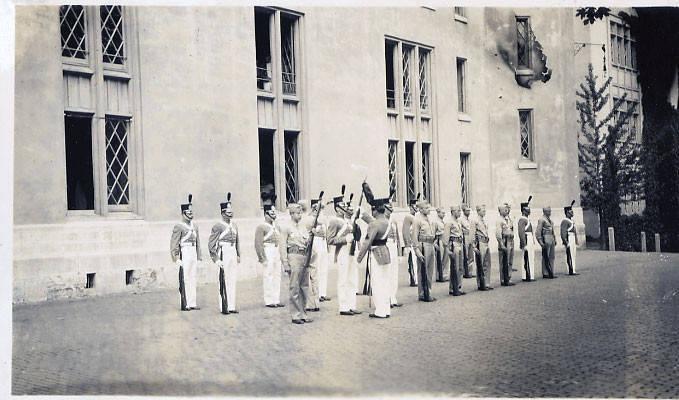 Guard mount image from a photograph album compiled by Richard C. Niess, Class of 1944, during his cadetship. The album includes images of cadet life, individual cadets, buildings, and athletics. Part of the VMI Photographs Collection.

This page from the 1948 Memorial issue of The Bomb, the VMI yearbook, represents all of the VMI Alumni who gave their lives in service of our nation during World War II. The classes from 1902 to 1947 all lost cadets during this period. This Bomb is a reflection of the brave men that were products of VMI and continued after as valiant leaders. The memorial page displays a soldier's profile over a national cemetery with the American Flag flying above the graves. The page holds the names of over 200 Alumni, each being organized by class. 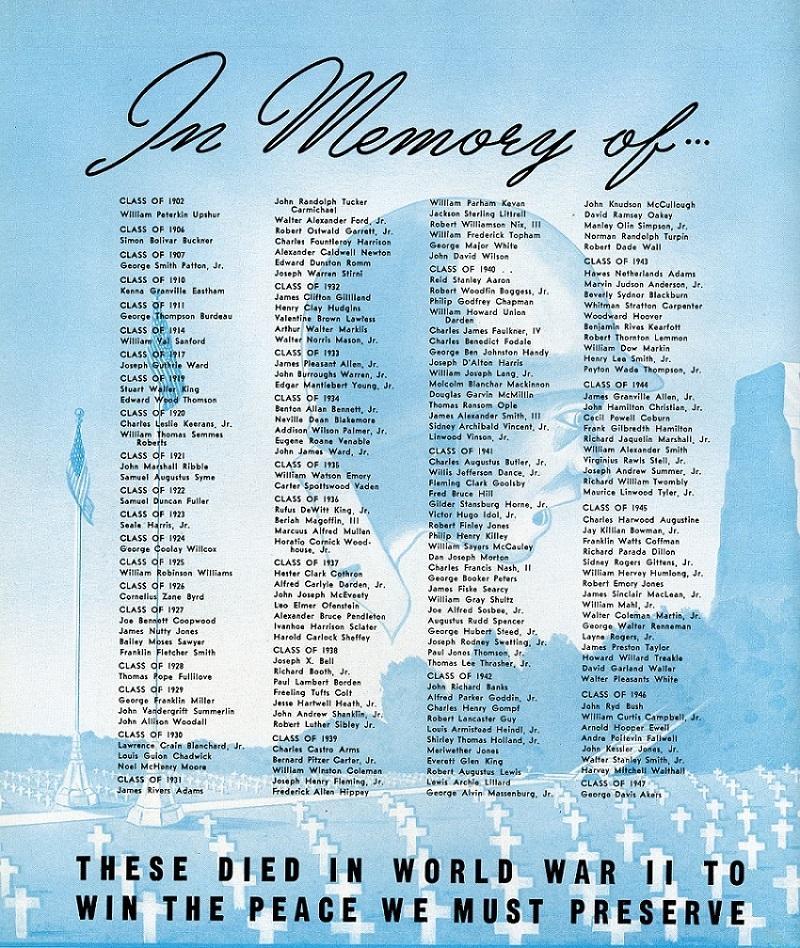