One of the foundations of VMI’s success is the Class.

A VMI Class is a brother and sisterhood of cadets who matriculate together, progress through the VMI system, and after four years of academic, athletic, and military excellence, graduate together. It is a system which distinguishes VMI from any other institute of higher learning. It is a system which forges lasting bonds and friendship with cadets of the same Class; bonds which last forever.

At VMI, the Class system is unique. At most colleges, first year students are freshmen. New cadets at VMI are “rats” first, and after the extended “boot-camp” called the Rat Line, they “break-out” to become the 4th Class. While other colleges have sophomores, these are the 3rd Class at VMI. There are no juniors at VMI; they are called 2nd Class cadets. Seniors are the 1st Class at VMI, and they are the senior leaders in the VMI Corps of Cadets.

The term “brother rat” applies to members of a VMI Class and is endeared. Its symbology is deep, as it identifies a VMI cadet as a member of a Class who has navigated through the hardships and successes of the VMI system.

VMI’s Class system unifies cadets from all backgrounds, ways of life, and diverse locations into one. Through the VMI experience of tough academics, demanding physical fitness, and a disciplined regimental system, fellow cadets associate with each other as “brother rat”, which is a term of respect and devotion among VMI classmates and graduates.

When they first arrive, new cadets join companies that they stay with throughout their cadetship at VMI, forming camaraderie and life-long bonds with other company members. Throughout their first 6 months, cadets receive advice and moral support from 1st Class mentors/role models. 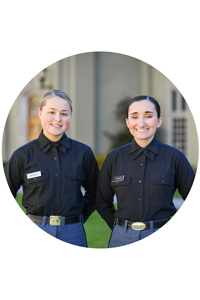 "Guiding a new cadet through such a transformative time is extremely rewarding. I've learned to be more patient, understanding, and encouraging to others. I tried to teach Rat Caroline Lassalle '25 that you only get what you give at VMI. If you learn to embrace tough situations - 'the suck' - and never quit on yourself, then you will succeed. There is no other rat that I would rather have carry out my legacy here at VMI than Rat Lassalle."

All new cadets at VMI begin at the same level, as “rats”. VMI has a single-entry enrollment, which is as a first-year cadet. During the first part of a “rat’s” cadetship, new cadets are placed in the Rat Line which is a designated line in Barracks where “rats” walk, and it is a system of intensive training and discipline to build concentration, attention to detail, resilience, self-discipline, a sense of humor, and life-long friendships.

“Rats” do not have privileges, since they are new to the VMI system and in an apprenticeship to becoming a Leader of Character. 3rd Class, 2nd Class, and 1st Class cadets earn many privileges, including the opportunity to lead their peers and subordinates, and setting and maintaining moral, academic, military, and professional standards.

A board of cadets is voted into office by each class to oversee the Class system and student government of VMI. This board is known as the General Committee, abbreviated as the GC. After Spring Furlough, each class elects officers to join existing GC members in upholding VMI’s standards and the great traditions of the Corps of Cadets, enforce Class privileges, and represent cadets when interacting with VMI administration.

GC committees monitor every facet of cadet life – from Class privileges to the appearance, discipline, and reputation of the Corps of Cadets.

VMI’s inclusive Class system is uniquely successful in taking strangers and forming them into a cohesive and comprehensive group. The VMI Class system presents equity and fairness in managing the interactions between hundreds of cadets. The Class system is foundational to the Virginia Military Institute in governing the Corps and is tried, tested and true. More importantly, the VMI Class is a group of “brother rats” who remain connected across their entire lives.